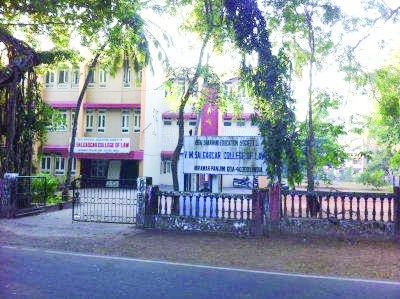 GENEROUS: Realizing the need for a law college it was the late VM Salgaocar who started the Salgaocar Law College in Miramar, Panjim

While the pioneers of industry in Goa were very generous and fully conscious of their corporate social responsibility, Gen Next is not even willing to pay part of the salaries of mine workers who helped them make billions during the Chinese iron ore boom

Disparity in wages between the rich and the poor is not unique to Goa and India. Indeed it is a worldwide phenomenon. A major reason is the growth of IT which is much less labour intensive than manufacturing. The world over manufacturing has undergone a major change. Increasingly, manufacturing is being automated, with robots replacing human beings.
A number of administrative jobs which involved individual effort have now also been automated. The number of bank employees have sharply reduced with the very fast development of ATMs and electronic transfers. The greatest drop in employment is in public sector in India with automation of even mundane tasks like issuing of birth and death certificates. There will be soon no need for a registrar of land records and a civil registrars office as it can be made available online.
Thanks to the GPS system you do not need either lakhs of human beings or physical mapping of geographical areas. Even in Goa there are plans to upload all the land survey maps on a special website, so that not only are claims to ownership confirmed but disputes can be minimized.
Blue collar jobs, i.e. jobs in manufacture, have already diminished a great deal. Now it is the turn of white collar jobs. There may come a time when transport might become redundant as all communication can be done online. In fact with artificial intelligence you may not even have to think, as machines will do most routine jobs for you.

The IT revolution has empowered the lowest sections of society. The smart phone does not distinguish between a PHD and a 10th standard pass. In fact it is been found that the semi-literate make better IT workers than the highly literate. Coding for instance does not require expertise in the nuances of English or any other language. What it demands is a high degree of logic and an ability to concentrate.
The main concern is whether the number of jobs will reduce in absolute terms. This is unlikely as any new technology will require additional workers to function. However income inequality will drop as more and more of the population become not literate in a conventional sense but computer literate.