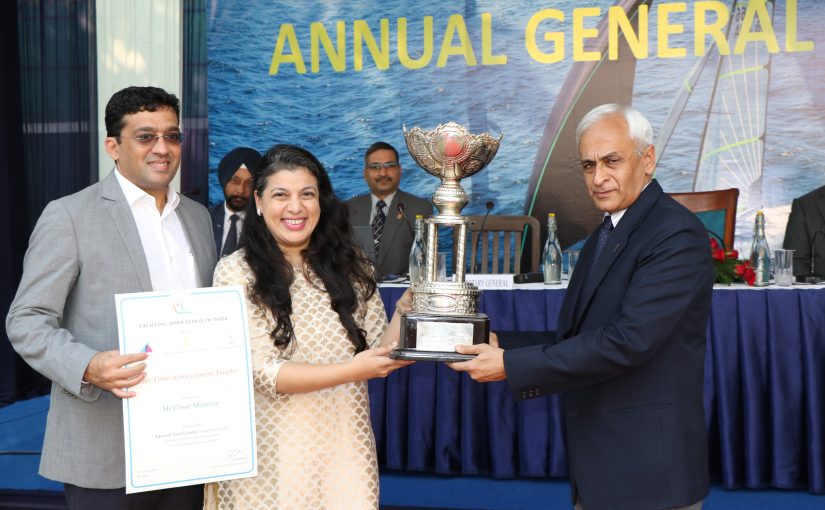 Passionate about sailing, Cesar Menezes made the sport accessible to countless young Goans and was his contribution was recently recognised with a richly-deserved Lifetime Achievement Award…e muscle weight is good!”

At the recently concluded AGM of the Yachting Association of India (YAI), the Life Time Achievement Award was conferred upon Cesar Menezes, President Emeritus of Goa Yachting Assciation (GYA) for his outstanding contribution to the sport of sailing in India. As Mr Menezes was travelling, the award was collected on his behalf by his daughter Rashmi Menezes and son in law Vinay Pinto at a glittering Awards ceremony held in New Delhi at the YAI AGM. The Award was presented by President of YAI Admiral Sunil Lanba, retired Chief of Naval Staff. This is the highest recognition for an individual’s contribution to the sport of Sailing in India.
Cesar Menezes was instrumental in the formation of the Goa Yachting Association in 1973 and was its founding general secretary. He purchased many sail boats and got Goan youngster into the sport of sailing. Goans soon started to excel in the enterprise class and the sport grew gradually.
Cesar also participated in the State Championships in the enterprise class and won the gold for several years. He represented Goa at the National Championships in the Enterprise class and put up a creditable performance.
He organised the Enterprise World Championship in Goa in 1997 and again in 2002. He also organised the OK Dinghy World Championship in association with the Army in 2003 in Goa.
He has organised the Goa State Sailing Championship for almost 40 years and now for the past five years has been a part of the organising committee as mentor and president emeritus.
In 1980, when windsurfing became a popular sailing class abroad, Cesar formed the Windsurfing Association of India (name later changed to Board Sailing Association of India), and helped promote and popularize windsurfing in Goa and all over India. He hosted the first National Windsurfing Championship in Goa in February 1980.
Over the years, he purchased dozens of windsurfing boards and helped Goans excel in the sport. Due to his efforts, Goans have dominated the sport of windsurfing in India winning golds for more than 30 years over the past 39 years.
He promoted, sponsored and organised the Boardsailing and RS:X class National Championships (currently called the All India Board Sailing Championship) for the past 35 years.
Due to his efforts, several Goans represented India and won medals at the Asian and other international and world Championships. Many a times the entire expense of these international participations was borne by Cesar.
In the late 80’s, Cesar saw the popularity of the optimist class at the national level and realized the need to promote optimist class sailing amongst young children in Goa, so as to give them an early start in sailing.
He purchased seven optimist sailboats and started the promotion of optimist class sailing in Goa. Within a short period of barely two years, Goan sailors made a mark at the National level, and soon won gold medals at the National Championships and represented India at international championships. He organised the Optimists Nationals in Goa.
Cesar’s singlehanded contribution to promotion of sailing in Goa, was recognized by the Govt of Goa, and he was awarded the highest State sports award, the “Jivbadada Kerkar Award” in the year 1994-95
He was on the Executive Committee of the Goa Olympic Association. Cesar was also elected on the Executive Council of Yachting Association of India, as the representative of the Boardsailing Association of India and served on the YAI Council for several years in the 1980’s and 1990s.
Of late Cesar saw that many of India’s earlier national and international champions were now sailing in the Seabird class, but there were no competitions for them.
In 2018, he decided to host the “75 Knots sailing Regatta” for Masters, in the Windsurfing and Seabird class of boats, to bring back the old veterans of sailing together once again and sail together in a friendly competition. The chief guest at this event, late Vice Admiral Manohar Awati, at the age of 92 years travelled almost 600 kms by road to be a part of this event.
He hosted all the veteran sailors in Goa, meeting all the expenses for their lodging and boarding in Goa, for transportation of Seabird boats from different parts of India to Goa and back, and all other championships expenses.
The 75 Knots regatta was a grand success and won kudos from all the top sailors of yester years.
In 2019, he once again hosted the 75 Knots Regatta in Goa, on the popular demand of the master sailors
To make this event even bigger and better he also sponsored and supported GYA to simultaneously host a Multi Class National Ranking Event so that youngsters could interact with veterans and their experience could percolate to the new generation. The championships were a grand success and won high praise not only from sailors, but also from members of the International jury, and representatives from YAI, SAI and INSA.
Cesar Menezes’ yeomen service to promotion of yachting in Goa and India over 45 years has been recognized at the State and National level and is unsurpassed in the annals of yachting in Goa and India.