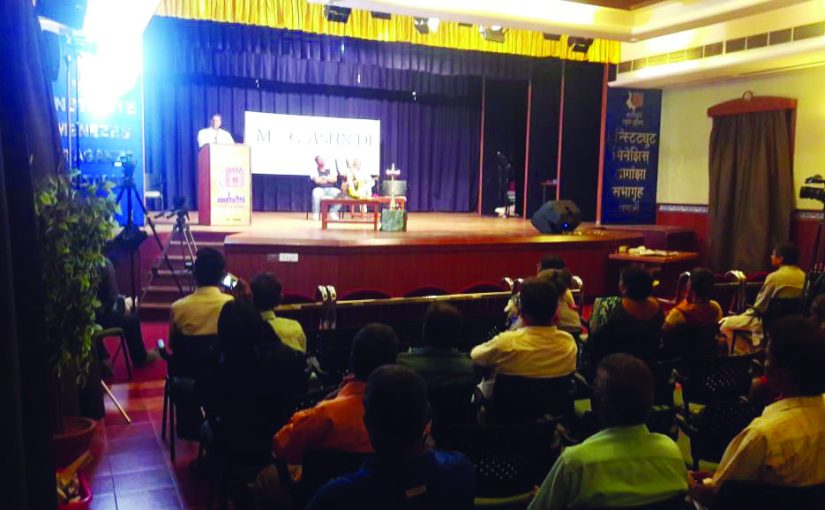 REMEMBERING FR BISMARQUE! Like every year, friends of the late environment-crusader Fr Bismarque, organised a program to pay him homage on his 4th death anniversary, at the Menezes Braganza hall in Panjim on Wednesday, November 6. “This remembrance is with a purpose. Every year, we bring the opinions and experiences of environmental experts and veterans to the public so that this awareness manifests into action. Last year, environmental activists Dr Claude Alvares, Fr Michael, Rajendra Kerkar and Edgar Rebeiro, led the remembrance proceedings. This year, three ground-level environmental foot soldiers — Sandeep Kambli, the secretary of Mopa Vimantal Peedit Xetkari Sameeti, Custodio Dsouza, the president of Old Cross Fishing Canoe Owners Cooperative Society Ltd from Vasco and Abhay Sahoo, the veteran mass leader from Odisha of POSCO fame — who fought hard to save their villages from corporate-style take-overs, will be present”. This is quoting Sudeep Dalvi, a close friend and associate of Fr Bismarque. Fr Bismarque put agricultural concerns and livelihood first before any industrial development and progress

THIS is what Karnataka does to its neighboring states on water issues. This is what they have done to Tamil Nadu on Cauvery water, their only source of drinking water. “In 1990, Cauvery Water Disputes Tribunal was set up. In 2007, the tribunal declared its final award, in which it said Tamil Nadu should receive 419 tmcft (thousand million cubic feet). In August 2016, Tamil Nadu government said that there was a deficit of 50.0052 tmcft of water released from Karnataka. The Karnataka government said it wouldn’t be able to release any more Cauvery water due to low rainfall.”
Let’s not allow similar fate for our Mandovi river. Let’s unite and fight back, as it for the survival of our Goa.
— Julio Aguiar, Goa

STEP BACKWARDS
Very retrograde and skewed is the decision of the Goa Cabinet to relax the minimum educational qualification of Officers on Special duty (OSDs) to Ministers. With these OSDs being paid close to a lakh a month from the State coffers, the public are entitled to have well educated and qualified persons appointed to the post which cannot end up being a political appointment. Downgrading the educational criteria by now allowing a 12th Std or diploma holder to be an OSD is a step in the wrong direction which will adversely affect the quality of administration as an OSD to a Minister has a multi-dimensional role to play. Even for the peon’s post in our Courts the minimum educational qualification is 12th. .
The government should realize that nothing can replace the requirement for sound and quality educational qualifications as a pre-requisite in discharging duties of any job. After the BJP came to power in 2012 we have seen thousands being brazenly recruited into government service with merit absolutely thrown to the winds. It has been a deceitful attempt to create a vote bank or jobs for sale to the highest bidder. All this is reflecting in the functioning of the government offices with very incompetent staff having managed to creep in with the blessings of their political godfathers.
Any political interference and manipulation in the selection of government employees is unacceptable. The selection, promotion and transfer of all government employees should be totally insulated from any political machinations whatsoever. It should be strictly on professional merit and merit alone should be the sole criteria in the selection and appointment of every government employee to any post.
Nobody should ignore the fact that the government employee’s first priority is to represent and work in the best interests of its citizens. Government officials like Ministers are accountable to the people. It is the people that pay for their services through their taxes and they are entitled to demand value for money and expect to receive the best service. This is only possible if those appointed are well educated officials recruited on professional merit in an open and fair competition and execute their responsibilities with honesty, integrity, objectivity and impartiality.
— Aires Rodrigues, Ribandar

STATE GOVERNORS
STATE governors are only deemed Head of the State and do not have absolute powers, but do have some power. The post is given to politicians at the fag end of their careers as a reward. The outgoing Goa governor Mridula Sinha proclaimed she wanted to do something for Goa but contributed nothing – despite the many opportunities including the Mhadei water diversion opportunity, despite her own party being in power at in State and Centre.
She was also Chancellor of Goa University — its rank during her tenure, as per National Institutional Ranking, slipped down from 20 in 2016 to 64, then 68 and now 93! The VC still holds his post and has even tried to get administration of GU to be under the government — giving up present autonomy. In 2016, he got the Parrikar government to agree to abolish the rule of first seeking local residents for posts. Now, even posts of security, contracts for housekeeping, etc, are not reserved for locals.
Formalin-preserved fish, deliberate engineered mass migration purely for vote banks, especially from her State, are other issues. Perhaps Mrs Sinha did something we Goans know nothing about, media freedom being what it is today! She planned on writing a book on Goan culture. Goans need to be apprehensive about this considering her views about parents having only single children.
The new governor has been sworn in but we have yet to see him. Right now his presence in Goa is compromising the safety of Goa and Goans. Goa has to date been spared terror attacks and it was not wise to transfer him from Kashmir to Goa, especially since Goa is an international tourist destination and the tourism industry is fickle. At the fag end of his career better the new governor retires. I hope he refrains from speaking about doing something for Goa and Goans. Ditto for collectors in Goa who have been found wanting in all areas.
— R Fernandes, Margao

CONSERVE MOPA
IT is the duty of the Minister of Environment & Forests & Climate Change to protect the environment. The Mopa plateau is an extension of the Western Ghats and a United Nations-recognized conservation area with its 54,676 trees which are fruit bearing as also the lungs of the area, replenishing air with oxygen by photosynthesis. The Mopa plateau is also home to a wide variety of wildlife such as pangolin, bison, porcupine, civet cat, wild boar, tiger, macaques and birds, butterflies, etc.
There are 46 crystal clear fresh water springs. When despite 170 inches of rain Goa is facing a drinking water scarcity it would be counterproductive to destroy Mopa plateau with its natural springs. The Minister of Environment & Forests & Climate Change should care for the cause of environment and shift the idea of another airport to some arid area in Karnataka or Maharashtra.
Goa’s Mopa plateau deserves to be conserved and protected at all costs. Climate change is critical on the agenda of every country today and with this in mind it is better to scrap Mopa airport in favour of conserving the natural wilderness of Mopa plateau.
— Elvidio Miranda, Panaji