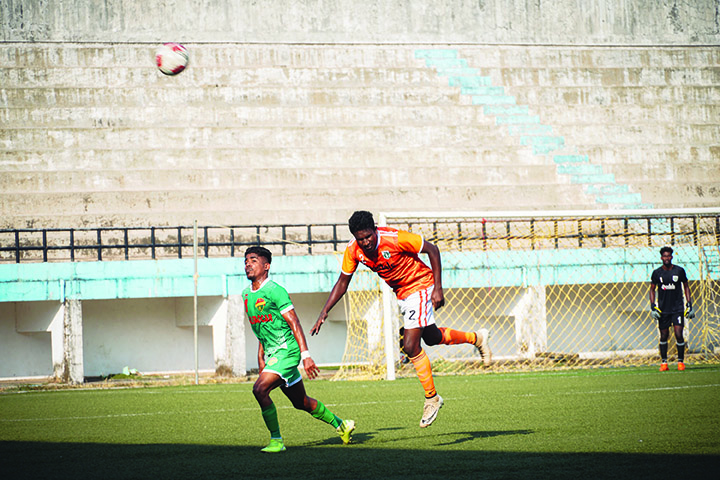 Salgaocar FC down sporting clube: Salgaocar Football Club scored an impressive 2-1 win over Sporting Clube de Goa in the Goa Professional League at Duler Stadium, Mapusa, on Tuesday. Saeesh Halarnkar and Stephen Satarkar scored for the Green Brigades while Marcus Mascarenhas had scored for Sporting. At the 90th thrilling minute Salgaocar scored the second through Saeesh Halarnkar. Salgaocar’s Godfrey Mascarenhas’s shot from inside the box was saved by Sporting keeper Melroy but the ball fell into Saeesh’s feet who smashed the net from close, 2-1.

Further to your Stray Thoughts (GO, Jan4 2010) on the subject of `Manipal Cancer Loot’ I’d like to bring to the notice of all concerned the following incident as per my information. My neighbor, a young man, suddenly fell sick at home and his wife immediately rushed him to Manipal hospital which projects itself as the best in the state, providing best treatment. That is not correct.
The patient was admitted in ICU as doctors diagnosed heart problem with six blocks, needing immediate operation. The wife with confused mind approached some knowledgeable seniors who advised her to immediately take the patient to the GMC – where after thorough examination by expert cardiologists, it was found that he had a minor heart problem without any blocks. Within four days the patient was discharged and is now doing well at home and at workplace.
What a way to commit thievery by this lootmaar hospital! If the operation had been carried out it would surely have been a financial disaster for the poor patient. Isn’t there anyone in Goa who can look into this kind of hara-kiri the hospital is doing?
While on this subject let me ask the people and authorities concerned where the huge amount of donation the Gulf Goans sent for the construction of Cancer Hospital at Dona Paula gone? According to my information Kuwait Goans alone sent about Rs20 lakh, besides money coming from Abu Dhabi and elsewhere. Will anyone take some pains to disclose where these donations went?
— A Veronica Fernandes, Candolim

GOVERNMENT PRIORITIES?
IN Governor’s address in the Goa Legislative Assembly he declared that safety and security of tourists, women and children are topmost priorities of the government. Does this man safety of locals is not a priority?
Just before last Christmas and New Year the government instructed police not to harass tourist vehicles and advocated a single tag to be fixed at the border which would give the vehicles carte blanche freedom to travel anywhere in Goa. A 4-wheeler from UP took full advantage of this and travelled all over Goa without number plates. When accosted by a local citizen the cops sided with the 4-wheeler folk and apparently dashed the woman’s vehicle. Then cops had the audacity to instruct the woman to sit in the 4-wheeler – the one without number plate – to accompany the police to Mapusa Police Station.
The Governor’s statement means that locals be treated as second class citizens! A majority of hired vehicles and especially 2-wheelers hired by first time tourists endanger the lives of locals. Post-Sunburn and New Year events social media shows how the safety of locals is compromised as tourists are allowed to do whatever they want. They were drinking from glass beer bottles and chucking them on the beach. Making the sand hazardous with broken glass.
If the Govorner is really concerned about the safety of tourists he should tourist safety he should ensure no death by drowning. It means strict control and monitoring of beaches and observance of beach rules by tourists. Tourists without driving licenses must not be allowed to ride even gearless 2-wheelers. Safety can come only rules are followed by tourists and codes by the government officials. As it is in a 4-wheeler can get away in hit-and-run cases or easily kidnap anyone. I is important yone. It is important the message goes out to tourists to observe rules.
The Governor mentioned crime detection rates. As far as safety of children is concerned will he let us know how may kidnapping cases took place in 2019 and their status? How many rape cases and convictions took place? If children and women’s safety is a priority this date should be noted.
It seems the Governor is well tutored by tourism stakeholders to the point where locals are reduced to second class citizens. Coal dust, inoperable Sonsoddo garbage treatment plant, lack of sewage treatment plants along coastal areas, rash driving by tourists, noisy rave parties in neighborhood — all this affects the safety and health of local residents and this should be a priority surely?
— R Fernandes, Margao
RIGHTWING FASCISM?
JUST for reflection, it’s interesting to look at the 14 features of fascism Umberto Eco collected in 1995. This predates the current European right-wing movements and it is therefore especially scary to see how many of the features are visible.

BHARAT JALAO PARTY?
PRIME Minister Narendra Modi and Home Minister should resign immediately for deliberately taking their own sweet time instead of acting quickly against culprits targeting the JNU campus, students and staff. They were allowed to walk in and out freely despite vital clues on CCTV cameras. The goons systematically beat up students, teachers, going to the hostels with their sticks and iron rods, breaking windows, furniture, personal belongings and creating mayhem – all in front of the police!
BJP leaders are trying to take over prestigious universities to sow seeds of hate-based religion and calling students tukde tukde gang for daring to speak up. BJP and Sangh Parivar don’t have guts to debate issues but can hire gangs to brutally silence the right of students to dissent and protest non-violently.
We Indians should not worry about “tukde tukde gang” upholding rights of freedom, instead worry more about Bharat Jalao Party gangsters who believe in the dadagiri of ideology of one community, it’s an incurable disease just waiting to destroy the unity of India . Jai secular India!
— Jerry Fernandes, Saligao