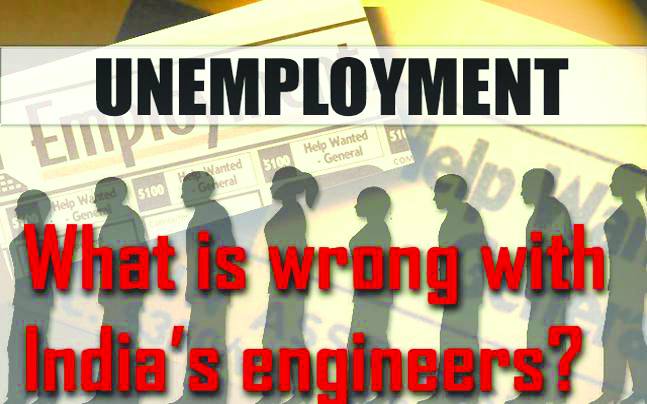 UNFIT: Less than 7% of engineers passing out every year are fit for IT jobs. There are lacks of engineering seats going vacant both in the country and in Goa. No one pays capitation fees and no one wants to attain the coaching classes in Kota and in Goa.

The present skills you have as graduates, post graduates, engineers and technologists are useless in 2020. In the world of Artificial Intelligence and 3D printing you have to go back to school to cope with the new world.

OVER the last decade our planet has been changing rapidly. Even a decade ago we could not have imagined that we could sit in our armchair and talk to our family relatives and friends in the United States. Not just talk to sisters and brothers and parents but also see them at the same time in video calling. There was a time when only the very rich could afford to make a video call. Now with WhatsApp, True Caller and Messenger has changed all that; rich or poor, literate or illiterate, can make a video call from anywhere in the world to anywhere absolutely free.

Not perhaps absolutely free because you need an android smart phone available for as little as 5,000 or as much as50,000 – but more importantly, you need Internet. Which again has come down drastically in price since Reliance launched its Jio. So the gap between literate and illiterate, the gap between upper caste and lower caste, the gap between highly qualified and uneducated, has disappeared.

Now in 2020 the skills you will require to get a job have dramatically changed. Already in most traditional factories in the United States manufacturing automobiles or steel components there are more robot teams than human beings. Robots who do not get bored. Robots do not make mistakes due to fatigue. Robots are much faster than the average human being and ten times more productive. It did not start in the 90s or beginning of 2020. We have an example of how technology replaced labor in Goa as far back as two decades ago.

There was a factory making pesticides at Santa Monica in Old Goa. Property which was sold by the Church to a multinational called Sandoz. The factory changed many names due to international mergers and changes in ownership. At the time I am talking about which is 20 years ago the company was called Novartis. It’s a beautiful property with a lake in the middle of the property. The lake was abused by the company to claim that its by products did not create any pollution. There was fish in the lake and the effluents from the production of pesticides were released into the lake to prove that the effluents did not affect life in the water. It was a top secret that had a fine mesh and the effluents released were cleansed before being released into the lake. It was the company showpiece to prove that a deadly pesticide the company produced did not produce any effluents. How deadly it was, was demonstrated when the patient of a well-known doctor in sough Goa got a small sample of the pesticide from a manager in the plant and in a fit of absentmindedness stored it in a cough mixture bottle. When the doctor had a cough his wife who was not aware that the cough mixture bottle contained a pesticide gave him the bottle to drink what she thought was cough mixture. It took six months for the doctor to recover even after the antidote to the pesticide was identified and procured.

BUT the real story is how the factory reduced its manpower from 5,000 workers to just 100 supervisors. Bombay trade union leader, Datta Sawant took over the union and called for a strike which lasted for a year. Like Datta Sawant and R J Mehta closed all the textiles mills in Parel in central Bombay because they knew real estate was more profitable than the textiles produced, they also tried to close Novartis. The multinational was smarter. They automated the process in the factory with CNC machines and brought down manpower from 5,000 to a 100. Instead of thousands of workers there were just a 100 officers monitoring the computers which run the factory.

In 2020 humans are going to become redundant. Already a majority of American automobile companies, particularly in Detroit, have replaced humans with robots. So have the huge factories manufacturing civilian and military aircraft. The driverless electric car by Telsa manufactured by Amazon founder Bezo is already ready to hit the market. In California which is the HQ of Google the managers use electric, driverless cars. Before the turn of the century we will be liberated from the taxi mafia, as both Mahindras and Tatas have already started making electric cars. Electric two-wheelers will be in the market much sooner. Petroleum will become obsolete and be replaced by electricity and biofuels. So soon we will not need drivers and we will not need huge polluting refineries.

Turn to the financial world. Let us start with a very small example. In the OBC bank where we have both our office and personal accounts there was an ex-serviceman with a first-world war vintage gun guarding the bank and ATM. He has been replaced by electronic sensors which to the irritation of bank staff go off when they open their tiffin carriers to warm up their lunch during lunch time. Soon we will not have ATMs or bank clerks because everything will be digital. All you need to do is to transfer your money from your account to the account of the person you have to pay. With the introduction of several digital payment devices like Rupay and even Google Pay you can even settle a tiny bill for a cup of tea through a digital transaction.
And talking of cups of tea you do not need to use Swiggy or Zomato only to deliver food. Already a company has been formed which will supply garam chai at your office desk table for 30 only in a special cardboard box. This will get rid of all chaiwallah including Narendra Modi! In overcrowded cities like Bangalore nobody will patronize the highly reputed Udipi hotels like MTR. On a recent visit to Bangalore I found all the famous Udipi joints empty of customers. They were not bothered because they had an army of kids with cycles to delivery breakfast or any meal to anyone who needed it. In another part of this issue we have carried an article which reveals that less than five percent of the engineers who pass out of thousands of engineering colleges are qualified for software jobs. Companies like Infosys, TCS and Wipro, which used to hire lakhs of engineers at the entry level have stopped doing so. To the contrary they have even started sacking people at middle and senior levels of the rank of vice-presidents earning salaries of between50 to `100 lakh a month.

This is because due to the widespread influx of artificial intelligence these middle level managers are not generating enough revenue for the company. IT companies are all about body shopping. Every engineer has to earn ten times the salary he is paid. If for no fault of his but because of developments in technology he is not able to earn money his employer — out he goes. Companies don’t want mechanical engineers because there are robots taking care of conveyor belts in the manufacture of consumer durables and automobiles. They do not need even civil engineers because bricks and even entire buildings can be made through new 3D printing technology. Just as you make copies from your computer printer or Xerox machine these 3D printers can manufacture any item you want at very reasonable prices.
Don’t take our word for it. Visit Sai Dental Clinic in Mapusa. Here Mohini bai and her two sons have a dental CT scan which can take an image of your entire mouth and using the CT scan, they can literally “print” out your teeth in minutes if not hours. A tooth of mine which had broken was replaced in exactly ten minutes.

LET us turn to medicine and have a look at the revolutionary changes here. We are not only talking of consultations online with the best doctors in the world but also talking about human reproduction. Once upon a time you needed a man and a woman to produce a baby. Now a man or a woman on their own can acquire a baby through artificial insemination and surrogate mothers. It is not only Sharukh Khan, Aamir Khan and Ekta Kapoor who’ve become parents through surrogacy. What we presume is a middle class 37-year-old man originally from Pune now settled in Dubai had a baby boy in Goa, recently. The ethics of surrogate babies is of course another issue.
Transport is going to undergo a major transformation. Already in most computer companies people work from home and don’t need to go to office. I recall my sister-in-law from the United States working for her bank HFDC in Chicago from her Juhu flat in Mumbai while on a holiday. Transportation has also become redundant because you can communicate anything you want through today’s smart phone and Internet. You can use these devises not only for communication but to control household gadgets at home. They will turn on and off your microwave. They will sweep your house. They will put on the lights when they know that you have come back home. They will prevent any buglers or intruders, cats, dogs or rats from unauthorized entry into your flat.
As for health you may replace any part of your body and not necessarily only your liver or pancreas. Though I doubt whether being contemporary doctors or ancient rishi – any technology thing will be able to do head transplants as Narendra Modi claims Lord Shiva did with Lord Ganesh. But replacing parts of the body with prosthesis or artificial parts is now the name of the game. The cost of replacing an arse however may be as high as `50 lakh. I doubt if any ordinary arse can be replaced though, perhaps only Angela Jolie’s arse would be worth it.

We have entered 2020 and all the skills we have learned all these years are useless. They are not relevant to the new decade and new century. We are going to be teleported into a new world and Star Wars-style our children may live on or the moon. Already Bezo of Amazon has started booking passengers for private flights into space and the moon. Four Indian astronauts will enter space in the Gangayan spacecraft. We only hope that the Gangayan is less filthy than the river Ganga.
We will not need any national population register or national citizens register as we won’t need to commute and may work from wherever we are — there will be no Hindus, Catholics, Muslims or Parsees but only humanoids and robots. Welcome to the brave new world where you will need only a 10th standard to do the coding for the deadliest yet app which will allow you to shoot each other dead from wherever you are. Like PubG.