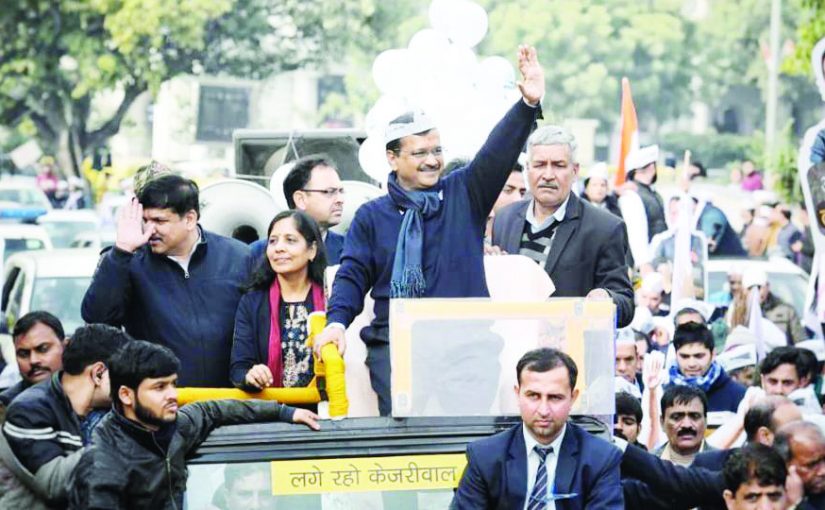 For the first time a state assembly election was got and won on the plank of good governance alone. All the abuse and dirty tricks of the Modi Government did not work. A single Arvind Kejriwal defeated the entire national cabinet, chief ministers of BJP ruled states and thousands of RSS workers polarizing the country on communal lines…..

ARVIND KEJRIWAL’S Aam Aadmi Party retains power in the country’s Rajdhani, New Delhi. Admittedly the tally of the BJP had come down from the unprecedented 67 out of 70 seats in the last elections to 51. This still represents a 2/3rd majority in the 70-member Legislative Assembly. Not the prime minister nor home minister or the entire New Delhi Cabinet of ministers could dislodge Arvind Kejriwal from power. There is a lesson to be learned from the outcome of the Delhi Assembly in which the BJP got only 19 of the 70 seats. The people of Delhi represent a mix of all communities and castes and they put performance over caste and communal prejudices. The electorate in Delhi rewarded AAP for its performance. For bringing about a radical improvement in government schools in the State capital.
Indeed, in the SSC and HSSC exams, government schools performed as well or better than the private schools. Even the middle class which stays away from government schools in favor of private schools have started putting their children in government schools which now have smart blackboards. For the benefit of those who may not know what a smart black board is, it is a computer scheme which is interactive. The schools of Delhi do not leak any longer. There are enough toilets for boys and girls. There is full-proof security so that girl students are not harassed. Buses transport the students from home to school and vice versa. Government schoolchildren have never had it so good. More significantly this means that the poor and those living in slums get education equal to that of the privileged and middle class. Dwarka School in fact topped the country in its results in 10th and 12th standards.
AAM AADMI VICTORY

THE Congress and the Modi government may have been screaming about roti, kapda and makan. But AAP concentrated on issues that directly affect the common citizen, aam aadmi. When they came to power the majority of Delhi slums and even middle class areas suffered from very erratic power and water supply. The power distribution companies were looting the public with huge power tariffs. Chief Minister Kejriwal had the guts to challenge even Anil Ambani whose Reliance was supplying power to Delhi at inflated prices. He ensured that every citizen of Delhi gets power at reasonable prices. Even more significantly he ensured that people living below the poverty line got a minimum quantity of power completely free of charge.
When Kejriwal took over the water situation was pathetic. Most parts of Delhi got water only for one or two hours a day. Kejriwal ensured that adequate water was available not only for khaas aadmi but also aam aadmi. He introduced rain water harvesting and recycling of waste water. Thousands of liters of water is wasted in Goa every day in the absence of recycling facilities put in place. Even sewage water can be recycled and used to clean toilets and for gardening, all other uses except perhaps for drinking purposes.
Perhaps the most innovative scheme started by the Delhi government was the mohalla clinic. Like our primary health centers which unfortunately don’t work most of the time, AAP set up mohalla (area) clinics in all parts of Delhi. The mohalla clinics are fully equipped with an entire range of diagnostic equipment and offer free consultation and treatment to the citizens of Delhi. They were fully equipped for qualified doctors. The mohalla clinics have been praised even by the World Health Organization as a model for community health care.
I remember reading a Facebook post. A young man had a very serious two-wheeler accident. He not only fractured his legs but had head injuries as well. He was referred to Gangaram Hospital which is one of the best hospitals in Delhi, patronized by Sonia Gandhi and other top politicians. At the Gangaram Hospital several several X-ray, CT scans and MRIs were done. A series of operations were necessary to restore the young man to robust health. The big surprise was at the end of two weeks in hospital, there was no bill. All the medicals services were completely free of charge. This was because of a scheme introduced by the Delhi government making it compulsory for all hospitals to treat accident victims completely free of charge. The young man was hoping to recover completely so that he could vote for AAP in the Delhi elections.
What is unusual about these Delhi elections is that people did not vote for caste or community. Despite the worst attempts made by the Narendra Modi government to polarize the electorate on communal lines. The notable example was the Shaheen Bagh protest by predominantly Muslim women against the Citizens Amendment Act (CAA) and the implementation of the National Population Register (NPR) which is supposed to start on April 1. For two months the women of Shaheen Bagh have been sitting on morcha day and night. They are determined to continue the struggle till they achieve their objective. The BJP tried its best to break the solidarity of the Muslim women of Shaheen Bagh.

THE BJP alleged that the women were agents of Pakistan. The BJP alleged that they were agents of AAP and the Congress who wanted to divide the country on communal lines. Minister of State for Finance Anurag Singh Thakur in the Modi government urged BJP supporters to shoot the protestors. It was further alleged that AAP was supplying biryani to the protestors. The BJP claimed that the protestors were blocking the road and local residents were very angry.
Arvind Kejriwal did not get provoked. He maintained a silence throughout. Never mind all the allegations and counter allegations by the BJP and the Congress. The Supreme Court deserves credit for permitting petitions against the protestors only after the elections were over. It has just admitted a petition to the effect that no group can block a road indefinitely. The SC has also taken serious notice of a four-month-old child who was part of the crowd protesting at Shaheen Bagh who died.
The SC rightly asked if it was fair to drag a four-month-old baby to a crowded rally. The Shaheen Bagh morcha sparked off a MeToo protest in Lucknow and in Mumbai which is being referred to as Mumbai Bagh. The BJP attempt to malign AAP using the Shaheen Bagh protest has had no impact on the electorate.
It is clear that the sun is setting on the Modi empire. In Delhi the Modi government used not only the entire Cabinet but senior leaders from neighboring states to campaign against Arvind Kejriwal. The BJP was still banking on the caste and the community factor. The majority of Delhi’s population are the Yadavs, the Gujars and the Jats from neighboring states of Haryana, UP and Rajasthan. So amongst the star campaigners of BJP were Swami Yogi Adityanath of UP and the Jai Ram Thakur who like in Goa stole the chief ministership from the Congress and AAP. But the people of Delhi rejected the caste and community factor. They rejected the campaign of the BJP claiming that AAP was full of desh drohi who are against Hinduism. Indeed, some BJP leaders even called Kejriwal a terrorist. The people of Delhi ignored all the charges made by hundreds of the top leaders of the BJP and thousands of the RSS cadres who specialize in booth management. Including the alleged rigging of EVMs. The biggest challenge before AAP was not before the elections but after the elections to ensure that EVM machines were not hijacked or tampered with. It was truly a David v/s Goliath battle.

THE BJP government lost the battle in Haryana but managed to form the government by inducing defections. Just as they lost the battle of the ballot in Goa and managed to form the government by getting Goa Forward, MGP and Independents to extend support to them. What happens to parties and MLAs who support the BJP is clear from what has happened in Goa. Vijai Sardesai who was the first to offer support of his group was removed from his position as deputy CM. Similarly, the BJP tricked Sudhin Dhavalikar by getting two of the three MGP MLAs to merge with the BJP. The Independent MLA who supported the BJP and was IT minister was not only sacked but an attempt was made to arrest him from the assembly premises, recently. The BJP lost the elections in Maharashtra to the Shiv Sena-NCP combined. The bells are tolling for the BJP. This is because Narendra Modi has failed in the most important promise that he made to the youth of this country. As Tavleen Singh, a former admirer of Narendra Modi, points out in her latest column, Narendra Modi was returned to power because jobless young men thought that with his Make in India campaign he would generate several lakh of jobs for the unemployed.
The reality is that millions of jobs have been lost because of the greedy economic policies of the Modi government led by demonetization and GST. The banks are bankrupt. Industry has slowed down with people buying fewer scooters, cars or tractors. The IT industry which was too hire several lakh of engineers just out of college has started retrenching even middle level staff of the rank of vice-president. Without creating jobs the Modi government cannot survive. And the next Lok Sabha elections are coming up in Bengal and Bihar…you can fool some of the people some of the time. You can fool all the people some other time. But you cannot fool all the people all the time.