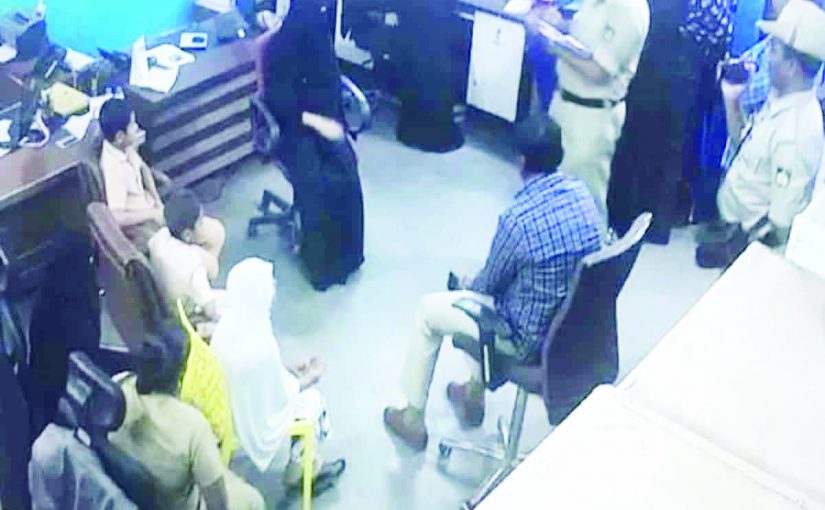 ILLEGAL: A school teacher a mother of a child who probably do not even know the meaning of sedition have been arrested for attempting to over throw the elected government

By Nida Najar and Swati Gupta

Even the school teacher the mother and the child which enacted a play opposing the CAA were arrested for sedition. The act of sedition can only be applied if there is a real serious attempt to destabilized the country through violent actions. The right to protest is fundamentalist as pointed out by Justice D.Y Chandrachud a SC judge who was addressing a public meeting in Mumbai….
‘
The police in New Delhi arrested a former university lecturer on suspicion of sedition early Tuesday, the second arrest in a week on the colonial-era charge, as student and teacher protests against the government continued.
The arrest of the lecturer, S.A.R. Geelani, came just days after the police arrested the student union president of Jawaharlal Nehru University, Kanhaiya Kumar, on a sedition charge.
India’s sedition laws, which date back to the British Raj, mandate prison terms ranging from three years to life. Though the Supreme Court has ruled that sedition charges apply only to speech that incites violence, the law has been used in recent years on apparently political targets: a cartoonist in Mumbai, or a group of Kashmiri students cheering the Pakistani cricket team, among others.
The police did not specify the exact grounds for Mr. Kumar’s arrest, though it seems to involve an event on Feb. 9 on the third anniversary of the execution of a Kashmiri militant, Muhammad Afzal, also known as Afzal Guru, for his involvement in an attack on Parliament in 2001 that left nine dead. Mr. Kumar was present at a protest surrounding the anniversary where the participants chanted slogans police described as “anti-national,” said the Delhi police commissioner, B.S. Bassi.
Though the university called off the event, videos circulated on television and online afterward showing people shouting slogans condemning Mr. Afzal’s execution and calling for India to be “split into pieces.” After the protest, a speech by Mr. Kumar was circulated online condemning a right-wing group and presenting himself and fellow students as the true defenders of the Constitution.
Legal experts said it would be difficult to prove sedition based on the content of the speech, which did not call for violence, but some said that the authorities were not concerned about making the charge stick.
“If it is brought to the court, in my view there is no case against him,” said Raju Ramachandran, a Supreme Court lawyer. But, he said, “in the meantime you’ve intimidated and harassed.”
He added: “It has a chilling effect, in a sense, because people would tend to think twice before expressing their views on sensitive subjects.”
A police official, Jatin Narwal, said that Mr. Geelani, formerly of Delhi University, has been arrested on the same charges of sedition and criminal conspiracy after organizing an event at the Press Club of India, where a group of people shouted slogans hailing Mr. Afzal, the Press Trust of India reported.

It was not clear whether Mr. Geelani had shouted the slogans, and Mr. Narwal declined to give details about the case. Mr. Geelani had been charged with involvement in the 2001 Parliament attack, but the Delhi High Court overturned his conviction in 2003, citing a lack of evidence.
Mr. Kumar’s arrest led to chaos on Monday at a Delhi court, where he was to appear at a hearing on whether to extend his detention. He never got there as a mob scene developed, with a number of men wearing black lawyers’ coats forcibly evicting reporters and attacking students and professors from Jawaharlal Nehru University who had come to support Mr. Kumar, reporters present said. Eventually, the hearing was held elsewhere, and Mr. Kumar was remanded to two more days of police custody.
Om Prakash Sharma, an assemblyman in Delhi from the ruling Bharatiya Janata Party, was seen beating a man outside the court in a video that circulated widely online. In a televised interview with India Today, Mr. Sharma said that he had been attacked by the man, who had been shouting anti-India slogans and was fighting back.
“They will hit you, abuse Mother India and then what will you do? Will you pray to him?” he said.
On the sprawling campus of Jawaharlal Nehru University, a wellspring for generations of left-leaning academics and politicians, students gathered on Tuesday to protest Mr. Kumar’s arrest. As the students held a sign reading “Release Comrade Kanhaiya,” teachers formed a human chain around them to protect them from assault, though there were no clashes.
“Who are these people to teach nationalism to this progressive university?” asked Bikash Mishra, a 30-year-old Ph.D. candidate in environmental science. “In a university, students should be free to discuss anything.”