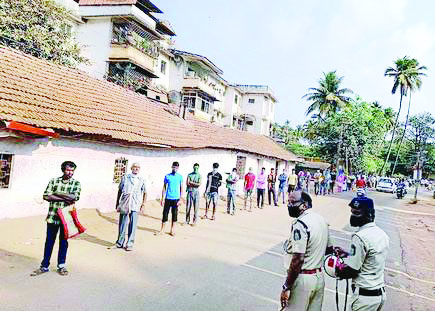 ONE METRE PLEASE!: As a nation and a state we don’t believe in queues. ‘Despite explanations by the CM and the police the minimum physical distance of atleast one meter is seldom maintained!

In Goa though we have not yet seen a single home grown case of coronavirus infection, Goans have been “imprisoned” for 21 days at home. Patience is running out because of the failure and incompetence of the government. Make provision of basic needs at home. Make sure that those rendered jobless are looked after for the lockdown period. Make sure there is no unnecessary and needless harassment. We are as anxious as the government to contain the coronavirus epidemic, but ask us nicely and don’t bully…

THE Prime Minister Narendra Modi finally has had to eat humble pie. Unlike his very high profile statement announcing the coronavirus lockdown on 21st of March, a very subdued PM apologized for the many cruelties he had inflicted on the people of India. And more importantly the voters who elected him to power on the promise that he would provide them with jobs by creating a five trillion dollar economy. Ironically, it is the very same prime minister who has been responsible for the large scale loss of jobs all over the country. Particularly among the migrant labor who work on a contract basis for the medium and small-scale industries which account for 80% of the jobs in the country.

We are back to ghar wapasi. All those who left the bimaru states – Bihar, Madhya Pradesh, Uttar Pradesh and Rajasthan, for jobs in the metropolitan cities are literally walking back to their villages back in Bihar, UP, Rajasthan and shamefully even the prime minister’s former home state Gujarat. A group of labor working for a large industrial house on the outskirts of Mumbai lost their jobs. Most of them were from Gujarat. Since they were paid on a daily wage they had no money for food or shelter. They started walking back towards their villages in Gujarat, from where they had come to Mumbai. The police at the border between Maharashtra and Gujarat send them back. While they were trudging back to Mumbai they were ironically hit by an ambulance carrying injured patients. Some of the labor who were turned away by their home state were badly injured in the incident.

In the first 48 hours after the lockdown the two wise men in Delhi Narendra Modi and Amit Shah did not realize the consequence of the lockdown. They did not realize the consequence of asking all industrial establishments to shut down. The majority of industrial establishments small and medium units which supply spare parts to the big daddies. For instance, it is not widely known that Bajaj Electricals which sells fans and a wide range of domestic appliances does not manufacture a single one of the household items they sell. They subcontract it to small and medium units to escape the liability of the social benefits that big industries have to provide. So when there is a lockdown the worst sufferers are the employees of MS companies which hire labor on a daily wage basis. No work, no pay. Moreover the wages paid are so low that they have only enough to meet their daily necessities of life like food and shelter. When they lose their jobs the landlord throws them out and they have no money to buy ingredients and cook food. The only option they have is to return to their home states which are ruled by the BJP. Such as Uttar Pradesh. When the wise men in Delhi discovered to their shock that the migrant labor were returning home, they were alarmed. They shamelessly stopped all the trains and even the buses from plying to prevent labor from going back. Nor were alternate arrangements made to retain the labor in the existing work place.

THE mass scale ghar wapasi of migrant labor created another crisis. Undeterred by the stoppage of trains and buses the migrant labor started walking back. Alarmed state governments startled by the movement back to villages literally beat the retreat. Policemen were deployed to beat up the ghar wapasi to force them to return to cities where they were working.

It took one Arvind Kejriwal, the chief minister of Delhi, to wake up to the enormity of the crisis. Only Arvind Kejriwal realized that we were witnessing an action replay of the Partition. The migrant workers had no choice but to return to their villages. The people of the villages did not want them as they were already suffering from squalor and want. They did not have the resources to accommodate thousands if not several lakh of the ghar wapasi. Clashes were breaking out between the locals and ghar wapasi in villages all over UP, MP, Rajasthan and Bihar. The Central government was also agitated over the fact that the bulk of the residents of the national capital Delhi, who were migrants from neighboring states, were moving out

Unlike Amit Shah who in his usual brutal fashion sent instructions asking the police to stop the ghar wapasi from returning, the savvy bania Kejriwal found a fresh way of boosting his vote bank. Arvind Kejriwal along with the Lt Governor of Delhi ……..appealed to the workers not to go back. Kejriwal made arrangements for accommodation for the migrants in the schools which in any case will remain closed till June 6. Kejriwal made arrangements to feed an increasing number of migrant labor. The problem was that Kejriwal had to cater not only to ghar wapasi of Delhi but also those from other states who flooded Delhi. Hostility from the BJP-ruled Haryana which is an enclave of great wealth in the national capital region made things worse. For those who were insistent on going back Kejriwal even oganized buses. Seeing the goodwill that Kejriwal and AAP were getting, other chief minister woke up. UP Chief Minister Yogi Adityanath postponed work on the construction of the Ram Temple and opened camps for the UP ghar wapasi. Including thousands of UP bhaiya who are the main newspaper vendors in the metropolitan of Mumbai. Not just at the retail level but even at the wholesale level. The entire distribution of the Express was handled by an UP bhaiya with a rustic office near the Crawford Market. During the Emergency it was the UP bhaiya who lent money to Ramnath Goenka to get over the cash flow problem.

It is clear that this spread of coronavirus has nothing to do with social distance. Even the heir apparent to the British throne Prince Charles and the Prime Minister of United Kingdom are under self-quarantine having tested positive for coronavirus infection. It is finally dawning on the powers that what is important is not social distance but physical distance. It does not matter whether the victim is a prince or a pauper. The chief minister of the state or his driver. What is critical is that if anyone has a bad cold and is sneezing continuously he or she should maintain a distance of at least a meter from his neighbor – be it at home or outdoors. Ideally, everyone should wear a mask.
Another big blunder on the part of the government is to confine families to their homes. Most families have small homes where it is difficult to maintain a one meter distance all the time. If there were no curfew the children would go to school, the parents to work and there would be no scope for spreading the coronavirus infection. The second mistake on the part of the government was to shut down all transport. This meant that the limited supplies of essentials which could be bought during the break if curfew time were not replenished. We Indians have never believed or respected queues. Try to persuade them to stand at a distance of one meter or more from each other at grocery shops is virtually impossible. As dramatized by the fact that police and that too the brutal insensitive CRPF had to be deployed to ensure that physical distance was maintained in public. The ban on transport of goods vehicles has been lifted which should relief the panic like situation which now prevails. The rich of course have no problems getting not only necessities but even luxuries. It is the poor who are suffering.

A LAST question which needs to be answered. Why did the government decide on a lockdown period of 21 days? This is because scientists believe that the coronavirus cannot survive, particular in a tropical climate for more than a week. It is also believed that 21 days is enough to find out and identify those from outside the country and state who may have contact with a coronavirus infected victim. It is possible that the Modi government is trying to sneakily implement the National Population Register as outsiders will automatically be identified as they will not be able stay as migrants with Goan families. That apart all the cases of coronavirus infection suspected so far in Goa are of Goans have had contact with victims outside the state. A majority of the suspects are shippies, relatives and friends of Goan shippies. For instance, the latest two suspects may have contracted the virus while they were working on a cruise liner in Bahamas. Since all public transport including airlines coming into Goa have been stopped it should be possible to isolate the potential coronavirus infection carriers during the lockdown period. Significantly, so far not a single one of the suspected victims tested positive are due to local transmission. Meaning transmission from locals to other locals who may have not left Goa or travelled out of Goa during the last one week.
By the end of next week no fresh cases of coronavirus will be identified. It can be assumed that Goa is a no risk state for the epidemic in India. The lockdown can be removed and all restrictions cancelled. We have no choice but to patiently wait it out till April 15. Beyond that the government has no business to torture Goans any further. We have a right to revolt once the epidemic phase is over!