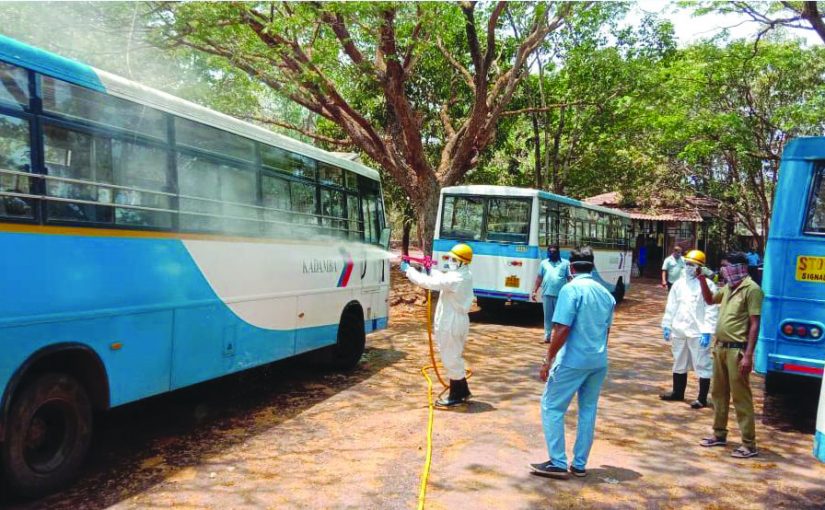 Public places and property are being thoroughly cleansed and disinfected in the wake of corononavirus lockdown. The much-needed sanitization and disinfection initiative is on a war footing after Chief Minister Pramod Sawant called a meeting with various public utility chiefs on March 31, 2020. Here you may see proactive efforts by Directorate of Fire & Emergency Services, Directorate of Panchayats, Directorate of Transport and other government utilities…all hopefully in a bid to urge the coronavirus to get lost.

IT appears that law students must engage in PILs to collect credits for their graduation! In the wake of Covid-19 pandemic there was a rush for the same and it was dismissed by the Bombay HC saying it was convinced the government is addressing all matters challenged.
The government is now addressing all concerns but the problem is the time it is taking do so! The PIL missed this important aspect. Why are ventilators being ordered so late in the coronavirus scare and lockdown? Obviously the people responsible are not abreast of the situation like they should be.
The PIL went into specifics which the petitioners themselves are not experts about, neither did they consult any. The PIL should have been restricted to asking whether the government has any guidelines and whether the same are followed or if there are gaps. This puts the onus on the government: Now they’ve got away on grounds of ignorance of petitioners!
And what about protection during aerosol generating procedures, namely respirators and their proper use and eye protection? What about the room and corridor ventilation which requires specific flow rates? At Bareilly the Fire Services hosed down scores of returning migrants with, hold your breath: chlorinated water. A State government official argued that this is permitted internationally. A Fire Brigade official said they used sodium hypochlorite which is used in swimming pools and is not harmful: Yet all the Fire Brigade personnel themselves were in full protection gear.
Clearly government officials have no guidelines to follow and “do their own thing.” We all know that people need only soap and water to wash hands and not chlorine! Next, this process only kills the virus on the body, not in the lungs! Sodium hypochorite is effective at only 5,000 ppm with ten minutes contact time — to be used carefully only on inanimate surfaces. Swimming pools have 0.1 ppm. Over 0.1ppm, hypochlorite is harmful to mucous membranes like eyes which need to be immediately washed in running water.
Vulnerable wage workers on the run need only to be provided with soap and water to bathe. Then provided with accommodation and educated about the importance of social distancing…but nobody seems to be educated about the guidelines.
The importance of guidelines and compliance is urgently required. Mahindra & Mahindra is awaiting approval for their Rs7,500 ventilators made to compete with the current Rs7 lakh ventilators. Pune Lab has developed test kits costing Rs1,500 as against the imported Rs4,500 ones. The government has to take decision in the interests of citizens and on information given by them and not do what they think should be done arbitrarily. If there are no guidelines from a competent Indian government then follow WHO guidelines!
— R Fernandes,Margao

CORONAVIRUS FACTS & FIGURES
A FEW calculation done on the spread of the novel corona virus globally have revealed a few facts that are pertinent to note:
The United States with 1,53,246 infected cases has a death toll of 2,575 which means 1 in every 59 infected has died indicating that though the infection rate is high, still due to good healthcare system the fatalities are lower among the highly infected countries. Also the United States, being a big country, temperatures are both high and low regionwise. Italy, which has the highest number of fatalities at 11,591 has the highest death rate with 1 in every 9 infected succumbing to the dreaded novel coronavirus.
Figures for the other major infected countries are as follows: The death rate for China is 1 in every 22 infected, in Spain 1 in every 11.6, in Iran 1 in every 14, in France 1 in every 14.6, in the UK 1 in every 16 and in Germany 1 in every 11.4. Among the European countries the lowest fatality rate is in Germany. This indicates that Germany’s healthcare system is the best in Europe. It may also be stressed here that European countries have lower population compared to Chinese and Iranian population. It is also likely that cases in China were not reported early and thus went out of control in initial stages. Iran with 41,169 infected cases has a good record considering the fact that it is heavily populated and fatality is 1 in 14 cases.
In the case of Europe low temperature plays a role and could have sustained the novel coronavirus longer, leading to more fatalities. All this is a stark reminder of the dangers of coronavirus, it may be noted that in Spain 13,000 healthcare workers have been infected. Also, globally the total number of infected cases has reached almost 1 lakh in the last 2 days with 7,000 deaths occurring.
— Stephen Dias, Dona Paula

CM’S EMPTY WORDS!
IF Chief Minister Pramod Sawant was so well familiar with Covid-19 what the hell was he doing for the last three months on this looming crisis? He was only obsessed by the inconsequential ZP elections. He could have planned an entire strategy to combat the deadly infection without allowing the state to drift into the panic mode we find ourselves in today.
Perhaps our CM should learn from Narendra Modi who said, “Good governance is not fire-fighting or crisis management. Instead of opting for ad-hoc solutions the need is to tackle the root cause of the problems.” Or even better, instead of praising his own tail, CM should take on board the wise words from Pope Francis, who stated ‘Every man or woman who has to take up the service of government must ask themselves two questions: Do I love my people to serve them better? Am I humble and do I listen to everybody, to diverse opinions, to choose the best path?’ Mr CM, if you don’t ask those questions your governance will not be good. Asking those questions is one thing, living up to them is quite another!
Our very honourable Satya Pal Malik has been the governor of Goa for five months. Not once has he said something good about CM Pramod Sawant. It implies that the governor does not exude confidence in the capability and integrity of the chief minister. So if the Governor does not have faith in the honesty, uprightness and ability of the chief minister why should a common man like you and me?
— Aires Rodrigues, Ribandar

ADVICE TO MEDICOS
Doctors, ENT and other surgeons, physicians, ER specialists are especially prone 10 times more than general public to corona infection due to high virus load. Doctors who get corona positive have a 10 to 12% risk of mortality. This is due to a higher virus load in exposed doctors, which leads to cytokine storm. General public is usually-infected through fomites (infected surfaces), which has a lower virus load, hence a mortality of about 2-3%.
But surgeons and anaesthetists are at high risk as are cardiologists, critical care specialists and pulmonologists. While critical care physicians are now in full PPE in most of the centres, they are better protected. Cardiologists, ophthalmologists, surgeons and anaesthetists get exposed to asymptomatic patients or patients with atypical presentation. Hence they run the risk of becoming sitting ducks. Take care well.
— Dr Ajay Netalkar, Panaji (as shared over Facebook)