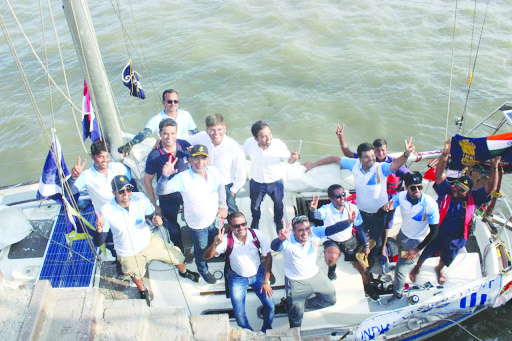 LONELY: The two Goan sailors who were quarantined twice on the suspicion that they were infected with coronavirus!

On Sunday, Goa announced that all of the seven people, who had tested positive in the state, had recovered. Six of them, having tested negative twice, are now at a resort, waiting to complete the official 14-day buffer isolation cycle before they go home. Theirs was an encounter with fear, panic and stigma, but also hope and care. Six of them have given their consent to offer their blood for convalescent plasma therapy if needed. The Indian Express spoke to two recovered survivors, both seafarers, who recount their days of being COVID-19 positive.

ON March 30, the Directorate of Health Services (DHS), Panaji, put out a circular asking passengers of flight UK861 of Vistara Airlines, which travelled from Mumbai to Goa on March 22, to report to a helpline. A passenger on this flight, who had returned from New York, had tested positive.
For the 37-year-old, this was the beginning of a long journey. In New York, he says he followed all instructions — in the cruise liner he was employed in, at the airport, and while in his cabin seat in the last row. “I knew I had to protect myself. I ensured I didn’t touch any surfaces without reason,” he recalls.
Having travelled from New York with caution, things went for a toss at the Chhatrapati Shivaji International Airport. “The moment we arrived, there was no social distancing. It was like going to buy fish in the jostle and hustle of a market.”
Later, he would tell officials in Goa, that this is where he might have contracted the infection. “Even the trays they were giving us to keep our things in were handled by a crowd, with nothing sanitised,” he recalls. He went through the queue for the infra-red thermal gun testing. His temperature was normal.
Survivor A called home after he reached the domestic flight terminal, before taking off for Goa. “I told my wife to ensure that she and my parents make arrangements for my isolation in one room. Then I asked them to ensure they keep Dettol and hot water ready.”
Hours later, he reached home. He left his luggage in the garage and entered through the back door. “I walked straight to the toilet they had assigned as my bathroom for 14 days. I used the hot water to shower and then soaked my clothes in the Dettol water. These were the instructions,” he says.
What followed next was the “ship drill” he was trained in. “On ships and cruise liners, we follow US public health norms and guidelines of the Centre for Disease Control and Prevention. These are confined spaces, and we are always very vigilant for the norovirus (a contagious bug that causes nausea and diarhoea). We are trained to keep swiping surfaces, especially washrooms and eating areas, with sanitisers several times through the day. I extended my training into my isolation at home,” he says.
He then did his first long video chat with his parents and wife, who were in the adjoining room. “It was emotional. I was returning after eight months and they were worried. I had to calm them down and explain the isolation procedures that everyone from abroad had to adopt,” he says.
Soon, the drill was perfected. His food and drink was left in the plate and mug that he kept with him, and washed himself. Visits to the bathroom were announced, with all family members first locking themselves in their rooms when he walked out. “I would keep my hands inside my pockets and be conscious not to touch any walls on the way. I would sanitise every inch I touched by washing it with Dettol and Lizol,” he adds. “Everybody has to be responsible. It’s how seriously you take these precautions that will decide your and your loved ones’ future. Only you can save your family.” (No one in his family has reported any symptoms so far. All tested negative.)
Two days later, he ran a fever (98 degrees Fahrenheit). By night, when the fever crossed 102, an ambulance rushed him to the Goa Medical College. On March 29, he tested positive and was sent to the designated COVID-19 hospital at Margao, south Goa. “I thought I was prepared. But I went into a state of shock when the test results came,” he recalls.

Despite testing positive, he remained largely asymptomatic — the fever subsided in a day and did not return till the date of discharge. At the Covid hospital, where he shared a room with three other COVID-19 patients, he slipped into panic and fear, from all that he read on social media. “I started to think, ‘How will I die?’ ‘Will my death be violent will I go peacefully?’”
In all that paranoia, he looked forward most to the doctors and nurses’ visit. “The nurses and doctors would treat us like their own. I would wait for Dr Edwin Gomes [who leads the team at the ESI hospital] to walk in and talk to me. That little human touch felt the most important. We are born and brought up to be social. That is how we connect. Being abandoned and secluded breaks you. It’s not the virus, it’s the lack of human touch, the lack of that social cover that breaks you,” he recalls.
Then one day, he started talking to himself. “I asked myself, ‘How can a normal healthy person die?’ I started trusting myself and my body,” he adds. He began reading up on the phone. “I found 83 per cent actually do not die of the virus,” he says. Conversations with the doctors and the stories of survivors, which he sought out, calmed him.
On Good Friday, the first test turned negative. On Easter, Dr Gomes walked in in his PPE attire. “But he had removed his headgear and was only wearing a mask. We knew then that the second test too had come negative. We had crossed over to life,” he recalls.
Survivor A, like all the six recovered patients, have consented to have their blood used for convalescent plasma therapy, if needed. “This ostracism of COVID-19 patients has to stop. We have been treated like untouchables. In social media, we have been called ‘terrorists bringing evil from outside’. In the long run, in the absence of a vaccine, god forbid if you get the disease, then we will come forward to save you. We have only life to offer now,” he said.

He reached Goa on March 23, after taking three flights; San Diego to San Francisco, then to Goa via New Delhi. Survivor B says he flew back on his own cost, when he understood that a lockdown was imminent. His connecting flights in the US followed social distancing norms, with two seats left empty between passengers. There were other strict guidelines, too.
“Every instruction I followed was forgotten at New Delhi airport, where we were 11,000 people on the floor, waiting to clear immigration. We were divided into groups of 10 and no social distancing was followed. We finally faced an immigration officer 18 hours after we landed,” he says. “I am sure I caught the infection in those desperate hours.” He missed his connecting flight and had to take an Air India flight — which the Goa health department later announced as a flagged flight after he turned positive.
Like Survivor A, he, too, reached the airport and called his wife and asked her to leave and go to her in-laws. “It was too much of a risk as she is pregnant,” he recalls. He remained home, practising the sanitary instructions followed in ships. Fatigue was the first sign in his case, and then on the night of March 26, his temperature touched 103 degree. “I called the helpline and an ambulance was sent,” he recalls. With his temperature dropping to normal, he was asked to isolate at home after a day’s treatment at the hospital, but asked to come for testing. His first test was negative, but the second was positive.
“Nothing prepares you for that moment,” he recalls. He was the third patient to enter ESI hospital, the state designated COVID-19 hospital. “They welcome you like family. The nurses and doctors do not treat you like patients,” he adds. Largely asymptomatic, he was put on antibiotics, with efforts to improve his immunity. “But the bigger medicine was the comfort the nurses and the doctors give you. They do not let you fall,” he says.
He recalls spending an emotional Good Friday in the ward. “Our beds are arranged in the corner, in a cubicle style. The nursing staff is always behind a glass partition. At first, it was just us four singing the Chaplet of the Divine Mercy. Four patients with all our faith, and our desire to heal. Soon, we saw something beautiful. The entire nursing staff could be seen, standing together, in their PPE outfits behind the glass door and singing Divine Mercy. They were praying for us. It broke us down,” he says.
The 32-year-old sailor had a kidney operation a decade ago years ago, and was worried about the virus’s effect. “I could feel something pressing against my kidney. The virus is like a thief. He looks for that open window, that weakness in you. In the end it is not the virus, but the fear that kills,” he says.
Four of them tested negative twice, on Good Friday, and then on Easter. “The doctors are God to us. They cannot be everywhere. As survivors, we can now spread their words. We can tell you to reach out for help as soon as you see any symptoms. Do not fear. Only a quick response can save you.”
The only moment he now awaits is to hold his baby. “My wife is expecting. It’s any day now. I am in isolation for 14 days. My prayers are on.”