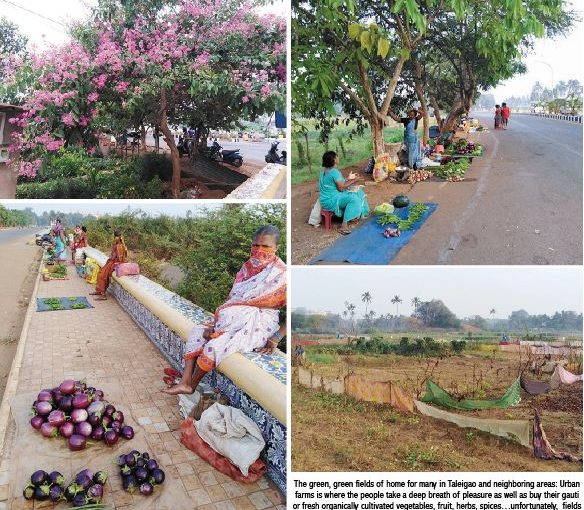 The green, green fields of home for many in Taleigao and neighboring areas: Urban farms is where the people take a deep breath of pleasure as well as buy their gauti or fresh organically cultivated vegetables, fruit, herbs, spices…unfortunately, fields are giving way to mindless constructions, taking away small livelihoods. During the Covid-19 lockdowns it is these small local farmers who came to the rescue of citizens!

Urban farming plays a vital role in keeping people happy and healthy, but the small farmers are constantly threatened by development of the concrete kind…

THE last open farmlands of Taleigao are going, going, and will soon be gone with the wind if nobody saves them on a permanent basis now! Capital city Panaji and neighboring Big Brother Taleigao (pretending to be a private fiefdom) continues to suffer from a perennial, mindless real estate boom. Anyone gives a damn about how the quality of life of the people living in the vicinity continues to deteriorate from good to bad and worse? Who realizes this? Not local MLAS or powerbrokers or builders or even residents from the sound of it.
The last bit is not quite true for recently a group of farmers came together to vent off anger against the takeover of yet another plot of farmland for the construction of a Taleigao Panchayat building – the Lord along knows how many Panchayat buildings are needed by the people of Taleigao or their leaders!
About seven farmers in the area led by advocate Albertina Almeida who has her own farm in the area protested against the takeover although apparently the takeover was glossed over as a legal tender deal with farmers who could not farm their land and all the papers were squeaky clean. Not so, says Albertina Almeida, there is no transparency in the manner in which the farm land has been taken over for development into another so called public construction. The group of farmers say everything should be over the table and not under the table and where are the documents for anyone to see?
Why the jhatpat takeover just as the monsoon broke and the small farming community here was getting set for sowing for another monsoon season? The real story is not coming out or rather is being suppressed and the protesting farmers were rudely dragged and bundled into a police bus for filing a case against them for disturbing public peace or some such thing – for protesting peacefully against a questionable takeover of the farm plot which adjoins the new Taleigao Panchayat property or so called Taleigao Community Building. Constructions developed on erstwhile farmland do affect neighboring farmland which continue to be tilled (albeit an uphill task with new problems cropping up forever, least of all the problem of finding enough young labor to work the farm to yield rewarding results once farmed with love and affection). Pathetic retrogressive constructions do more than just screw up the drainage system of farmland, there is also the matter of creation of more garbage and litter with more people in residence cheek-by-jowl.
Goa is an educated state but few of the modern generation youth make the connections between land buildup and deteriorating quality of air, earth, water and skyline around them, or the open spaces where only farmlands and trees make a difference for the better quality of life! Farms no matter how small are the living, breathing lungs of any urban setting and seriously define the quality of life of the people who live there including the local politicians and their cabal of land developers (in Taleigao it is the same old familiar bunch of builders in search of soft low-lying agricultural land to build their monstrous building projects).
Needless to say this kind of ad hoc urban development only compromises on everybody’s quality of life. Is it any surprise that a host of degenerative lifestyle ailments and diseases (not to mention cardiovascular problems and cancer) flourish in these claustrophobic vertical slum scapes – of what worth is urban living then?
Especially if one is an urban resident one must care about any open field, farm, garden, park, natural water body, which is illegally or even half-illegally taken over by developers in league with high-flying politicians or the government of the day. Why don’t we as a people realize the importance of whatever is left of the green, green fields of any unending urban boom? There are any number of politicians in league with builders to manipulate official papers, break through legality, to grab farmland for some more concrete real estate ownership?

Funny or not funny. Most everybody wants to own a building or one more building ad infinitum but not a pristine field tilled by those who love the land which if treated right offers up rice, vegetables, fruit – some today call it green organic gold! And to think Taleigao was once the envied granary of the area for folk near and far. From the sound of it the Taleigao Panchayat is at it again – it’s back to eying the last farmlands of the people of old farming these fields for generations, for more concretization.
What happened or is still happening is deplorable if it is true and even if it is not true — out of concern for the larger issue of protecting open farmlands in an urban milieu. Farms are not idle lands waiting for further predatory real estate development without rhyme or reason as many who live high and mighty lifestyles think.
Keep in mind that during these coronavirus pandemic lockdowns if there is one thing which has emerged as a blessing for the small farmers around Panaji, Taleigao, Carazalen, it is the open landscapes or farms — suddenly, as vegetables from distant Belgaum stopped coming into Goa because of a stop to transportation, so what? Goan farmers and farming societies right here were there down tree-lined roads and street corners with their fresh “gauti” produce of a host of local vegetables, eggs, fruit and what not and what not. It all came in useful at home to feed family and even friends.
If you’re asking me it is the small farms and hardworking farmers of Taleigao who more than anything else saved the day for Ponjekars under the recent successive Covid19 lockdowns! We would be far, far worse off without these local farms in the neighborhood routinely in the early morning and evening offering the famous ladies finger of Goa, piles of cluster beans (chidki midki), aubergines purple and green, bottle gourd, pumpkin, drumsticks, a slew of leafy greens, not to forget cucumbers, coconuts, mangoes, pineapple, bananas galore. Forget the fact that the farming landscapes in town or city offer the best walks for fitness folk and the elderly seeking some fresh air and returning home with a bunch of crisp leafy green tender white radish or mulo! To turn into a salad or a sabzi for the day’s meal.

One cannot praise enough the goodness of organic farm produce as against the produce farmed chemically for shelf life in further away places as in Karnataka. Even the ginger from Karnataka farms engaged in chemical farming and selling in Goa at fancy prices is full of fungal residues! Who wants to buy it! Check out ginger cultivated organically or for that matter anything cultivated organically…it is no longer news that what we put into our mouth has a bearing or what we suffer from.
Yet we are gluttons for suffering if we don’t respect and protect our urban farming lands. If you’re asking me every urban farm is sacrosanct and every urban farmer should have guaranteed right of land and livelihood regardless of who the landlord, tenant or migrant worker. Shame on those who do not see the picture of living sustainable lifestyles in harmony with whatever Mother Earth is around us. We will always be cursed and never blessed if we do not adhere to the larger good of a people anywhere.
To do the right thing may be difficult for some but unless you do the right thing you will never reap happiness and the good health which goes along with it. And we have no one to blame but ourselves as some time goes by and in this case, Taleigao — as generations of Taleigao gaunkars and communidade old-timers knew it, but which is varnishing today to be replaced by yet another unhealthy concrete slum suburb or honky tonky township.