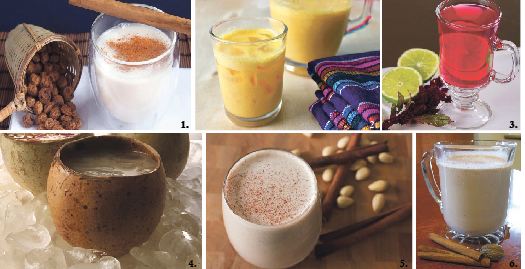 HERE’s a recipe for orchata which I rather like. It’s described as an Indian almond and rose water drink though and considered one of Goa heat-beating cold drinks for children! Writes Maria Teresa Nenezes’ in her Goan cookbook and memoir “The Essential Goa Cookbook,” the drink was offered at her sister’s wedding party in 1935, when “Trays of wine, liquors, the special xaropes, or syrups, of Goa…We children concentrated on orchata, and of course, sampled every tray that passed us!”’

(Yields or makes four and quarter cups,
time taken 40 minutes)
Ingredients: Ice; 2 cups or 12 oz raw almonds; one-third cup sugar; half tsp rose water.
Instructions on how to make: Set a large bowl of ice water by the sink. Bring a medium pot of water to rapid boil. Stir in the almonds and let them cook for ten to 15 seconds. Drain and plunge into ice water to cool and loosen skins, rub skins off between hands and discard almond skins. Transfer almonds to a blender and blend with one and half cups of ice water at high speed till you get a smooth consistency. Line a fine mesh stringer with double cheesecloth and strain our almond milk as much as possible. Repeat process with any remaining almond pulp, thrice if you wish. Refrigerate almond milk and make rose syrup.
To make rose syrup bring two thirds cups of water with the sugar to a boil, simmering till you get a reduced syrup. Remove from heat and stir in the rose water. Transfer to a heat-resistant bowl and refrigerate. At time of serving you may pour out almond milk, sweeten with rose syrup to taste, serve over ice if desirable. Enjoy.
Note: You may also of course make a sweet almonds concentrate or orchata concentrate for more practical use, but that’s another recipe done differently.