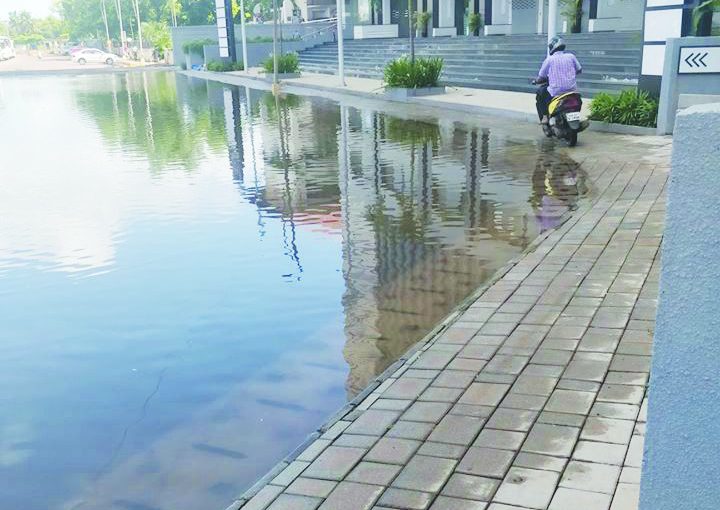 MONSOON RAIN… And Panjim’s business district at Patto gets submerged below water for want of drainage planning. This was the scene outside Central Library last week after a few days of serious rain. Clearly our town planners and developers haven’t a clue about high tides and developing urban landscape on low lying agricultural land!

THE government is arbitrarily forcing the citizens of India to link the Permanent Account Number (PAN) to the Aadhaar card. The Supreme Court has clearly passed a verdict that only those who are applying for social welfare schemes should link their Aadhaar. The government has also arbitrarily coerced citizens to link PAN and Aadhaar for filing income tax returns.
The Supreme Court should rap the government for non-compliance of its verdict. Also, it may be stressed that the SC has clearly stated that for opening and maintaining bank accounts, Aadhaar card linking is not mandatory.
Why is it then that the banks are not de-linking Aadhaar card details of account holders as per the SC verdict? The Aadhaar card has sensitive biometrics such as finger print and iris scan which are personal attributes of an individual not meant for linking and sharing.
Also banks are supposed to work up a profit on deposits of account holders and it is the duty of all banks to work up profitability, so they are not rendering help to account holders who on the contrary are now getting a pittance of interest rate. Bank management is also supposed to control high NPAs by judicious lending!
— Elvidio Miranda, Panaji

FINANCIAL STRAITS
IN this current raging COVID-19 crisis which has now extended well into 2020 and the end of which nobody knows, the Goa government should have displayed some sensitivity and concern, more in particular to the poor and impoverished who have been financially, emotionally and physically drained over the last over three months.
With the rising fuel rates, escalating prices of essential commodities, the growing taxes at all levels while even the power and water supply bills being unreasonably hiked, all this comes as a big jolt to the people suffering from financial straits.
Let us all appeal to the conscience if any of this government which seems to be so very numb, to wake up to the reality and have a ground feel of what the common man on the streets of Goa is facing.We elect MLAs to serve us and not to abandon us, especially during such a pandemic, when their role is all the more crucial. Goa’s 40 MLAs will be judged not by what they have done, but by where they have failed in reaching out to the needs of our poorest of poor who are now so distressed and stranded monetarily in this crisis which admittedly has brought the entire world on its knees.
Having lost our faith on the elected representatives, to our misfortune even mosques, temples, churches are today shut, denying us an avenue to seek the Almighty’s intervention in these turbulent and trying times. God Save Us.
— Aires Rodrigues, Ribandar

WHAT BIRTHRIGHT!
THE singular most characteristic of Indians is their belief that “everything is my birthright!” He may be a Johnny come lately having contributed absolutely nothing to society or country but will claim his birthright. With rising Covid-19 positive cases villagers are going into lockdown out of fear. Loss of income is secondary as it must be.
In such a scenario we see TTAG calling for tourism restart! With their claim of 40%GDP i.e. Rs30,000 crore, it is unacceptable that the profiteers and their workers cannot sustain even three months of closure! This is total mismanagement and calls for replacement of unorganised tourism business. Even our sales attendants in shops earning a paltry Rs7,000 pm did not whimper about the lockdowns!
TTAG has no value addition to the business. With 80 lakh tourists all they do is provide bed and breakfast. The beaches, festivals, sleepless nights due to loud music, even the marketing of fairs has robbed locals and the government. It appears that here too they believe tourism is their birthright. No responsibility. Attractions like prostitution, drugs, and whatever increases footfall are welcomed and condoned by them.
Mind you, they want to follow SOP’s that are “practical!” Should not SOP’s be to stop the spread of the coronavirus at any cost? Why do they not come out with their SOP’s? We need a closer look at their souls. They are quite sure they can get the government to come up with practical SOP’s that look good on paper.
Question: If a tourist comes with a disposable mask, what is the SOP they will follow? We never stop seeing broken glass bottles on beaches and hotel garbage disposed in neighbouring villages: So now we will see masks too? What is the solution?
Other countries follow sustainable tourism. Tourists are told to carry back their plastics. Not so Goa. Not practical, right? We need to sanitise the tourism industry in Goa first.
— R Fernandes, Margao