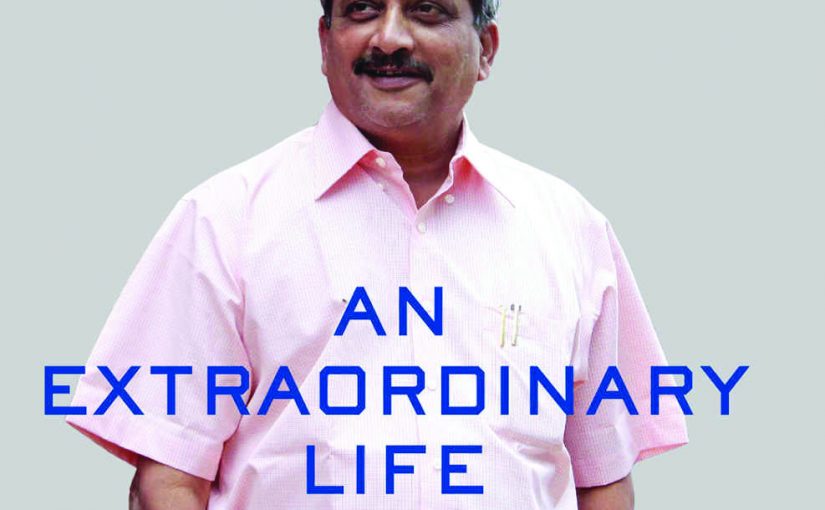 GOODNESS me! Go read ‘An Extraordinary Life, A biography of Manohar Parrikar’ written by journalists Sadguru Patil and Mayabhushan Nagvenkar. I actually enjoyed reading the only readable biography of Goa’s most controversial chief minister Manohar Parrikar, now no more. He is all there larger than life in what I consider the only close to the truth biography of Goa’s only IITian chief minister… the story of an RSS-reared young man who was maneuvered into holding positions of power first as chief minister of Goa for four terms and somewhere there a short stint as Defense Minister of India.
Most biographies of this nature are purely PRgiri reading but not this one although one gets little of the personal story of Manohar Parrikar – he was by and large a public man and politician. And yes, he didn’t like anyone just dropping by at his residence to say hello to him or give him presents….if anyone took that liberty they left with an earful of scolding ringing in their ears!
Most commissioned and even not commissioned biographies are usually merely biographical detailing with a lot of mundane, boring nitty gritty between all that! Biographies of politicians may or may not be easy to write otherwise. This biography is purely a labor of some amount of sound journalistic instinct as also awe and the idea was to write a fairly honest biography of a chief minister who is said to have changed the way mainstream India looked at Goa and the political goings-on in the country’s smallest state.
Authors Sadguru Patil is a familiar Goan mediaman having worked for various Marathi newspapers since 1995, he has interviewed Manohar Parrikar on at least 20 occasions and was certainly on more than nodding terms with the mercurial chief minister (somewhere in the book is revealed that the CM was more approachable during the first half of the day, but press conferences in the second half were more difficult for he was more scathing to media people then, something credited to diabetic irritability). As for the other half of the authors’s team, Mayabhushan Nagvenkar too is a familiar media person recognized for his irreverent sense of humor, he works for various newspapers and news services.
The biography faithfully traces the rise and valiant end of a politician who took his politics seriously even if in latter day turn of events he was oftentimes described as the “U-turn chief minister” who contradicted himself constantly – naturally an out of power Manohar Parrikar was more agreeable than in power Manohar Parrikar and then at the height of his power as Defense Minister of India, with the accompanying graft scams and differences of opinion breaking out in electronic and print media.
The biography paints Dr Jykll and Dr Hyde portraits of Parrikar, human too, imperial too, vindictive too to those who didn’t fall in line into the BJP political net of righting historical wrongs, big doses of healing majoritarian grievances. Needless to say much of the biography unfolds through the eyes of Manohar Parrikar’s relatives, friends, foes, bureacrats and IIT contemporaries who recount some of what he loved and some of what he hated on his way up the political ladder.
It is the story of the rise of a son of a grocery store owner to an RSS sanghchalak in Mapusa town, to proud IITian metallurgical engineer with a yen for bridges, personal tragedy, and groomed by RSS stalwarts to push BJP politics further in the state as Opposition MLA, eventually an extraordinary chief minister of Goa and defense minister of India.
One may say as the lives of chief ministers go Manohar Parrikar lived quite a masala-filled life and times, although some intimate details we may never get to read about. All in all here is an intriguing political biography worth reading if you’re interested in understanding one of Goa’s memorable as well as elusive chief ministers! Indian politicians would do well to read this biography to learn a few good lessons!

Excerpted from
‘An Extraordinary Life,
A Biography of Manohar Parrikar’ by Sadguru Patil and Mayabhushan Nagvenkar….

One of Parrikar’s most blatant attempts to muzzle the media came in 2003.
Parrikar was then in the middle of a running feud with the then leader of Opposition, Luizinho Faleiro, over nepotism and corruption in the Economic Development Corporation. The to and fro between the two big guns was being reported in most newspapers, when t in the middle of the confrontation, a legal notice was dropped on the desks of five largest-selling newspapers, namely the Navhind Times, oHeraldo, Tarun Bharat and two newspapers run by the Gomantak Group (now owned by the Sakal Media Group). The notice warned the newspapers against writing defamatory content.
My client does reiterate that being a public figure, it is necessary for him to accept criticism even if it be fair or uncalled for. However, under no circumstances, can a person’s reputation, character, integrity be made the issue for judgment through newspaper publications by making false statements and publishing them,’ the notice said. It was drafted by a rising star in the BJP, advocate Narendra Sawaikar, who later became a Member of Parliament from south Goa. The notice shocked the media establishment and created outrage in civil society. Parrikar doesn’t have democracy flowing in his veins. (The former colonial dictator Antonio Oliveira) Salazar need not live in Portugal alone. He can also come up in India,’ former editor and ex-MLA Uday Bhembre blasted the chief minister’s RSS mindset’ in Hoot. Further, the Hoot also said: Parrikar, who has earlier too faced accusations of trying to somehow control the press here, is also known to be oversensitive to criticism. This is, in part a fallout of the excessively good press he got since taking over power late in the year 2000. His earlier Mr Clean’ image has also possible made him react negatively to adverse publicity. But this time, he just might have overplayed his hand. This, combined with the signs that the honeymoon period’ with his government is wearing thin, could lead the Opposition to make the most of acivil liberties’ issue that the chief minister himself gifted to them.’
Parrikar’s increasing irritation with the media was only a symptom of his trademark arrogance and inability to handle criticism.
The notices lapsed after a stipulated period of time, but the scar they had seared on Parrikar’s relationship with the local media never really healed.
Parrikar’s blow-hot-blow-cold relationship with the media grew more incensed after his party came to power with a simple majority in the 2012 state assembly elections for the first time in the state’s history. Confident with the superior legislative arithmetic, Parrikar’s contempt for the media fraternity grew by leaps and bounds.