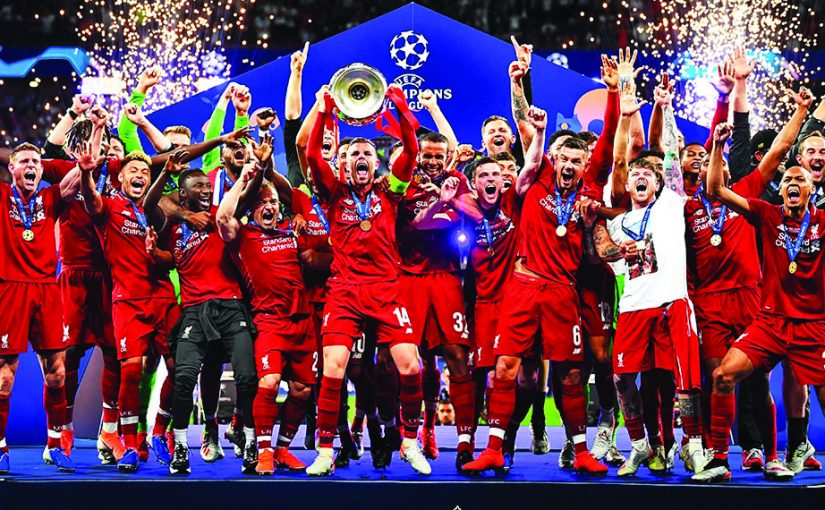 OVERJOYED: Liverpool playing right through Covid-19 and the lockdowns won the English Football League title after a gap of 30 years. This led to a great celebration when all the rules about maintaining social distancing were forgotten!

Traditionally, bowlers in cricket matches use saliva from their mouth to give a shine to the cricket ball which becomes dull after prolonged use. This is particularly true in test matches. Similarly, in many games Covid-19 has forced sports administrators to bring about changes. The biggest controversy at present is whether the Paris St Germaine should have avoided the European League Trophy based on its performance till the lockdown was imposed.

Sports activities worldwide have started crawling back after the deadly Covid-19 put them to a grinding halt. Liverpool have won the English Premier League title after 30 years, while Bayern Munich have proved they are Bundesliga kings after they added another league title this season. Cristiano Ronaldo’s Juventus are putting themselves in contention for the Serie A title while CR 7’s former club Real Madrid are giving a tough fight to their rivals Barcelona for the La Liga title. The top tier Big Five of Europe – England, Germany, Spain, Italy and France – steal the limelight of the European Leagues which comprise 36 professional football leagues representing more than 950 clubs in 29 countries across Europe.
Coming closer, India’s popular Indian Soccer League (ISL), which has put the Indian League (IL) in its shadows, is giving the All India Football Federation a trying time to amalgamate both the competitions. With some clubs refusing to fuse together because of financial restrictions, it might take another two or three years for India’s football governing body to unify the contest.

NEW GOA LEAGUES SOON
Closer home, the Goa Football Association (GFA) under a new committee headed by Goa’s former CM Churchill Alemao, is reportedly trying to get the State’s various leagues kick off at the earliest. However, Goa, which was declared a Green Zone a month ago, is witnessing an increase of Coronavirus cases with some areas even being declared containment zones. This might even push further the start of the leagues in the State.
Churchill Brothers is the only Goan team still contesting in the IL, while Dempo SC, Salgaocar, Sporting Clube de Goa had withdrawn after AIFF’s decision to restructure the domestic league system. The Goan clubs had then taken a united stand to oppose the proposed restructuring that would make ISL a top tier league and relegate the I-League to the second division.
Returning to the start of the sports activities, specially football, the GFA has sent a letter to all its affiliated clubs that due to the lockdown from March 23, 2020, and in view with the govt letter issued on June 20, 2020 on “Restrictions on Meetings and Gatherings” it has not been possible to have meetings of the Executive Committee.
GFA President Churchill Alemao has assured the clubs that “several important decisions” will be taken once the situation improves in the State.
However, some clubs on the condition of anonymity, have said that executive meetings could have been organized by holding webinars or meet keeping safe distance. The AGM of GFA is normally held on the last Sunday of July. “Will the GFA avoid holding the AGM on the pretext of the restrictions imposed by the Goa Govt?,” a club president wondered.
“The responsibility rests with the Goa Football Association on how they wish to begin the leagues for the new season and wherever necessary, to complete the unfinished leagues of the previous season,” said the former GFA president Elvis Gomes.
The incumbent GFA president, Churchill Alemao, however, said. “The final call will be taken by the football governing body in India, depending on the guidelines of the government.”
The AIFF, however, has already announced (see box) that the coming season would be played between August 1, 2020 and May 31, 2021.
GFA, in its latest letter to the clubs has already said that the GFA’s 2019-2020 has ended. (see GFA box).
“If the 2019-20 season has ended, why has the GFA not declared the champions in the different leagues,” another official from a Pro-League club wondered.
He cited the example of the French Ligue where Paris Saint Germain (PSG) were declared champions when the league was frozen due to the Coronavirus. Second-placed Marseille and third-place Stade Rennais finished in the Champions League positions while Lille, Stade de Reims and Nice qualified for the Europa League.
When football activities came to a halt due to the pandemic, some of the lower divisions’ league playoffs had been completed while one or two matches of the Pro-league were yet to be played with Sporting Clube de Goa leading the group.
A former member of GFA suggested that the governing body could keep the status of the clubs at the end of the season with no promotions/demotions and ratify it by holding an Executive Committee meeting before the AGM in July 2020.
The Central govt has recommended that no ‘contact sports’ can be started and has advised the State and Union Territories to sort out the issue given the ‘load of the virus’ on individuals.
Some of the clubs have already commenced their preparations for the next season by asking their players to have fitness activities on their own.

SALGAOCAR COACHING
Anthony, the coach of Salgaocar SC, said that he sends the individual weekly fitness programme to his players by WhatsApp in preparation for the coming season.
“We began this programme on June 11, 2020. I monitor their fitness regularly by either paying them regular visits or checking their progress online,” said Anthony.
“By the time we start regular practice, we can begin directly with the technical programme since the players have already undergone the fitness exercises individually,” Anthony added.
Directors and coaches of other clubs have also voiced similar ways of preparing for the next season, although they have doubts whether the season will actually start given the increasing cases Coronavirus in the State.
The former GFA president Gomes said that, “By now the GFA should have placed before the state government its own proposal in the form of an action plan about how it wishes to conduct its matches within safeguards required to be adopted.”
That plan, Gomes said, ought to have been prepared by taking inputs from all the participating clubs and ascertaining their preparedness levels in the present circumstances, the key factor being safety of players’ and officials.
“For that, testing of every player for Covid-19 and regular monitoring of health of each player and official would be needed to be incorporated in the plan. The government could then have evaluated the plan and suggested changes if any, so that matches could begin. Of course it goes without saying that until the government allows, matches will have to be played without presence of spectators,” Gomes opined.

NEW FOOTBALL SEASON
While Goans are eagerly looking forward to the new football season, some of the village clubs which used to organize tournaments in the monsoons, are hoping and praying that the menace of the COVID-19 is marginally reduced instead of the present situation seen in the State.
One cannot take football from Goans, it is rooted in their blood. This prompted the late former CM Manohar Parrikar to make football the official sports of Goa. We may not see official matches being held in the stadiums, but if one goes around in the villages, one can see youngsters crowding their small fields. This, only after the police have made their final checking rounds.