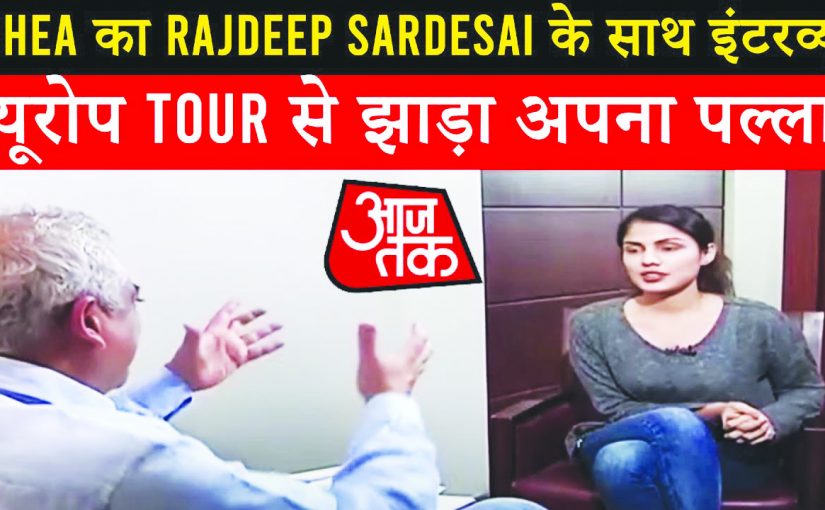 WAR: Media wars broke out between Republic channel and the rest of the media over the shrill continues coverage of the Rajput suicide case by Arnab Goswami.

Both electronic and print media have been extremely critical over the rigging of Television Rating Points by the Republic TV channels. It may be recall that Rajdeep Sardesai of NDTV was savagely attacked for interviewing Rhea Chokraborty to get her side of the story in the best newspaper tradition…..

While some channels called for Arnab Goswami’s arrest, others said the issue is part of a deeper political problem.
The nation wants to know what exactly the Republic TV-TRP rigging controversy is.
News channels on Thursday evening had several answers:a“scam”,“scandal”, “dhokha”,“cheating”, “saazish”,“fraud”,“vishwaasghaat”, “racket”, “chori”.
Between 4pm and 10pm, television news was a roulette of these weighty words as news breaker Arnab Goswami (not for the first time) became the news maker.
The Mumbai Police on Thursday, 8 October, addressed a press conference, claiming that it has busted a “TRP scam”, whereby Television Rating Points (TRPs) were being rigged.
The conference, led by Commissioner of Mumbai Police, Param Bir Singh, named Republic TV and two other Marathi channels who it said were involved in the malpractice. Four people have been arrested in connection with the matter and Republic TV’s editor-in-chief Arnab Goswami is also likely to be summoned.
Not surprisingly, the alleged scam was the focus of every primetime news debate on television. Among the major themes that emerged from the primetime debates were:
• Republic TV has affected the credibility of other news channels.
• This is not just about TRPs but goes deeper and wider.
• The police’s claims deserve a thorough investigation.
• The issue of TRP manipulation has touched a raw nerve among news channels.
The Quint sat through news debates across all major television channels on Thursday evening to decode and dissect how the controversy, pertaining to the news media itself and involving one of the most polarising individuals on television, played out.

ABP NEWS (5pm)
“Republic TV ki TRP saazish ki poll khuli” (Republic TV’s TRP conspiracy unmasked) read the channel’s top band.
First off, the blocks was ABP News’ Rubika Liyaquat. The central theme of her debate was one that was later echoed across most news shows – Republic TV is giving other news channels and journalists a bad name.
As developments related to the alleged TRP rigging kept trickling in, Liyaquat made an impassioned case with her panelists, including senior journalist Dibang, that Republic TV “has sidelined every principle of journalism” and “today it was finally clear who the real villain is.”
Dibang confirmed that murmurs of TRP manipulation have been around for years.

AAJ TAK (6pm)
“Republic TV TRP Chor Hai!” (Republic TV is a TRP thief)
Aaj Tak’s popular show ‘Halla Bol’, hosted by Anjana Om Kashyap, was far more direct and confrontational. This was made clear by the name of the Thursday’s episode mentioned above.
Unlike ABP News, Aaj Tak had a reporter outside Republic TV’s office in Mumbai and another outside Arnab’s residence. While the correspondents echoed Liyaquat’s points about facing a crisis of credibility because of Republic TV’s agenda driven and irresponsible journalism, Kashyap appeared to be in no mood to play it down.
Kashyap’s primary arguments revolved around how Republic TV has cheated the nation and now stood exposed as slugs on the channel read “Farzi TRP wala channel benaqaab” (The channel with fake TRPs unmasked) and “Republic ka Bharat se Dhokha” (Republic cheats Bharat).
Republic Bharat and Aaj Tak have been locked in a bitter TRP battle, and among the other points that Kashyap drove home was the distinction between Republic’s “propaganda ki patrakaarita” (propaganda journalism) and their fact-driven reporting.

NDTV (8pm & 9pm)
“Beginning of the end for hate-for-profit media?”
NDTV ran two back-to-back shows focusing on the TRP controversy and Republic TV, with slugs like the one mentioned above.
While Sreenivasan Jain conducted a discussion on it at 9 pm, Sanket Upadhyay held a one-hour special on the “#RatingsScam”, with guests ranging from senior journalists N Ram and Kumar Ketkar to former Prasar Bharati CEO Jawhar Sircar, Congress leader Abhishek Manu Singhvi and analyst Geeta Bhat.
NDTV had the most serious and in-depth debate among channels on not just the problem of TRP system but also on wider political, economic and social dimensions of manipulation through television news.
However, perhaps, driven by the proximity of the topic to its own field, NDTV’s uncharacteristically direct slugs read “TRP for Sale” and “Accused of cheating, now invoking ‘SanatanDharm’”.

TIMES NOW (8pm & 9pm)
“Republic TV Cheated Bharat”
While Rahul Shivshankar’s 8 pm show accused Goswami of cheating the country, Navika Kumar’s 9 pm primetime called it a straight up scam.
Apart from India Today, Times Now has also been locked in a bitter ratings battle with Republic TV, and it wasn’t going to let it off lightly. Dramatic proclamations by the anchors, allegations flowing thick and fast while demands of the police to arrest Goswami also kept popping up.
Shivshankar, explaining what the TRP ratings mean, said that every Thursday, hearts of journalists at Times Now are almost in their mouths as they await weekly BARC data.
A visibly miffed Shivshankar, whose chosen sobriquet from Goswami was “national judge-in-chief” slammed Goswami for talking about due procedure, accusing him of disregarding any procedure and has threatened anyone who carries the Mumbai Police presser with defamation.
Taking the baton from Shivshankar, Navika Kumar kept up the tough line of questioning of Republic TV.
She said that if she doesn’t cover this, she would be glossing over the rot of her own industry. “A scam is a scam is a scam,” said Navika, adding since this is in public domain as a criminal case, and when it is a criminal case, “it is my Dharma as a reporter.”

CNN News 18’s Zaka jacob threw his hat in the ring as well and led a spirited campaign against TRP rigging by rival Republic.
He said that Mumbai Police investigation into Republic TV and two other channels allegedly rigging TV ratings is a welcome step and is the worst-kept secret of TV industry.
Jacob reminded viewers that the complaint has come from BARC, and not a rival television channel and hence important that this investigation does not turn into a witch-hunt.
Author-Journalist Saba Naqvi said that it is cheating as it’s about getting ad revenues by pretending to be ahead of others in terms of revenue.

REPUBLIC TV (9PM)
“This man is on weed. He can’t tell his nose from his ears.”