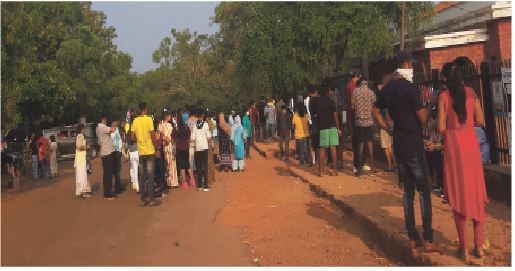 NO SOCIAL DISTANCING AT THE AGUADA FORT!

The tourists are pouring in but they are not happy to have to book their tickets online beforehand. Earlier it was easier to buy tickets on the spot at a counter set up at the Fort Aguada, a famous scenic sunset point of Goa. Many also grumbled about the new parking charges, Rs100 for four-wheelers, Rs50 for two-wheelers. The new charges came into force from end-October. All this is to say before you go sightseeing in Goa during Covid-19 times be sure you do your homework, or you may be sorely disappointed if not in an angry rage no good for your heart! (Pic by Heena Nawar)

UK HAS imposed another lockdown to counter the growing number of Covid-19 positive cases. They have recognised the following facts:

HIGH-HANDED GOVERNMENT!
THE very controversial and high-handed move by the cash strapped Goa government to waive the casinos from having to pay a whopping Rs277 crore is outrageous to say the least. This contentious attempt by a debt ridden government which has been borrowing to the hilt has raised many eyebrows and rightly so.
Ever since the lockdowns almost all businesses have come to a stop and despite the opening up they are still suffering losses and miseries. So this preferential treatment only for casinos is questionable. The casinos trade on river Mandovi is running very unregulated. The appointment of that gaming commissioner for casinos was an utter eyewash. As no rules are framed he is powerless. And the promised casino policy has yet to see the light of day.
It is no secret that the casinos are an outlet for black money laundering. The government should have proved it is bona fide by mandatorily making all transactions on casinos cashless.
As leader of the Opposition, Manohar Parrikar, vociferously branded casinos as a “social evil” and called them “dens of vice.” While spearheading his agitation against casinos Parrikar had vowed to make sure that all of them would be thrown out of Goa if the BJP came to power. In a dramatic U-turn in March 2012 after coming to power, the BJP has gone all out to promote, shield and increase the number of casinos!
Last year the government officially declared that the “dens of vice” and “social evil” are now an integral and vital part of Goa’s tourism agenda. Goa has become the country’s gambling hub with its associate evils of prostitution, narcotics, crime, flourishing side by side and growing day by day.
— Aires Rodrigues, Ribandar

DONALD TRUMP FLUMMOXED?
NOVEMBER 10, 2020 is the final of the IPL T20 to be played at Dubai, UAE, between Mumbai Indians and Delhi Capitals. It is to be seen if a cleverly disguised `doosra’ will become the turning point in the final. In America though in cricket parlance, it may be stated the Joe Biden bamboozled Donald Trump with a clever doosra, though in a tantalisingly poised outcome.
This doosra can however have another connotation. The year 2020 has been really lucky for Biden. His date of birth is 20.11.1942 and that of his running mate Kamala Harris is 20-10-1964. Both president-elect Biden as Harris have birth date similarities. Also coincidentally though in the year 2021, the Democratic president and vice-president elect will assume office on January 20, 2021. Could the Supreme Court, the ultimate arbitrator reverse the outcome?
— Elvidio Miranda, Panaji

NO TO BIOMETRICS
SOME of the fair price ration shops of the civil supplies in Goa are still insisting on biometric finger scan to distribute rations from fair price shops, even after the coronavirus pandemic scare and transmission is still so active. Family members from different households are not allowed to collect on their behalf.
I have seen many fair price shops insisting on biometrics for distributing ration even to the vulnerable elderly even under these virus conditions. Virus can spread like fire because of this practice! Fair price shops and civil supplies department are putting Goans at risk because of this finger scanning which requires you put your fingers on the scanner which touched by many. This practice of scanning should be immediately stopped at least during the duration of the pandemic. Lives should not be put at risk of infection.
A few people are abusing the system but everyone should not be punished and people should be allowed to collect rations for others with their cards. With the government distributing onions and grains, there are huge crowds and queues maintaining little social distancing or hygiene consciousness at these fair price shops.
Fair price shops also tell you to make an application to the mamlatdar to authorise someone as a proxy to collect ration on your behalf. No one should have to suffer this hassle knowing about the crowds that gather there and bureaucracy which exists in offices.
Until Coronavirus disappears fair price shops should not insist on personal fingerprints. We hope our honourable Chief Minister Pramod Sawant and civil supplies minister is listening to all this and do something about it. It is my real appeal.
—Jo Diaz, Cavorim