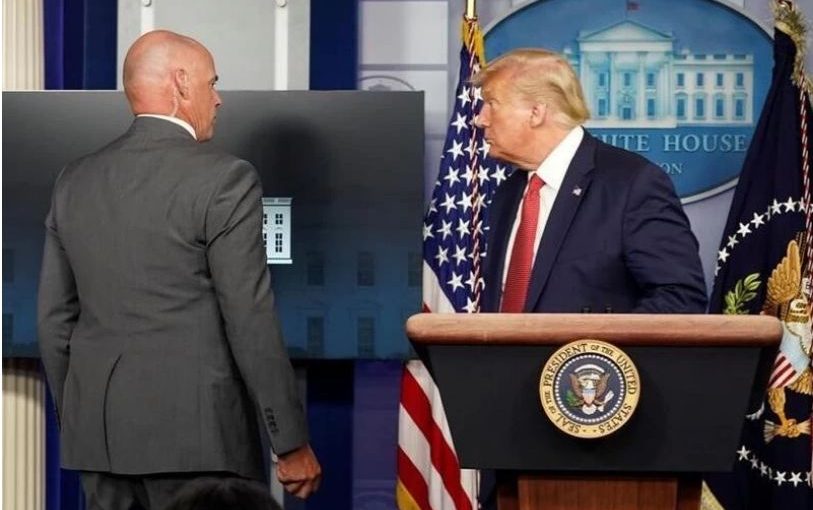 OBSTINATE: Donald Trump has refused to accept the electoral verdict and is insisting the Democrat party has stolen the elections from him. This despite the fact that even the courts have refused to entertain his charges on rigging in historically Republican strongholds.

Though Donald Trump has been convincingly defeated in the US election he is refusing to hand over the keys of the White House to winner President-elect Joe Biden! The defeat of Trump represents the victory of democracy over a Modi-style dictatorship. Unfortunately, unlike in the US, there is no limit to how many terms a prime minister can be prime minister in India……

THE defeat of President Donald Trump in the US election is very reassuring for us in India. Trump’s defeat proves that though you may be able to fool some of the people some of the time, all the people some other time but not all the people all the time. There have been many similarities between Trump and Modi. They were and our great bull-shitters. They are great spin-masters. Both of them have done great damage to their countries.
In the case of Donald Trump among his greatest follies was his racial prejudices. He did not like the blacks as the Negro community (of African origin) is called in the United States. He hates the Indian immigrants from India who allegedly take jobs away from white Americans. Even though ironically Indians were taking away not the low salaried jobs but the top jobs because of their superior skills. As dramatized by the fact the heads of a large number of American IT and even consumer companies are Indians.
And now even the winning Vice-President elect Kamala Harris (a young woman who is relatively much younger to winning President elect Biden who is 77) whose mother hailed from a Tamil Nadu village, may well become the first woman president of the United States! Trump hated the Mexicans the worst as he blamed them for the massive drug trafficking which takes place in the United States. Trump repeatedly tried to get the US Congress to approve the building of a long wall between Mexico and US.
Trump put a cap on H1B1 visas which are greatly in demand by the High Tech IT industry not in India but in the US. Trump stopped the concession extended to wives of high tech professionals to work in the US even if they were highly qualified in their own right.
In India of course Modi started the destruction of the economy with demonetisation. Which effectively meant that Modi overnight, indeed, from the moment he made the announcement cancelling both Rs500 and Rs1,000 notes. These were to be exchanged but mostly the only notes available for exchange were the newly printed Rs2,000 notes. The worst suffers were the small traders. Where would they find the change if a customer offered a Rs2,000 note? Presuming that the consumer himself had a Rs2,000 note. The so called objective of demonetisation was to completely eliminate black money in the country. For those who may not be familiar with the expression “black money” it includes all money which is not accounted for.

EVEN if you got to a shop and buy a chocolate and don’t take a receipt for it you are contributing towards the black money collection just as when you are buying expensive jewellery or real estate worth several crore more by cash then by cheque. It was finally proved that demonization was a foolish move as 99% of the notes in Rs1,000 and Rs500 which was scrapped came back to the banks. This did not necessarily mean that there was no black money. But even in the implementation of demonization there was so much golmaal with rumours that industrialists friendly with the BJP were given advance notice to deposit their notes.
To add to miseries of the common people of India Modi introduced the General Sales Tax (GST). Which was meant to be a substitutes for the hundreds of different taxes levied by the State and Centre. For instance in the case of petrol and liquor even now there is both Central and State excise. In the case of the majority of manufacturing commodities from pins to cars, the tax was only levied at the point of sale.
Which meant that an automobile manufacturer did not have to pay taxes each time he bought a component for the car like tyres or steering wheels or air-conditioners. In return the manufacturer got a setback on the expenses he had incurred on purchasing various raw materials. This was another disaster as in most countries which have introduced GST or its equivalent there is only one single tax.
In the UK for instance whatever job you take up regardless of whether it is as managing director of a company or a pizza delivery boy, 30% is deducted from the salary for social welfare. Out of this 30% the government offers you free healthcare under which you do not have to pay for medical expenses be it for the bandaging of an injured hand or heart surgery. The only problem is that in cases which are not urgent there is a long waiting list under National Health Service. Which is why many UK charter tourists to India prefer to get their dental work and eye operations and purchasing of spectacles here or specifically in Goa where all this is more economical for foreign nationals.
Unlike in the UK or the US the common man did not benefit in any way from GST in India. On the contrary many traders suffered as the GST on different items was not the same. If you were running a supermarket you would have to calculate the GST on food grain differently from cosmetics and aerated drinks. IF you did not submit your GST return by the 7th of every month you could be penalized. You also have to submit GST returns every quarterly, half yearly and annually. All this has done is increased the paper work that businesspeople have to do even though they are overburdened by other disastrous woes like the Covid-19 lockdowns.
IN the US President Donald Trump was repeatedly accused of favouring his close friends in industry. This also included his wife and sons who ran hotels and golf courses. Trump is also accused of favouring the Soviet Union and discriminating against China. Similarly in India Prime Minister Narendra Modi has been accused of going out of his way to help his close cronies like the Gautam Adanis and the Jindals. Right now for instance there are three major infra-structure projects underway in Goa at the instance of the Minister for Transport & Environment Nitin Gadkari.

THERE is a controversial move to double track the South Western Railway to increase coal transport capacity. There is a plan to widen highways to eight lanes to make it easier to move ore and coal. There is a proposal to set up a 220 mega volt transmitter plant in the middle of the Mollem Wildlife Sanctuary. These three projects entail the mass cutting down of several lakh trees to degrade forested land and it is not even for the benefit of Goa’s aam adami or even for Goa. It’s all for Modi’s industrial friends in Karnataka and Gujarat.
Donald Trump hated the media. Trump kept abusing the media of being prejudiced against him. Trump discriminated against media which did not support him when it came to giving advertising. Similarly, it is so also in India. Modi harasses and punishes the media in subtle and not so subtle ways. Some senior most journalists like Rajdeep Sardesai, Barkha Dutt, Shekar Gupta and most recently Faye D’souza were sacked because they criticized either the BJP government or members of the Cabinet. The major difference between the media in India and the United States is that the media in the US considers itself equal if not superior to even the president.
When President Trump started abusing the new President elect Biden all television stations in the US blacked him out. This was when Trump accused the Democrats of stealing the presidential elections and has at the time of writing yet to concede that Biden has won fairly and squarely. Trump is threatening to challenge the indisputable victory of Biden in the Supreme Court. Our only fear is that if Narendra Modi loses the 2024 elections he may also refuse to quit the seat of power. Unfortunately, India does not have a rule which bans prime ministers and presidents from serving for more than two terms as in the United States.