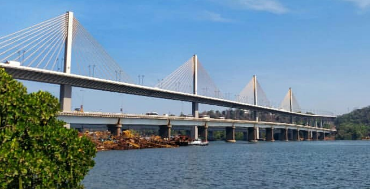 The chamcha of the late Manohar Parrikar including Rajan Parrikar and Dr Anand Virgincar, who misled him and were responsilble for inflating his ego, are now blaming outsiders including Rajan Narayan for Goa’s problems! Being a democratic paper, unlike BJPs mouthpieces, we believe in carrying articles critical even of Jio……

Fellow Goans, know that Goa’s best days are behind us. We are now sailing in the Indian sewer. The worst is yet to come.
Goa’s rapid decline has two causes: (a) India, which took over Goa and screwed us,malice a forethought, and (b) Goans – who bear primary responsibility for destroying Goa and helping Indians do the same.
Component (a) is not surprising at all. India’s post-1947 record of turning pleasant havens to sht overnight is impressive. The crucial thing to understand is that the damage done by India to Goa is irreversible. The other salient point is the speed with which Goa was degraded. Today we are reaping the fruits of the colossal blunder of 1961 when Goan freedom fighters allowed India to grab Goa without demanding safeguards and controls regulating land and in-migration. What the Portuguese couldn’t do in 450 years, Indians achieved in a mere 50. Once inconceivable, slums dot the scape today, and the paan-spit-sht uncouth North Indian/bhaiyya/Punjabi horse manure pervades the Goan air. Thank you, India, for nothing.
I do not yearn for the Portuguese, just in case someone gets the idea that my contempt for India’s ill-effects on Goa implies endorsement of the Portuguese.

When the issue of Goa being run over by Indians comes up, it is countered by the “constitution,” a document Indians have never read and have no use for except when it suits them personally. I ask did Goa have a seat at the table when you drafted your constitution Okay, I get that you grabbed Goa in 1961. Was there a vote taken asking Goans if they want to join your Union ? So what are you talking about, when you grab Goa was an illegal act in the first place.
But the big gun is not the constitution. In these politically correct times, it is the stifling of any discussion through the deployment of words like “xenophobe” and “xenophobia.” I don’t fall for that trick. You can call me whatever you want (I know which finger to show you in return).
Do Indians really think that our fund of hospitality is limitless That we Goans should welcome every Indian who wants to make a home in Goa Why?

Which fantasy world are you living in?

WHO GAVE THE MANDATE FOR THIS TRANSFORMATION OF GOA ?

Certainly not the Goans. If you poll Goans on migrants, you will know exactly what they think about the influx of outsiders. Ask Goans about mega-projects overwhelmingly they reject them. Privately Goans mutter displeasure about the surging numbers of outsiders all the time,but few are willing to place their voices in the public square.
This entire transformation of Goa is ILLEGAL. Voter rolls have been stuffed by Goan politicians with migrant vote banks. Mega-projects and land deals catering to outsiders almost always start out illegal. But “illegal” and “legal” in India are fungible terms.
What has happened in Goa is at its core undemocratic and without the consent of the majority of Goans. Yet the usual suspects who are otherwise vocal about “democracy” are not to be seen or heard on this topic.
None of this would have come to pass if Goans had gotten their act together. Goan society is deeply corrupt and it is reflected in the people we vote into power time and again. We are a fractious lot. It is alright to have all manner of opinion in the marketplace but at some point we have to be willing to join hands for a common cause. That never happens in Goa. The fault-lines of religion divide us, and make us suspect one another’s motives at every step. We will give away the fort to some dirtbag from Delhi than trust a fellow Goan.
The outsiders have us Goans figured out. Even the ghatis know how to play the game. It takes very little to puff up the Goan’s silly ego. A little dab of praise here, a word about our “hospitality” there – that’s it, you’re in.
The outsider quickly learns that it is facile to play one Goan against another. Take the example of the Marxist scum with a Hindu name, preening as the token Hindu here on Goanet, making sure that distrust and fear keep us apart (the guy of the “Broken Piss” fabricated report fame). Unfortunately for him, I rained in on his parade along with Dr. Anil Desai and Dr. Anand Virgincar.
Then we had the Malayalee editor who arrogated to himself the task of defending the Cristo citadel against the ‘evil’ designs of the Hindoo Manohar P. It took Catholics over a decade to know the guy for the rotter that he is. Now I hear that Goan Hindus have run to some bhailo Baba to help save Goa. This is how pathetic we are. Dempo and Salgaocar would rather have some mediocre Indian putz helm their publications than hire a Goan.
Let us also recognize that Goans have colluded in the selling of large tracts of land. Sharad Pawars’ cronies now own huge parcels in northern Goa. Goans themselves have enabled the mega-projects in their villages aimed at outsiders while displacing poor Goans from their old homes. DLF and Raheja can walk in anytime, bribe the sarpanch and panch, and take over while the rest of the village looks on helplessly. For years we have had the extraordinary situation where the panch and sarpanch are on the side of mega builders, in opposition to the villagers who elected them. But the Goan in unperturbed. Mhakka kityaak podlam re

And finally, let us not forget the opportunistic dirt bags masquerading as activists. I have already dealt with the GBA in another post. NGOs have also become a cottage industry. The foundations of Goa are being dismantled but the Goa Foundation will be forever. New NGOs are surely taking root now to service the ghatis and all the poverty that India has exported to Goa. Just imagine the grants and invitations to foreign conferences that will pour in. Poverty makes for great business. Ask that guy, the Slumdog Srivastava, who goes around giving seminars.
Soon they will be telling us that beautiful Goa only existed in our myths and that ghati culture is the real Goan culture.
The celebrations planned by the Goa govt for Dec 19 are a slap in the face of every self-respecting Goan, and must be boycotted. No, disrupted.
It is Goan money that is being squandered. 50 years of Indian colonization – welcome to Hell