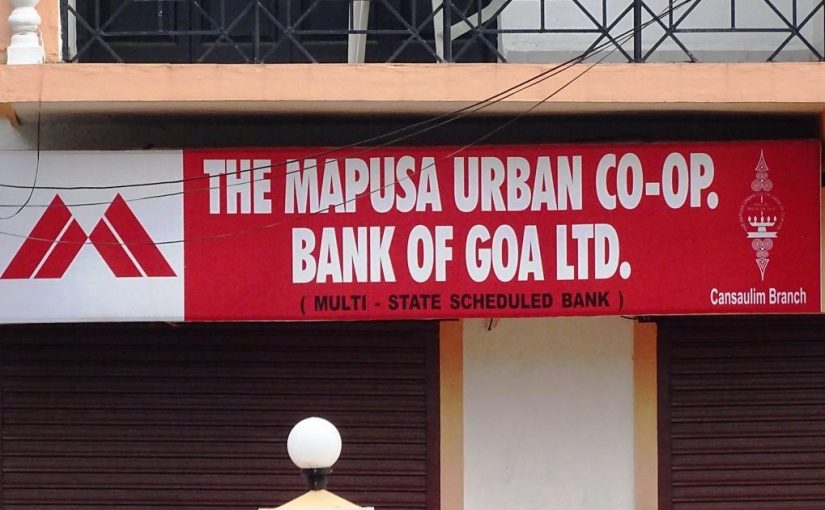 RETURN: The highest return on investment has been real estate. Flats in gated colonies which were bought for Rs30-40 lakh are now valued at almost Rs1 crore plus, plus. However, at the present price of real estate you may have to think twice, as it may not increase as sharply as it has done in recent years.

The collapse of the multi-state Mapusa Urban Cooperative bank based in Goa has shaken the confidence of depositors in all co-operative banks. The Reserve Bank of India had imposed limits on how much the depositor can withdraw from his own account. The bank is now under liquidation. It is therefore important to deposit your money only in scheduled banks accountable to the RBI and covered by the deposit insurance schemes.

THE Mapusa Urban Cooperative Bank Ltd had its license cancelled by the Reserve Bank of India under Section 22(4) of the Banking Regulation Act 1949, for the failure of the former to adhere to banking norms. This was the final straw, paving the way for its total closure or liquidation, since several attempts for merger with another more financially strong bank has failed. This bank, once the pride of Mapusa town was set up in 1965, a few years after Goa became part of the India. It was promoted by a few prominent townsmen, to cater to the banking needs of people in Mapusa. It was the bank, for several commercial establishments in the North of Goa.
Prominent on the Board of Directors was Ramakant Khalap, a politician of note of yesteryears. With the RBI order the entire BOD had to be disbanded and a new BOD elected. Now with the cancellation of its license, on April 20, 2020, the bank has effectively had to close shop. Similarly, financial restrictions have been placed on the Madgaum Urban Cooperative Bank, while the bank has been on the look out for a merger with another more financially sound bank. But its not only the Goan cooperative banks that have felt this pressure. Cooperative banks the country over have come under the scanner!
Cooperative banking in India is known for having a loose regulatory norm and this is compounded with the fact that several of these banks do not have requisite professionals on the Board of Directors, while management does lacks requisite professionals or commercial skills. Thus, many of these banks have found themselves in crises that they have forced them to shut shop. A few of you may have heard of Madhavpura Mercantile Cooperative Bank in Gujarat, that was one of the main financiers of Ketan Parekh, the stockbroker who shook the stock market in the beginning of this century. This bank would lend funds to stock brokers who would then speculate in the market. With the fall of the market, these stock brokers were unable to pay back their borrowings and it led to bank failure. The bank has since shut shop since its license was cancelled.
On September 24, 2019, the RBI placed curbs on withdrawals from the Punjab Maharashtra Cooperative Bank (PMC) while initiating a probe into its defaulting loans and accounting practices being followed. This was followed by the arrest of the managing director and some of the directors of the BOD. Efforts are being made to merge the PMC with another financially sound bank. On April 30, 2020 the RBI cancelled the registration of the CKP Cooperative Bank, effectively shutting down the operations of a 105 years old bank. Yes, the heat is on the cooperative banks and its shareholders and customers all over the country as also in Goa are a worried lot!
The cooperative sector, especially the banking segment, is in doldrums. The Reserve Bank of India continues to oversee and has now stepped in to regulate the activities of these banks. India has several cooperative banks where the administrative supervision lies with the cooperative department of the respective states, while the banking regulations are overseen by the RBI. The state authorities, overburdened with a multitude of cooperative societies, have neither the time nor the expertise to deal with these financial institutions. The Registrar of Cooperative Societies plays a limited role, primarily during the elections to the Board of Directors. Therefore, it is the Reserve Bank of India that performs both a supervisory as well as regulatory role in the working of these Banks
.
What Ails the Cooperative Banks?

MANY of the cooperative banks functioning under dual regulatory authorities were neither controlled nor supervised by either of these authorities. A majority of the cooperative banks were founded by individuals or personalities either politically connected or associated with a particular sector, and most of the deposits as also lending was to the people or concerns associated with the particular sector. With loose regulatory overseeing, lending was based on personal contacts than any risk analysis. When the particular sector did well in the market, there was no problem with repayment; but if the sector was stagnant, the loans turned from sticky to default. The borrowers generally known to the directors, made it difficult for the management to apply stringent methods to recover these monies. In several of these banks, the loan book was skewered in favor of a few big borrowers, it could be a particular company or industry and if these failed, the entire bank collapsed.
Cooperative banks face a twin challenge. Firstly, there is competition not only from the big scheduled banks but by now from a host of small finance and payment banks that have grown in the last few years. Secondly, many of the cooperative banks do not have the internal and regulatory controls to deal with frauds and mismanagement, that is often rampant in these banks that often survive on the basis of their personal relations with their customers.
In order to deal with the issue of professionalism on the Board of Directors, the RBI has instructed all cooperative banks with a paid-up capital of Rs100 crore, to constitute a Board of Management to advice the Board of Directors. The mandate of the Board of Management is similar to that of the Board of Directors; indicating that the RBI is of the opinion that the Board of Directors are often persons who do not have an intimate knowledge of banking procedures. Further, cooperative banks are expected to raise lending to the priority sector to 75% as against the present limit of 40%. This directive would compel these banks to direct their energies to sectors where risks are greater and the chances of default more likely.
However, not all cooperative banks are going down under. The Citizencredit Cooperative Bank has four branches in Goa at Vasco, Madgaon, Panaji, Porvorim and Mapusa. It has achieved an after-tax profit of Rs14.76 crore on a relatively small share capital base of Rs15.10 crore. Its total deposits stood at Rs3,168 crore and advances at Rs1,488 crore at the end of the last financial year. Its net non-performing asset position is only 0.87% with a provision coverage ration of 81%. While Citizencredit Cooperative bank is comparatively small, it is professionally run and its service is excellent.
But sadly, the majority of our cooperative banks are struggling with a bad loan book, increasing non-performing asset position and poor managerial skills to enable them to thrive in the recessionary economy of today! Would this year, 2021, see many more cooperative banks fading into history? It’s time you took care of your money!