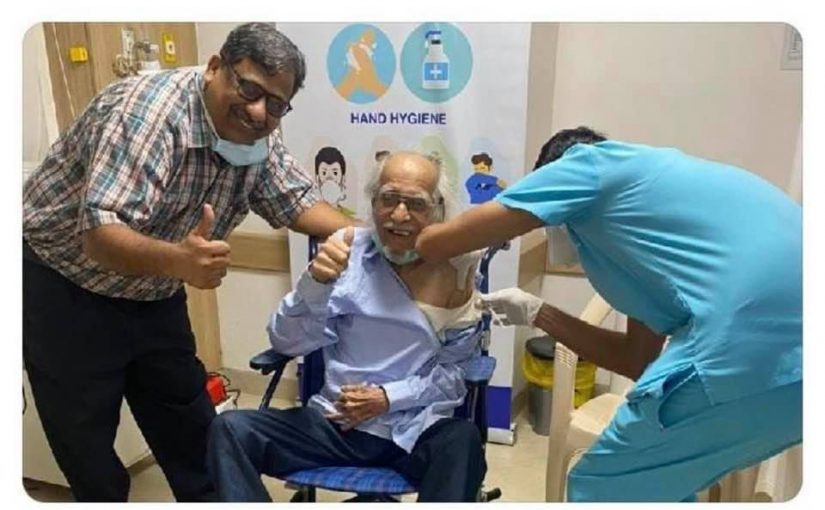 GUESS WHO TURNED UP FOR A COVISHIELD VACCINE!

None other than 96-year-old Vibhushan awardee Laxman Pai Phondekar, renowned artist. He came along in his wheelchair for his first jab on March 3, 2021 and while Manipal hospital’s director-oncologist Dr Shekhar Salkar and staff dance attended around him, the nonagenarian bared his arm for the Covid-19 vaccine and quipped encouragingly, “If I can take all others also should take!” The artist was accompanied by artist and his long-time associate and avid art collector, Shaistha Thapar.

THE enormity of the futility of felling trees in your own area can only be felt when you are the victim of felling of trees yourselves. The people of Panaji city may imagine what would happen if all the trees in Altinho, Campal and Miramar were to be felled.

The consequences would be that the ambient air quality of the air in Panaji would deteriorate beyond measure. It would be the result of trees not being there to conduct the process of photosynthesis which replenishes city environment with oxygen. Also, trees offer shade to birds and without trees there would be no chirping, warbling and twittering of the birds to take pleasure in; there would be no  familiar call of the restless squirrels as they dart from tree to tree. Do Ponjekars want to live in a barren city devoid of trees?

So is the case in the villages where people live rustic lives in harmony with the natural world. Imagine how dreary life would without trees, birds, squirrels, butterflies – fresh air! This is why I am writing this letter so that aam and khaas aadmi will become conscious of how much a good environment contributes towards good health and wellbeing.

Despite all this evidence we, the people support the overwhelming felling of over 70,000 trees to make way for the three infra projects in Mollem! This will  definitely cause unimaginable damage to the Bhagwan Mahaveer Wildlife Sanctuary and the Mollem National Park which is a much wider green area of bio-diversity. All this invaluable green protection will disappear if the people of Goa do not come out in unity to oppose the forces of destruction of the Western Ghats areas and which also enjoy United Nations protection.

Will we understand and regret only when we become victims and the receiving end of high temperatures, low oxygenation, and no small joys of life?

AS usual the GCCI and ASSOCHAM IN Goa have  handed over their pre-budget “wants” to Chief Minister Pramod Sawant! GCCI started with apple polishing and then asked for tax incentives – a blanket call! Recall how the casinos had their fees waived: now, they are set to gain 100 fold by holding pro-boxing matches on the casino! Is the casino designed or licensed for the same? The tax waving due to pandemic should have been restricted up to small industries alone.

ASSOCHAM says MSMEs must be given all licenses for seven years! Recall what these MSMEs have done in Cuncolim: discharged untreated effluent into the ground water table through borewells! Licenses for seven years means giving them freedom to do what they want to kill underground water resources. ASSOCHAM and GCCI do not want to own responsibility for environment destruction: they only “want!”

They want tie-ups with polytechnics for skill development, saying it will lead to employment.  Why are they not demanding that all industries use only ITI or polytechnic qualified people? Why is the industry using thousands of self-taught carpenters, plumbers, electricians and engineers? Supervisors? If this is the case why have ITI’s and polytechnics? Why are they not attracting well-paying companies to Goa? Not to upset their poor wage structure.

Strangely, there is no mention of sustainability and environment protection. Yet, just a few days back the government praised the appointment of Goan woman Dr Ligia Noronha’s appointment to a high post at the United Nations!

Human and natural resources are the key to long term sustainable industrialisation: but our industrialists look only for short term gains and that too only their own gains! They offer nothing to their employees on the health front, are they employing robots? Why not insist on decent accommodation for their workers? Because they pay less?

This are the areas in which GCCI and ASSOCHAM actually need to work on: mating industry with local resources and environment for a sustainable future and not a jhat phat paisa banao aur tamasha dekho!

TO ensure proper and efficient functioning of the very vital police force and for the maintenance of proper law and order in the State, the government should on a priority fill up those long vacant posts of Deputy Superintendent of Police (Dy.SP).

The Goa Police despite having a sanctioned strength of Dy SPs, very surprisingly currently a huge number of these posts are lying vacant on account of which officers are holding multiple assignments and are unable to do justice to their job. In violation of  human rights police officers cannot be overburdened, it would have an adverse effect on their health, efficiency and wellbeing, besides the welfare of their families neglected.

Politicians in power while eyeing huge monetary gains may possibly want to bring in some Dy SPs by direct recruitment, but in the interest of good policing, only Police Inspectors should be promoted as Dy SPs, this rank being their rightful next promotion.

Good policing is a multifaceted issue while experience besides expertise comes only after years of active service in various roles and situations. Direct recruits would have to undergo years of training and it would take them another many years to learn the law, rules, regulations and procedures. For many of them by the time they mature in the service it would be time to retire.

By promoting police inspectors as Dy SPs it would also have a very negligible financial implication on the State exchequer which is already in dire straits. More importantly bringing in direct recruits would have a very adverse effect on the morale of the current police inspectors who after years of service look forward to their next promotion as a Dy SP.

There is also an urgent need to weed out from the Goa Police at all levels anyone who has the faintest link with the crime mafia. With zero tolerance to corruption and indiscipline being the focus, our chief secretary and the DGP must take appropriate measures to ensure that rule of law, fair play and recognition of our police force without any undue influence from outside, prevails at all times.

For better community policing there is a need to reactivate the monthly interactions the police inspector at every police station used to have with local residents. It is only a well-equipped and well rewarded police force with a high morale that will ensure the safety and security of the Goa and its people.

BOTH Benice Pereira and Rajan Parrikar have expressed their  own experience on casino activities in Goa and are convinced that casinos are akin to poison coming into Goa. This true! I will share my own experience about casinos.

I was told by a professor of environment that casinos are here to stay in Goa forever. He gave me some reasons gathered from his colleagues.  In the upcoming CCP elections a group has already been formed by Panaji MLA Atanasio Monserrate and everybody else decided to counter his plan by forming another group called We Ponjekars. This earlier group which I called the Saffron group is now in jitters because of the new group opposing its casino ideology!

A few of the Catholic people in Babush Monserrate’s group started contacting prominent citizens in Panaji to support them, probably advised by their leader Monserrate. The secret leaked and a  Congress leader was also contacted to field a weak candidate so that the Saffron group candidates get a comfortable majority win.

So now our newly formed group is getting a taste of the poison flowing within their group in order to destabilize them and this is being noticed by  peaceful senior citizens, this will result in pouring of heavy money supplied by Mr Moneybags Big Daddy. So the casino vessels will never be shifted away from the Mandovi river in Panaji!

Rajan Parrikar has rightly observed that he saw  vehicles moving in the night at 2am when he was walking with his wife for a clean and safe walk! Vehicles zoomed by at that time too with casino guests and female employees working on casinos, most of whom are from Nepal and the North Eastern states. Casino business goes on through the night.

New constructions are coming up especially in Caranzalem and Dona Paula and what is above the  8th floor is for casino staff business mostly in these buildings. CCP, Chief Secretary, Traffic Cell Tourism department and other government departments are keen to authorize and approve the new constructions, so that lots of new tourism activities coming into Goa may be supported.

The poison is spreading and creating an impact which will transform our peaceful sae Goa into a hell. Witness the pimps our at Miramar and close to hotels offering their cards, casino and hotel pamphlets and even fee entry to casinos clogging up the river Mandovi. Panaji gardens in the vicinity are especially for these businessmen agent ghanti visiting for casino business. Not even a single senior citizen may feel safe in a garden today!

The only bad luck for the casino owners and pushers is that many of these new high rise constructions are having their own problems. Goan coastal land is naturally sandy and any excavations for construction entail digging to great depths…thank God for this for then at least height of buildings is restricted, or these new honky tonky constructions would zoom up to a dizzy 50 floors and above. This would be very dangerous for the future of coastal Goa.

Ponjekars like me think that such cheek by jowl high rise buildings should be reviewed, penalized, demolished for breaking critical urban environment laws. For example, this Big Daddy owners and their builders are already under pressure from casino industry to complete constructions by hook and crook even though approach routes are narrow and difficult and normal size is supposed to be 10 metres width instead of the present width which is only 4.5 metres most places where constructions are desired.

The Parrikar samadhi construction is huge one, whereas Parrikar cremation place could be  5 square metre at most. The huge construction coming up by the side of the Parrikar memorial is to accommodate casino employees and house other activities to keep the casino industry growing and booming – it’s something any new government coming in may not be able to control! My Goa is going to the dogs.