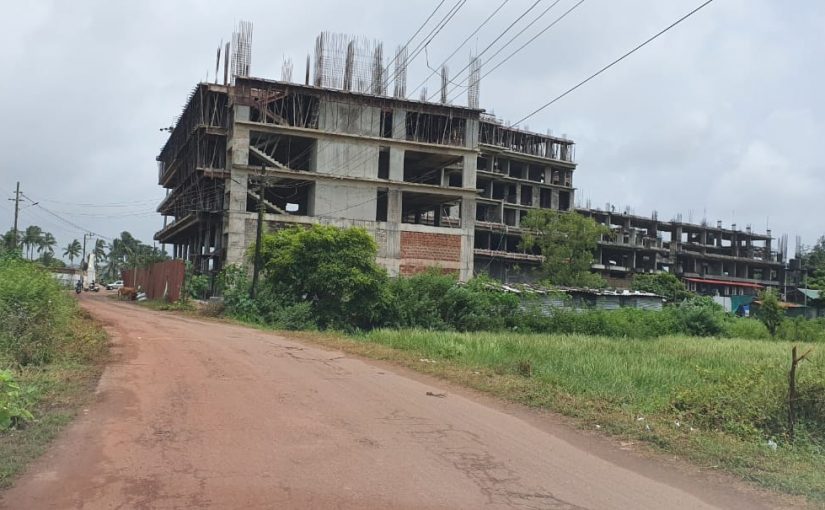 TALEIGAO VERTICAL SLUMS IN THE MAKING: Look at these low-lying paddy fields near St Michael Church being destroyed cleverly.

Once upon a time Taleigo or Plato de Taleigao is it was called, was a highly developed village. Today it is located cheek-by-jowl to capital smart city Panaji with a dying agricultural landscape. Once it was a happy place, now it is a contentious place! All this because politicians colluding with real estate developers have decided that Taleigao should go the way of vertical slum city, taking over the green, green fields of home for many niz Taleigaokars.
Here is a niz Taleigaokar, born and bred in Taleigao, recounting the story of development going mad for political power, immense profits and the reins of control in a few hands only. Advocate Pundalik Raikar pertinently asks along with other fellow Taleigaokars: Is what is going on in Taleigao smart urban development for a peaceful, sustainable future? Or is Taleigao increasingly being propped up to turn into vote banks for politicians little interested in first putting into place infrastructure, drainage and sewage systems, redressing growing water woes – no insightful and objective planning at all!

TALEIGAO for most of the people who have lived here or have had an some association with this tiny sea-side village, is synonymous with paddy fields, hilly slopes and water bodies. It represents part of an ecosystem which system which best amplifies tranquil village life of old.
Alas, Taleigao is no more the old happy face of Taleigao. In a fast changing scenario the village has not been left aloof from the impact of the modern urban life. From every practical point of view the village today has a semi-urban set-up with high-rises coming up on uncultivated paddy fields of old.
For some years now Taleigao has been seeing a mindless spillover effect of the congested development that has been taking place and continues at an accelerated pace to match the adjacent capital city of Panaji – which has very little space for internal development. The Taleigao is growing today may be best reflected as the Navi Mumbai of Goa!
When we look at Taleigao today we need to keep this in the background and see from that perspective. Taleigao today is mostly inhabited by the tribal population all along the hilly slopes of and up to the Bambolim plateau. The rest of the plains of Taleigao are outside the tribal areas and inhabited by a mix of population of different faiths.
Over the years the village has seen a steady rise in its population and this has put a lot of pressure on land resources. What is interesting to note is that Taleigao was traditionally and culturally a vegetable and rice bowl and was renowned as such throughout Goa. For example, the Taleigao brinjal also has the GI granted to it.

TURNING POINT
THE turning point in the changing landscape of Taleigao came in 2006, when the ODP (Outline Development Plan) was notified. Since then there has been a direct assault on the nature and character of the village of Taleigao and its verdant agricultural environment. Unplanned development has taken place so rapidly that within a few years from now beautiful Taleigao which retained its identity for decades even after Liberation – is now going the slum way with slums dotting the landscape here and there. For example, Camrabhat.
The creation of slum pockets is by design and not at all the natural process – certain political imperatives have engineered the formation of slum pockets! Slums are developed as vote banks by local politicians and the results are haphazard and detrimental to any quality of life for the people. In the last six months of the current Assembly we have seen political talk and nukkad (cliques) are slowing taking shape and every person is seen getting himself trapped in some political offer.
In the last 20 years while some semblance of development has been seen in the village panchayat area, it has done more damage to the village than the benefits that have come to the residents of Taleigao. The superficial benefits that are said to have been granted in favor of the tribal people and other villagers are those that cannot be enjoyed directly by them.
So what exactly is that the villagers have lost in the last 20 years? It has been noticed that in the last 20 years owing to the rampant and haphazard development that has been promoted by the present ruling dispensation, the low lying fields have been destroyed very rapidly. Large scale purchase of the fields by a lobby of political groups has taken place and as such the fields have emerged as the only real estate asset.
A large chunk of the village population has been made dependent on doles sent to the needy, making them vulnerable to political manipulation during elections and allowing a certain political dispensation to remain in control of the real estate boom business for years altogether.

AD HOC PLANNING
THE ODP-2028 does not reflect any planned development and as such, besides giving the builders lobby a carrot in hand – there is nothing for the common Taleigaonkars. Taleigao’s so called development does not feature any places of recreation for senior citizens, the village does not have a library for students and those who would further liked to educate themselves. We have no good market and vendors, especially the fisher folk, squat around dotting the roadside to sell their stuff.
Of late more and more vegetable vendors take over the roadsides to sell local field produce, remnants of which still survive, but will soon vanish to satiate the hunger of the builder’s mafia for more land. The present state of affairs in the village panchayat area of Taleigao can be summed up as that of complete chaos, as perpetuated by unplanned development, promoted on the basis of the lopsided Outline Development Plan ODP-2006 and ODP -2028.
At present the village of Taleigao lacks a good leader. Taleigao needs a plan that will take care of human resources – it is surely an important part of the planning process. Unplanned and haphazard development of Taleigao must be stopped and the craze to migrate and grafting of the rich onto this tiny village — albeit as their second home — must end. This is doing more harm than good to the village and its original villagers. Most of the development taking place since 2006 is single person-centric. In the name of development direct assault is made on the low-lying fields which are seen as prime real estate.
Taleigao village needs a more balanced development so that changing climatic conditions don’t affect the people living here adversely. Most importantly the people of Taleigao need facilities for themselves. Growth and development by importing or wooing prosperous people into is not and cannot be an answer to the development of a resident population who have been living their village lives for generations. This section of people are getting lost due because of the lopsided, haphazard and unplanned development model as per political compulsions!
In the last 20 years Taleigao has seen the rise of buildings, roads and apart from these there has been no other growth of any consequence in Taleigao. The major contribution to the panchayat revenues has been from construction licenses and related fees and matters. Most of which is evened out in some kind of mysterious, invisible development. The tendering process of the village panchayat under the present ruling dispensation is opaque and it is understood that the normal procedure of tendering is not followed.

LEADERS PLEASE!
TALEIGAO is in urgent need of a change in leadership or the present vested interests leadership will only take it to its future doom. It is said that nature has its intrinsic value which outweighs itself as an economic asset. This is certainly true of what has been happening in the village of Taleigao and to preserve and nurture it back to its pristine glory — planned development is necessary and the need of the times in which we live in. For that to happen, the people of historical village Taleigao must work together in unity to change its leadership at local level.
The present leaders can by no stretch of imagination be trusted with the future of Taleigao’s future. We need to appoint/elect selfless, people-centric leaders who have a vision of sustainable yet prosperous future. Only then will Taleigao retain its identity, yet build happily on it.

(Advocate Pundalik Raikar has been living in Taleigao since birth. He was a student leader at college and university level, he has been a teacher of travel and tourism for ten years which includes seven years as a principal of MITHM-Mushthifund Institute of Tourism & Hotel Management, Panaji. He is a practicing lawyer at High Court of Bombay at Goa. He has been fighting for a better, greener Taleigao with sustainable development and takes a keen interest in politics.)

One thought on “WHAT AILS TALEIGAO?By Advocate Pundalik N Raikar”