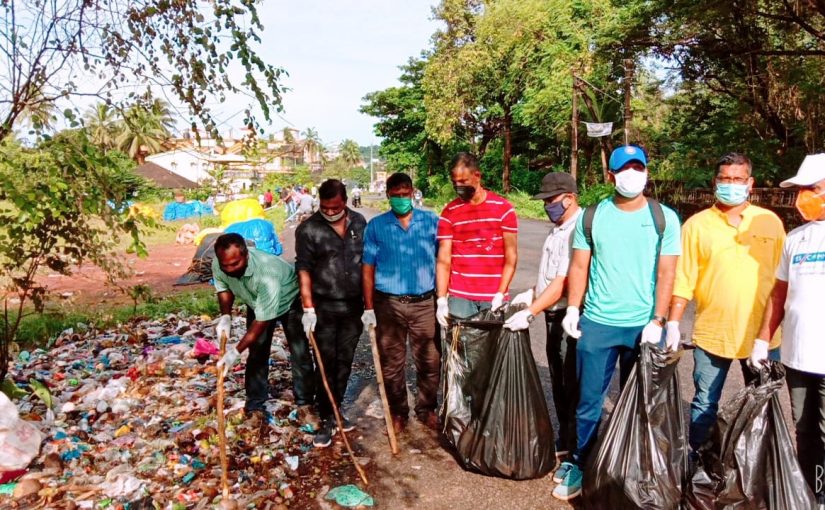 CHEERS AND THANKS FOR SUCH CLEAN-UPS: The Salcete taluka office of the Directorate of Sports and Youth Affairs successfully organized a two-day cleanliness drive program under Mission Clean India to commemorate Azadika Amrit Mohatsav. This is a call given by the Ministry of Youth Affairs & Sports (Govt of India). The clean-up drive in collaboration with the South Goa Collectorate commenced in the morning from Ravindra Bhavan (Margao) to Damodar Temple (Fatorda), and from there to Rosary School and periphery of PJN Stadium in Fatorda. About 55 sportsmen/physical education teachers along with office staff got started led by Smt Angela de Abreu Naik (former international taekwando player) and Jivba Dada Kerkar (awardee and many time winner of national and international titles). The focus of the drive was to pick up the plastics strewn carelessly by an uncaring public. The first day’s clean-up collected 40 bags full of garbage! The second day’s darive covered the areas of Davorlim Sports Club Ground to Govt High School, Davorlim and DSC Ground to Saw Mill Road and on to Kumra Zor (natural water body). Again it was a sorry story of menacing plastics everywhere. The second day’s drive ended with a collection of 45 bags of plastic garbage. Participants included Filomeno Costa, police inspector, Dr Manoj Prabhudesai, consultant (Orthopedic GMC) and many others. Laxmidas Mangeshker, APEO, Tulsidas Desai, ZSO, Manthan Adpaikar, TSO, with other staff members coordinated the entire program.

THE new week starts on Monday after the weekly holiday on Sunday. The week days are very important in terms of jobs and business. WhatsApp, Facebook and Instagram, the social media apps, went down for a while due to a technical glitch (server down) from 9.30pm on Monday. It took till 4.45am in the morning to undo the glitches.
All three apps were not running on both the web and smartphones. It hit the world. In all these cases, it is important that the engineers work hard to solve this technical problem. There was pressure from all over the world, not just one place to start the service.
In such a difficult situation it is worth learning to work with patience. According to ‘Whistleblower’ Marcus Zuckerberg was hit with 600 million due to the problem of the three services. Zuckerberg has apologized for the inconvenience. The use of WhatsApp is invaluable in terms of job-businesses.
Facebook and Instagram are not used to send important working messages. Here there is a predominance of personal things, for example, photos of trips, shopping done, services offered, other sundry posts, etc. As a result, the working class did not feel that the service of those two apps was disrupted.
But since messages were not going through WhatsApp there was a commotion. If the same obstacle had been created in the morning session it would have been terrible. Many breathed a sigh of relief as the technical problem occurred at night. WhatsApp has become ‘oxygen.’ If anyone doesn’t get it, he will get restless.
It was night in India when the problem arose, but in some countries of the world it was working time. In India, Facebook has more than 410 million users and WhatsApp has more than 530 million users. Instagram has over 210 million users in India. India is a huge market for these three social media platforms.
The trend started immediately on Twitter. It rained a torrent of mimes. Many also said that they used Telegram app during this period. Everyone should have some optional apps. This must have been noticed by many at this time. Learning from this, they may have overcome the problem by downloading the necessary apps. Even so, why dig a well when you are thirsty? Without relying 100% on the service of single company.
We should also have alternative routes (apps) so that we don’t have to face the same problem as others.
—Jayesh Rane, Mumbai

SCRAP ALL OLD POLITICIANS!
OWNERS whose vehicles are more than 15 years old will have to shell out eight times more money to renew their registration, according to a notification issued by the Ministry of Road Transport & Highways and which will come into force with effect from April 1, 2022. The Centre is preparing the ground to phase out old/polluting vehicles in line with the national vehicle scrap policy.
Registration renewal of a 15-year-old car will now cost Rs5,000 compared to the existing fee of Rs600. For motorbikes that are more than 15 years old, the renewal charge will now be Rs1,000 compared to the existing Rs300. Similarly, a fitness renewal certificate for a bus or truck older than 15 years will cost Rs12,500 instead of Rs1,500. For old medium goods or passenger motor vehicles, the cost will be Rs10,000.
The notification says that an additional fee of Rs50 for each day of delay after the expiry of certificate of fitness will also be levied. And in case of delay in applying for renewal of certificate of registration, an additional fee of Rs300 for delay of every month in case of private vehicles, and Rs500 for delay of every month in case of commercial vehicles shall be levied.
The ruling dispensation at the Centre, after harassing an already over-burdened aam aadmi by continuously raising prices of petrol, diesel, gas cylinders, since the start of the pandemic, now seems to be hell bent on forcing people to abandon their old vehicles and buy more expensive new vehicle models – by maliciously hiking registration fees of all old vehicles, in the name of bringing down air pollution!
Looks like the main aim of the government is not to bring down air pollution but to make money looting middle class and poor so that it can continue to enjoy its own “ache-din!”
It would be great if the government brings out a similar scrap policy to phase out all politicians above 60 years or have already completed 15 years in politics; please make them retire compulsorily on the lines of other government employees, for the betterment of our country’s future. This is the need of the hour. Jai Hind!
—Jerry Fernandes, Saligao

UNFAIR GOVERNMENT!
THE Centre is going to impose a hefty increase in registration-renewal fee for “old” vehicles ( 15 years and older)? Ostensibly, because their emission norms become out dated? It is not a fair decision for it must be stressed that not all old vehicles are the same.
Saving the environment is good but such blanket rules are bad. If a vehicle meets emission norms why shouldn’t it continue to run? Quick disposal of vehicles may line government’s coffers but it will be just be bad if not worse for the environment. A buy-and-trash culture is overtaking the world and this is why the environment is suffering in the first place.
Instead of buying good quality which will last for years, people are buying cheap China-made goods and replacing them annually! Now India wants to encourage this attitude. Without realizing that often a family car has sentimental value for your typical Indian family. If a car is working fine, meeting norms, why should the owner be forced to scrap it and buy a new one? Only car manufacturers and government will rake in more and more money with every transaction!
Consider that many old vehicles have not only very strong engines but also a robust superstructure with side doors reinforced for accident impact. New vehicles are lighter, not as robust — completely smash-able in high speed impact accidents. Phasing out old vehicles should be done only if vehicles which are not road worthy.
A blanket law like this one will hurt the common man more. This government is cruel and has no common-sense!
—Stephen Dias, Dona Paula

REGARDLESS of which political party is in power we should commend the good things done by the government. But never ever hesitate to severely rap them for their acts of omission and commission. There should be no room for political sycophancy as we need to fearlessly and bluntly point out and highlight any and every illegality committed by those in power and authority.

We should never be spineless. Our inaction in not speaking out is a great disservice to the society whose wellbeing should always be our concern. An effective and very vigilant Opposition is necessary to provide checks and balances in the working of any government.

A very strong opposition is fundamental for the success of any democracy as no Opposition or a decimated one is precarious. Without an effective Opposition the government of the day becomes dictatorial, arrogant and unaccountable, while functioning in rank violation of law and the fundamental constitutional principles. Those we elected should serve us with dedication and humbleness, never ever becoming power intoxicated.

Let us always be reminded that “Power corrupts and absolute power corrupts absolutely” and that “The road to hell is paved with good intentions.”

SEROPOSITIVITY AND ITS USE

FINALLY, the State Expert Committee head, GMC Dean, disclosed the results of a sero-positivity survey conducted by the GMC. He says 70% in the age group 1-18 years got infected. Congratulations. They must not give up their authority.

In August, Prudent reported the BJP medical spokesperson  saying that 66.6% in the age group 5-17 years had antibodies. This was proved in a survey conducted by the IDSP(Integrated Diseases Surveillance Programme) of Goa DHS! So, we have two  surveys? But the GMC Dean admits that only a small sample was studied.

For this reason, even those infected in Goa are vaxed after a certain interval. Once again: opening up must have certain measures in place including ventilation, and observing of proper masks. This must be monitored for even professors are seen removing their masks because they have got their vaccines. Masks are to protect others. Importance of self-testing must not be left out.

Follow Singapore, don’t take shortcuts. Note that Mumbai conducted five sero-surveys. In the fourth one in August they found antibodies in only 51% in the age group 6-18 years. We know the level of infections there especially in the compromised slum areas. Goa is 70%? We need to validate the data and methods used.