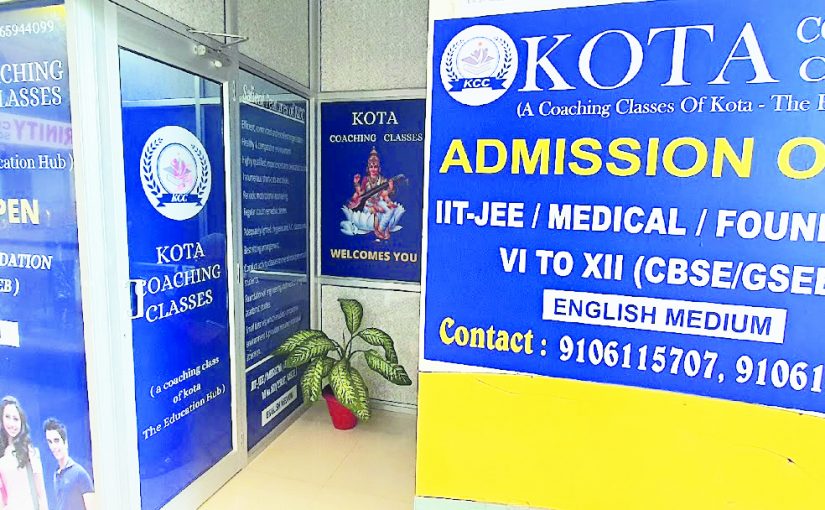 The introduction of Common University Entrance Test (CUET) by the Narendra Modi government has led to students dropping out to join coaching classes. This way they can focus only on the subjects they need to get into medicine or engineering – and ignore the other subjects.

While private school students are dropping out to enroll in crash courses for CUET, those who cannot afford these coaching classes feel they are at a disadvantage.
Alarm for Class 12 board exams, that lived rent-free in the minds of students, has now been replaced by the rush to enroll in expensive crash courses to prepare for the Common Universities Entrance Exams (CUET).
Introduced in 2021, CUET is a single-window entrance exam for admission to undergraduate programmes offered in any of the 45 University Grants Commission-funded central universities across the country.
Amitendra Kumar, the product head of CUET at Career Launcher, says the chain of nationwide coaching institutions gets at least 200 calls every day which are inquiries about CUET courses. A “few thousand” students have already enrolled in the crash courses which cost anywhere between Rs 35,000 to Rs 70,000, he adds.
“I am getting requests from parents to withdraw their wards from the school. They say since Class 12 marks will now only hold 40 per cent weightage, they want to enroll their students in open schools and have them focus on CUET coaching instead,” said Sudha Acharya, chairperson of the National Progressive School Conference (NPSC), an association of 122 Delhi schools.
Government school students, on the other hand, are worried that inability to afford CUET crash courses may affect their chances of getting admission into a good central university for their undergraduate course.
‘Customized packages’
Coaching centres launched crash courses for students appearing for the CUET this year within days of the UGC’s announcement in March about the change in the admission process for undergraduate courses in central universities.
At Career Launcher, there are three types of CUET crash courses: online, offline and pre-recorded video lectures. While these courses cover 14 domain subjects ranging from science, humanities and commerce, students can also opt for a ‘customized package’ with subjects of their choice.
“We have started crash courses for students appearing this year, a year-long course for students appearing in 2023 and another batch for students appearing in 2024,” Amitendra Kumar, product head of CUET at Career Launcher, told ThePrint.
Aakash, the nationwide chain that offers coaching classes for NEET\JEE aspirants, is now offering a 24-day crash course for CUET covering only science. “Our test series courses will start from 6 June wherein students will take 14 tests. This can be availed online and offline,” said Anurag Tiwari, national academic director (Medical) at Aakash+BYJU’S.
So far, 100 students have enrolled in CUET courses at Aakash, which cost anywhere between Rs 20,000 to 30,000. More enrollments are expected once Class 12 exams end.
Even Ramanujan College, affiliated with the Delhi University, launched a CUET crash course, charging Rs 12,000 per student. A decision it later withdrew.
“We had to pull down the coaching session because several professors from other colleges raised objections to it. However, we had the best intentions at heart and wanted to give students training at affordable prices, as compared to private coaching centres,” said S.P. Aggarwal, principal of Ramanujan College.

‘Conceptual learning no more focus’
But the mushrooming of CUET crash courses is a worrying trend, says Sudha Acharya.
“Students are no longer working hard for their term-2 exams, since they have already already performed well in their term-1, and their overall percentages will be good anyway. Since CUET is MCQ-based, skills like conceptual learning, presentation skills and creative expression of students will not be the focus anymore,” she told ThePrint.
For students from government schools, the stiff competition for college seats has only intensified with the introduction of the CUET.
A government school student, who did not wish to be identified, said that he worries that even if he prepares from his school textbook, he will not have an edge over his more privileged contemporaries.
“I will try my best to find free material for reading and practicing but how do I compete with their hours of practiced paper solving skills? Isn’t it obvious that they will score better than me? How is this new system a level playing field,” he asked.
“Till last year, my daughter thought of DU as unattainable because of high cut-offs and now it will be so because I do not have enough money to put her in a coaching class,” said Neetu Devi (40), the mother of a Class 11 student.

CUET pattern
The National Testing Agency (NTA), that will conduct the CUET, has said that questions for the entrance exam will be from Class 12 NCERT textbooks.
The CUET paper will be divided into three parts.
The first section will be a language test, for which students will have the option to choose one of 13 languages — Assamese, Bengali, English etc. Questions will be based on reading comprehension, verbal ability, and grammar, among others.
For the second section, students will be required to answer questions on one to four domain-specific subjects, such as accounting, bookkeeping, history, economics or geography.
The third part will have two subsections, with the first involving a general test for vocational and open eligibility programmes, where students will be tested on their general knowledge, awareness of current affairs, general mental ability, and logical and analytical reasoning. The second sub-part will be an additional language test, for which students will be tested on their knowledge of one of 13 languages.