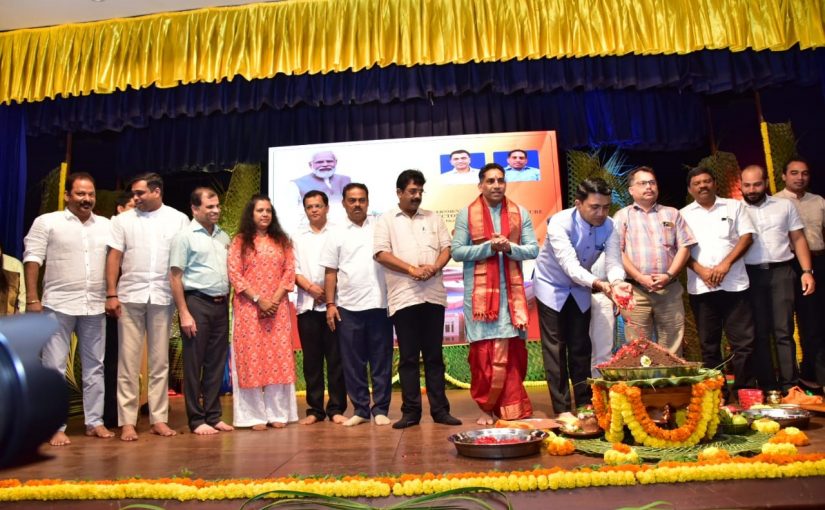 A BHOOM POOJA FOR NEW PARLIAMENT BUILDING IN DELHI: An auspicious Shravan pooja was held at the Institute Menezes Braganza main hall on July 29, 2022 and speaking on the occasion, Chief Minister Dr Pramod Sawant praised Prime Minister Narendra Modi for the initiatives he has taken to pave the way for India to be superpower. He said a new Parliament was needed to keep up with changing times and technology, and soil from every nook and corner of the country for its construction represents the aspiration of countless Indians. Goan soil would go towards the building of the Central Vista Re-development Project for the new Parliament Building in New Delhi. Present on the occasion were Minister for Art & Culture, RDA, Sports and Youth Affairs Govind Gaude who welcomed the gathering, Minister for Social Welfare Subhas Phaldessai, Minister for Fisheries Nilkanth Halarnkar, MLAs, Jennifer Monserrate, Joshua D’Souza, Dr Chandrakant Shetye, Ganesh Gaonkar, Jit Arolkar, CCP Mayor Rohit Monserrate, State BJP President Sadanand Shet Tanavade, NRI Commissioner Narendra Sawaikar, Subhash Chandara (Secretary-Art and Culture), Sagun Velip ( IAS, Director, Art and Culture) and other dignitaries and officers of the government of Goa.

ON Monday, July 25 motorised canoes netted tonnes of the prized solar prawns. However, only a single fishing agent was available to procure the same. Reportedly an estimated 20 tons of prawns had to be discarded for want of ice/storage facilities or purchasing agents. This is a criminal waste of precious food with SC judges observing this week that no one must die from hunger!

It’s a reality that many people are tightening their belt to deal with hunger and their family’s needs. The Disaster Management Committee should have attended to all the dumped sea food. Where was AAP MLA: this happened in his backyard!  Hotels should have collected and stored the dumped fish and prawns, blast frozen them with a fee for the fishermen. Do they know about how fish can be refrigerated and transported long distances for sale and that they are refrigerated transport vehicled? After blast freezing these vehicles could transport the same to the fish exporters.

Why were agents not at hand? Sadly, our 40 MLAs do not know to administer, they only know how to point fingers at each other to show that only they are good. What is use if AAP merely raises questions! What is the result!

OVER the last four decades I have taken up various causes, in an attempt to play my little part in raising a voice against injustice and illegalities. This long voyage of struggling against the powers to be, brings nostalgic memories of the 13-day 1979 student agitation that Goa witnessed for 50 % bus concession. Within days that struggle spread and engulfed across the State and the student community brought the government to its knees to agree to our very reasonable demand. The rest is history.

But last week the raising of the issue of the illegal  Silly Souls Café and Bar at Assagao, allegedly being run by Union Minister for Women and Child Development Smriti Irani’s family, has been an enriching experience that was unexpected. The issue within a day or two became a matter of interest across the nation and our fellow Indians across the world.

This has been a very strenuous one to pursue but it was heartening as it resulted in the making of so many new friends across the nation. Never expected that so much concern over this illegality would have so spontaneously erupted. It was comforting to see that people care for the rule of law and are concerned about abuse of political power and patronage.

Raising any issue is a cumbersome task due to the backlash one faces and this has not been an easy one. But all said and done there are no regrets. Yes, it was not a silly move to hunt this unholy Silly Souls Café and Bar.

In the end, I must trust God to protect me, for it is He who has been my guardian and witness.

A GROUP of eight police personnel who had got together for a dinner party to celebrate “Gatari” — to indulge in unlimited booze ahead of the Shravan month —  were recently reported and suspended for the dadagiri of refusing to pay their Rs8,000 food bill after gorging on a spread of prawn/chicken starters and alcohol. They created a ruckus, threatened the staff of an upmarket restaurant at Sangolda and a complaint was filed by its owner along with CCTV footage of the said incident.

Unfortunately, no FIRs has been filed as yet. Why doesn’t Goa Police take legal action its errant colleagues when they have no problem hauling in innocent protesters and putting them in jail? Today, cops, inspectors and constables alike, are openly seen misusing the authority of their khaki uniform, posing like big Singhams (famous character from popular Bollywood Hindi movie) and enjoying their own ache din by habitually flexing their muscles – especially when it comes to soft targets and that too on a regular basis.

In fact, cops are not just seen extorting money from those selling drugs, those running prostitution centres, harassing young couples roaming around on beaches, blackmailing married women on flimsy grounds but are also seen demanding free complimentary services from owners of roadside eateries of gadda,  kiosks, bars and restaurants, etc. The reason for doing this is because they know that even if the higher ups of their department come to know about their misdeeds they will be maybe just suspended for a while (without holding back their monthly salaries) later  reinstated in service.

Didn’t the Goa police reinstate the cops from the narcotics cell who were suspended for supporting and for being allegedly hand-in-glove with some of the most famous drug peddlers from the coastal belts of north Goa a couple of years back in Goa?

As long as higher officers of the Goa Police do not dismiss such rogue cops from service, keep protecting them with mere suspension and later reinstatement, nothing is going to change in Goa. Police goondagiri will continue.

HOW soon we forget. It is important to note that no less than 490,000Indians were paralyzed by polio shots between the years 2000 and 2017 (and many more before that, as I witnessed myself when 60 babies ended up in hospital in Kolkata with “spinal menengitus” right after a polio vaccine drive back in the nineties). This was the common ruse used from the beginning, way back in the sixties in the US, when they labelled polio as “spinal menengitus,” when many people got polio from the shots, because it has similar symptoms to  polio. It is time to wake up folks, Please pass this information on and save a few lives before the full truth comes out about all vaccinations.