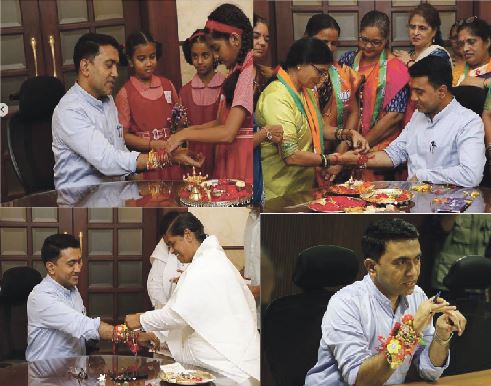 AUGUST 12, 2022, IT WAS RAKHI BANDHAN TIME FOR CHIEF MINISTER PRAMOD SAWANT: Schoolgirls, women, Brahma Kumari sisters, all came to tie a rakhi which is symbol of a brother’s love, affection and protection for his sisters in good times and bad times in Hindu tradition! Rakhi Bandhan is one of Hindu society’s evergreen and much loved observation widely observed and cherished.

ON August 12 we observe the death anniversary of Goa’s first chief minister,  Dayanand Bandodkar. He assumed office on December 20, 1963 and continued as chief minister till his sudden death on August 12, 1973. His funeral procession from Alhinho to Miramar beach was a sea of humanity.   Affectionately referred to by all as “Bhausaheb” he was undoubtedly the best chief minister Goa has ever had!

Dayanand Bandodkar may have initially been for the merger of Goa with Maharashtra, but he respected the people’s verdict in that 1967 Opinion Poll and toiled with a vision and passion towards the all-round development of Goa. As a friend and carer of the poor, with a vision, laid a sound foundation for Goa’s progress.

Unlike many of today’s self-centered politicians Dayanand Bandodkar relentlessly raised and pursued issues concerning the backward, down-trodden, and neglected communities. Leaders of his kind of integrity, honesty and commitment, would be rare to see in today’s shoddy arena of political pygmies. He dared to speak from his heart and always walked the talk. Only a few such politicians still remain in our midst and will also be remembered for the good they did.

It is so very distressing and agonizing to witness the continuing rampant destruction and devastation of Goa. With  hills and fields fast vanishing, our State is sadly getting further disfigured beyond recognition. It should have been the endeavour of those in power now to at least salvage and safeguard what remains of Goa.

Our youth need to be made aware of the very rich and invaluable contribution to Goa by our first Chief Minister Dayanand Bandodkar – he can never be a forgotten hero!

THE Goa Police should be congratulated for finally cracking down on drunken driving very seriously as part of a special drive in the state. For rightly  penalising those who are still drink and drive carelessly and dangerously.

Unfortunately, some people instead of appreciating the efforts of our Goa Police are currently heard grumbling and  blaming the poor condition of roads, non-functioning street lights, no proper signals, etc, for Goa’s high incidence of road accidents.

What they are saying is true but I still believe that 95% of road accidents occur  mostly due to drunken driving and also because of the easy availability of alcohol every few metres throughout the state of Goa. Drinking is a way of life in Goa and nobody takes it seriously.

Some Goans think that it’s their fundamental birth right to be drunk while driving and risking the lives of others. Many may even attend weddings, private lunch/dinner get-togethers, etc, not for a decent buffet meal but to spend some special moments with their close friends/loved ones and to get high on alcohol and act/behave like cartoons!

Hey, let’s face it. Alcohol does not make a drunk person driving a vehicle any smarter but it practically forces him to drive recklessly like an uncivilized idiot. Therefore I personally feel that the cops from the traffic cell, ignoring the views of all the “bhevdas” or drunkards of Goa, should continue with their drive to crack down on drunken driving and in fact extend the rules around the clock for 24 hours.

Please penalise everyone and anyone who drinks and drives. Our roads will be safer and there will be fewer accidents.

THE Centre has rejected Goa’s application for a medical device park despite having a number of pharma companies. Why? The way the centre BJP, the governor and the local BJP, have been making moves to convert the entire Goa into a tourism hub, it is no wonder the proposal has been rejected. The BJP has decided that Goa must only cater to tourists a la Bangkok so they will not promote manufacturing units in Goa. Why?

Because several BJP leaders have properties in Goa that can generate revenue only from tourism. Goans have no say in the matter because everyone seems sold to hinterland tourism. The Sagarmala Project has one objective: hand over jetties for tourism and marinas: again, all for tourism only. All these tourism-related projects are on a fast track to earn money for BJP leaders today: Goa will have nothing to fall back on a rainy day.

Future generations will be left to clean up the mess. Goans need to take control of what they want, not what BJP leaders want. Panchayats must pass bye-laws: no tourism related businesses without STPs, Police outposts, water and electricity to all Goa and employment to locals only. A white paper showing the current employment of Goans vs migrants in existing tourism units must be obtained.

THIS is to remind the newly formed panchayats of the immediate tasks at hand:

These are the basics for reviving  tourism, quality of life, economic recovery and business continuity for the villages.