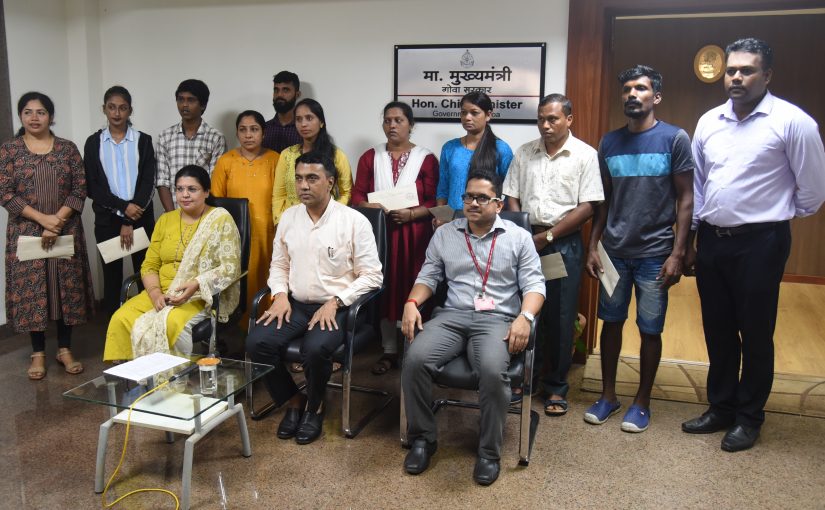 GANESH CHATURTHI JOYS: A happy Chief Minister Pramod Sawant handed over job appointment letters to beneficiaries of the government’s Compassionate Scheme. The scheme entitles dependents of government officials, who lost their lives while on government duty, to jobs in government service. While handing out the letters the CM asked the beneficiaries to work to the best of their abilities. He also spoke about disbursement of monetary aid under various welfare schemes of the government and wished all a happy Ganesh Chaturthi festive season. Present at the function were Joint Secretary (Personnel) Meghana Shetgaonkar, who said other pending applications under the Compassionate Scheme are being processed; Under Secretary (Personnel I) Eshant Sawant, and Under Secretary (Personnel II) Nathine Araujo and other government officers.

THE government plans to install CCTV at major intersections, accident prone zones and other public places, to monitor vehicular movement. First of all, if there are accident prone zones then it makes sense to rectify these zones first and make them accident free. Before entertaining morbid thinking of fitting cameras there! The government keeps on saying that they will get the industry to fix these CCTV cameras under CSR- CSR but can this be done in such a case?
Finally, we know that CCTV cameras were already installed at many places at the cost of taxpayers, but they do not work, for who maintains them? This government cannot maintain costly equipment but can continue to replace the same with new equipment – all because it can continue to tax people for funds. Sadly, AAP and RGP are now firmly on the side of the BJP — otherwise they would have disclosed all the data of past CCTVs by now, in particular what the value of the scrapped cameras is and who pockets the money.
— R Fernandes, Margao

GOOD NEWS FROM BENAULIM!
AFTER many years Benaulikars were able to do “visarjan” of Ganesh idols at Voddlem Tollem. As per Aam Aadmi party MLA Capt Venzy Viegas of Benaulim constituency’s promise, he had got the pond and its surroundings cleaned up and provided safe access, along with other facilities, to ensure a clean and safe visarjan for Ganesh idols. So we can say Ganpati Bappa Morya, Phudchya varshi laukar ya!
—Sai M, Goa

MANIPAL HOSPITAL TRAPS
IN recent years almost every patient I have known who has been to Manipal Hospital at Dona Paula has faced a hell of a nightmare. Most of the patients have landed up in the morgue, with their families lumbered with extremely exorbitant bills. For the family of someone already going through the pain of illness, it is added agony to be financially ripped off with very inflated bills. This anguish faced by family members is heart-breaking when collecting a dead body after paying a huge bill which will land them in a deep financial hole.
Manipal hospital seems to be lacking any code of ethics. A concern for the wellbeing of the patient is never there, while they merrily secure and purse their commercial interests. The government ought to order an immediate enquiry into the dubious affairs of Manipal hospital and the probe has to zero in around the main accused Dr Shekhar Salkar, who runs the commercial show there, by claiming that he is a qualified oncologist, although he is not one. He has neither degree nor even a diploma in oncology or onco-surgery.
Recently, my 85-year old pious gentleman and close friend from Ribandar escaped from being butchered by Dr Salkar who was all set to operate on my friend who had a growth on his intestine. Luckily, my friend smelt a rat in time and sought discharge within hours of his admission there. He sought immediate alternate medical advice and is keeping well after being successfully operated elsewhere.
Dr Shekhar Salkar has been grossly misusing his position as Head of Goa BJP’s Medical Cell to illegally and unethically rake up huge financial benefits for Manipal hospital while also enriching his own pockets. On Dr Shekhar Salkar’s trail of scams at the Goa Cricket Association the less said the better. But he should not be allowed to immorally gamble with people’s lives.
There is abundant documentary evidence to the effect that the politically well-connected Dr Salkar has been unduly interfering and sabotaging the working of government hospitals as well, only to benefit his Manipal hospital. Will Health Minister Vishwajit Rane order a prompt thorough inquiry into the blatant misdeeds and wrongdoing going on at Manipal hospital, including the financial exploitation of patients?
Manipal hospital is the proven vulture hospital of Goa,not to mention the financial ordeal and trauma relatives have to go through after losing a loved one.
—Adv Aires Rodrigues, Goa

GOVERNMENT SHOULD CLOSE FOR A WEEK?
THE State government officially permits a two-day public holiday every year to its employees in different departments on account of Ganesh Chaturthi festival in Goa. Unfortunately, most so called government servants (from higher officers to clerical staff to peons) do an annual bunk from work following the two-day official holiday allowance and stay at home for a week on casual leave – without even putting in any leave applications! This results in total breakdown and functioning of government departments in Goa.
The BJP government gives big and tall lectures to everyone about the importance of work ethics, especially on Gandhi Jayanti Day every year, but never takes action against its own staffers bunking work for the long Ganesh Chaturthi festival. Why?
It would be better if the government recruits mixed staff from all the communities equally and fairly so that government offices continue to function during various festival times. Otherwise shut all government departments at least for a whole week during the annual Ganesh Chaturthi, instead of fooling the general public and forcing the public (including senior citizens) to make frequent trips to empty but running government departments where just a handful of token staff time pass and no work is done anyway.
Despite all this unprofessional behaviour in government offices I wish all my fellow Goans a happy Ganesh Chaturthi!
—Jerry Fernandes, Saligao