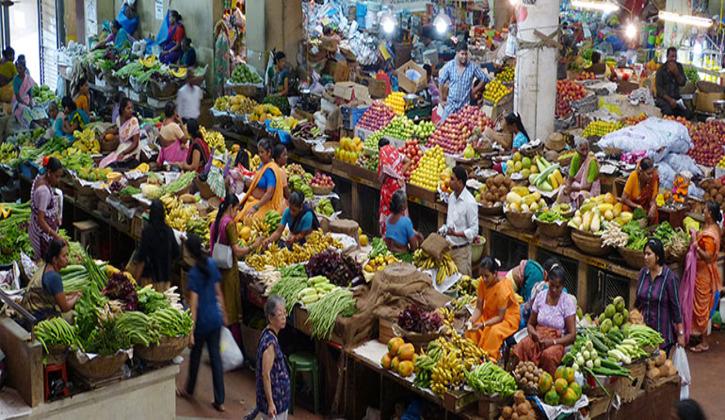 BOOMING: The prices of day-to-day food are going up more rapidly in the market. Eating out is becoming costlier for prices have increase by 25 to 40%.

The formula for dealing with the huge increase in prices is to buy less at cheaper prices. May be we should be greatful that unlike in New Zealand tomatoes are still not priced at Rs1,000 kg yet in India.

The Plight Of Poor
Roadside small tea and snacks vendors are reeling under rising input cost prices but have not been able to increase price of their end products, fearing an impact on business, which has already been severely impacted by Covid. Raja Kumar who has a small samosa-kachori van in East Delhi is struggling with rising input costs. “Sab cheezon ka daam badh gaya hain, tel maida, besan, gas. Har cheez ka daam badh gaya hain. Lekin humara koi bhao nahi badha. Bohot mushkil ho raha hain, lekin ab kya kar sakte hain (Everything has become expensive – oil, flour, chickpeas flour. But my prices have not gone up. It is getting very difficult, but what can one do)?” Kumar said.
The biggest blow has been from rising fuel prices. Prices of petrol and diesel have seen price hikes to the tune of Rs 10 per litre each in the last one month by oil marketing companies. A delivery person, who did not wish to be named, said that the company he works for does not reimburse him for the oil used for delivering products. He drives across Delhi for delivery and has to pay his oil bill out of his pocket.

Retail inflation rises to 6.95% in March against 6.07% in February
Dhiraj Kumar, who works as a security guard in a society in East Delhi, now runs his scooty with half a litre of petrol on every refill compared to one litre earlier. The average salary of a guard in Delhi is around Rs 12,000 per month. This class of workers is often employed through a contractor who takes commission from the overall salary in the name of the employee. Their salaries grow only once in about three to five years and in high inflation years like the one India is facing currently, they are the worst sufferers.

Middle Class Woes
Homemaker Sunita Sharma is feeling the pinch of successive hikes in the price of piped natural gas in the last few months. “We had switched from a gas cylinder to PNG the moment we got a chance, hoping that this would reduce the burden, and it did initially. But now the rates are almost at par. How is this monthly rise in prices helping a middle class family? How do we make things work? Do we cook less and eat less? The only respite we receive is during elections, I wish the elections would continue throughout the year,” said Sharma.
As input gas costs increased, Indraprastha Gas Limited (IGL) on Thursday announced a hike in domestic piped natural gas by Rs 4.25 per standard cubic meter. PNG would now cost Rs 45.86 per unit in Delhi and Rs 45.96 per unit in Noida, Greater Noida and Ghaziabad. Gurugram would have to pay Rs 44.06 per SCM.
Ritu Jain, another home maker in Delhi’s Mayur Vihar is cutting down on non-essential expenditure to make ends meet. The rising prices of everything from oil to biscuits have forced her to convince her (12-year old son) to not ask for anything other than essentials for a while. “He just started going to school after such a long gap. Naturally, he had lots of demands of going out with friends, eating out, watching movies, the things kids of this age do. I have convinced him that all that would not be possible now. Mine is a single-earning household. And salaries have not increased adequately to make up for rising costs. Bohot mushkil ho raha hain (it’s getting very difficult),” Jain says.
Household budgets are getting difficult for people to manage as essential commodities like vegetables and FMCG products have seen a sharp rise in prices. In March, CPI inflation in oils and fats was 18.79 per cent, spices 8.5 per cent, vegetables 11.64 per cent, and meat and fish 9.63 per cent. As commodity prices have been impacted by the Russia-Ukraine war, FMCG companies are expected to go for 10-15 per cent price hikes to cover costs. Companies like Hindustan Unilever and Dabur have reportedly opted for price hikes already.
On the other hand, most people in the salaried-class are yet to see any significant hike in their annual packages. While startups and IT companies are certainly paying more to their employees to control attrition, they employ a miniscule number of India’s workforce. Recent findings by the Michael Page Salary Report 2022 show that salary hikes this year in corporate India are expected to be around 9 per cent. This would not be enough to take care of the price rise as most essential commodities along with fuel are seeing double digit inflation. The pandemic impacted jobs and resulted in massive salary cuts across sectors. And with rising inflation and incommensurate salary hikes, India’s middle and lower middle class families are the silent sufferers.

Compromise With Quality & Quantity
Community social media platform LocalCircles in a recent report found that about 30 per cent households in India have switched to cheaper alternatives for edible oil alternatives as well as unbranded ones in the past year to due to the high volatility in cooking oil prices. “Rise in prices of edible oils is forcing some of the low- and middle-income households to opt for cheaper and low-quality oils,” the report said.
“We don’t sell unbranded oil but we have got lots of queries on unbranded cooking oil from small retailers. Branded cooking oil prices have shot through the roof. Retailers are asking for it means customers must have wanted unbranded oil,” Ajay Aggarwal, who has a wholesale shop in Laxmi Nagar, says. The war has impacted the supply chains for sunflower, soyabean, and palm oil, due to which experts say that domestic edible oil prices have risen by 25-40 per cent in the last month.
Another impact of inflation has been reduction in the size of FMCG products. Since FMCG companies know that increasing the price of their small ticket products will lead to fall in sales, as a strategy they have reduced the quantity of product in their smaller packs. So the customers will continue to get Rs 5 shampoo-sachets, but the quantity will be less.
This is primarily the reason why FMCG companies, despite having reported growth in their revenues, have reported drop in sales volumes over the past two quarters.
The Q4 2021 quarter saw 9.6 per cent growth for FMCG sector in India based on the double digit increase in prices for three successive quarters, according to consultancy firm NielsenIQ. But the industry reported a 2.6 per cent decline in overall consumption in the country.