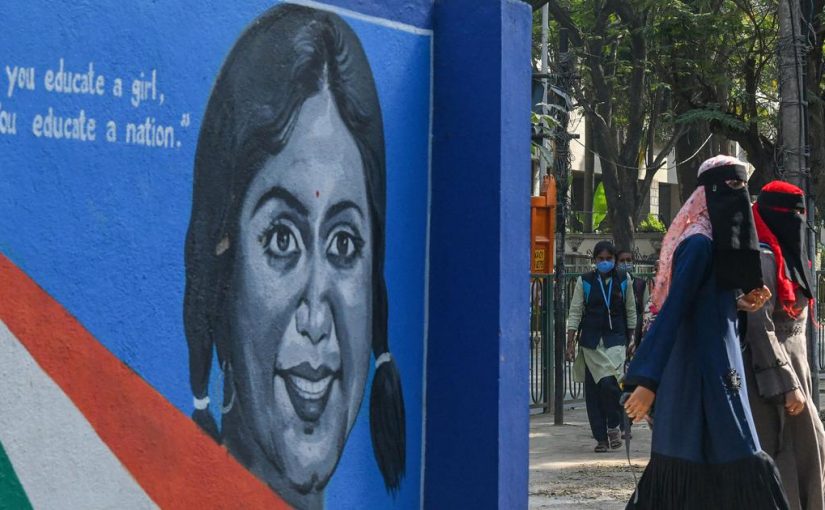 The Supreme Court on September 22 finished hearing arguments in the case of the Karnataka hijab ban. The proceedings stemmed from multiple challenges to the decision of the Karnataka High Court which had upheld a government order barring the wearing of the hijab by female students in colleges and in schools in March. The Supreme Court has reserved its decision on the matter.
The question that the Supreme Court is dealing with may be loosely framed as follows: whether the wearing of the hijab could be allowed in public institutions, irrespective of the fact that these institutions prescribe a particular dress code or not.
Two notable interventions by the Supreme Court stand out so far – could a violation of the dress code be allowed, and can’t the hijab in a classroom be seen as a sign of social diversity?
Additionally, there have also been multiple mentions of the essential religious practices test, which seemingly might not find much ground in the present case. The test has received criticism from all quarters, especially for the notoriety it brings in the judicial verdict.
While it is true that the Supreme Court must not entertain interpretation of the religious texts, it remains equally relevant that it shows reverence to the tradition of the faith. I have argued earlier that the splitting of the religion into the binary of “faith” and “belief” might bring disastrous consequences, especially for the religions which are inherently communitarian.
Islam is a public religion. The proclamation of faith is in itself a public act. A mere belief in the unity of god and the message of the Prophet is not sufficient. It needs to be proclaimed so as to have an outward projection of that faith.
In essence, therefore, Islam is a religion of both memory and action. The belief and the faith must both coincide to bring out the Muslim identity. All forms of religious obligatory worship testify to this method – shahadat (proclamation of faith), namaz (congregational prayer), zakaat (charity to the poor), roza (month-long fasting) and haj (annual pilgrimage). The individual aspect of namaz, especially, is seen as an exception to its communitarian value, within the larger corpus of the religious tradition.
The Muslim faith gives rise to a Muslim identity that is public. To claim that this is a radical argument is unwarranted, for all the other religious identities are celebrated in public space too. Religions are both lived and celebrated through rituals that are symbolic of the communitarian identity. The religious identity is manifested in individual actions but gains its meaning through the tradition of the faith and its practice.
If that be the case, which is also the Indian situation, the public space can never be devoid of religion. It can remain “secular” as long as it allows the social manifestations of this diversity among the religious identities. In its political manifestation, the public space can always avoid any attachment with the religion. However, it does not mean that every social action must be viewed from political lens.
The question of individual appreciation and adherence to a religious tradition remains another essential component of the debate. To what extent my practice of the faith gives meaning to its tradition is an important question.
In its usual context, the religion is dictated by an individual’s preferences, context and the meaning she outlines for her religious belief system. However, that understanding in no sense gives rise to a communitarian value which the religious adherents search for collectively in any faith tradition.
This means that the expression of faith may hold value for an individual in one instance but may not hold any ground as part of the tradition. In such instances, the practice of the individual may be allowed as part of her freedom of expression, but may not hold any projection for the profession of faith, as understood collectively.
The individual praxis of religiosity without doubt remains an essential criterion to understand the religious faith. However, in instance where the faith by its very definition is communitarian, personal choices of individuals cannot define its religious boundaries. The faith must always be appreciated through its tradition.
When the Indian Constitution talks about the collective life of its people, it brings out an important element of togetherness through fraternity. The concept is a loaded one – while it envisages the collective constitutional identity for all of us, it also argues for the celebration of a social fabric with all its diversity intact.
Essentially, it also encompasses a bigger ideal – that our common public space may not always be political. The social must in all senses define our togetherness and for that to happen, the celebration of diversity in public space is essential. The identity of religion is just one of its forms. This is the lesson that the court, while delivering the hijab verdict, must also take home.
Nizamuddin Ahmad Siddiqui is Assistant Professor at Jindal Global Law School, OP Jindal Global University, Sonipat.