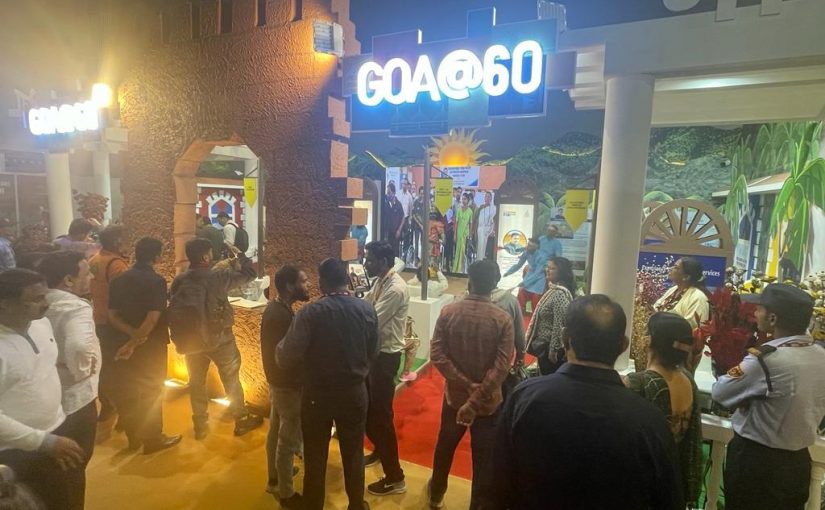 AT THE 41ST INDIA INTERNATIONAL TRADE FAIR, NEW DELHI:  Visitors are lining up to take a look at the Goa Pavilion at this important trade fare which commenced from November 14, 2022 and will be on for 14 days. More visitors are expected attracted by the participation of artisans attached to the Department of Handicrafts, Textiles & Coir — who are doing brisk sale with sale of products. The theme of IITF is “Vocal for local, local to global.” The  overwhelming response is also because of the  performing artists from Goa, attached to Kala Sangam, Priol, performing daily to enthral the visiting public with Goan traditional  folk “divli” or lamp dances, Dhangar and Veerbhadra performances. Prime Minister Narendra Modi in his message has praised Chief Minister of Goa Dr Pramod Sawant for his vision, dynamism and able leadership in initiating Swayampurna Goa (Marching towards self-reliance) and working towards achieving the goals set under Swayampurna Goa (in accordance with Atmanirbhar Bharat campaign). Other aspects of Goa’s achievements, initiatives and strides in various fields are also highlighted through different modes of communication such as print and electronic at the Goa pavilion. Incentive packages are also offered to investors with an invitation to come to Goa to explore business opportunities.

THE Prison Ministry India (PMI) inaugurated the 13th National Convention deliberate upon the theme of  “Reform to Reintegrate” from November 16 to 18, 2022 at the St Joseph Vaz Spiritual Renewal Centre, Old Goa. In his presidential address His Eminence Felipe Neri Cardinal Ferrao called on PMI volunteers to invest time by listening, appreciating and loving the prisoners to enable them to reach their self-actualization and enjoy true redemption.

He commended the volunteers of the PMI (Goa Unit), who are celebrating the silver jubilee of their passionate service of Christ Jesus in the Goa prisons. Cardinal Ferrao recalled that the patron of the Archdiocese was a prisoner in Sri Lanka and it would be right to call him the Patron Saint of Prisoners in India.

Keynote speaker Bishop Alwyn D’Silva (chairperson of the PMI) cited that six lakh prisoners lingered in the prisons of India and this is not just a number but  immense expression of pain and agony of their parents and families. When the world does not recognise prisoners as citizens, he said, the over 8,000 PMI volunteers serving in the 1,350 prisons of India, is an  attempt to reform the prisoners to re-integrate them in  society for their integral human development.

Chief Guest Judge Desmond D’Costa, Member of the Human Rights Commission, in his inaugural address recalled his days as the district judge in Goa where he had directly witnessed the exemplary service of the prison ministry volunteers to help prisoners tide over their stress and struggles of daily life in prisons. Judge D’Costa stated that prisoners are often the worst victims of violation of their fundamental rights. He emphatically confirmed that a prisoner continues to be a human being, a natural person and a legal person and so conviction does not make him/her a non-person.

Fr Francis Kodiyan, the PMI National Coordinator, felicitated dignitaries and welcomed the 458 delegates from all over India for the convention. He reminded the delegates of the PMI spirituality that “inconvenience should be the convenience of every PMI volunteer” and hence as members of this ministry we have to carry every constraint in prayer. He urged every delegate to be creative and energetic in the service of the ministry.

Pope Francis message was also presented and he praised the volunteers for taking are of the spiritual and material wellbeing and dignity of our incarcerated brothers and sisters with equity, compassion and fraternal solidarity, for to serve those in prison is to serve Jesus himself.  Fr Wilfred Fernandes (PMI central regional coordinator) read the message of the Apostolic Nuncio and David Fernandes (PMI Goa state coordinator) proposed a vote of thanks.

All this is for the information of the general public to take cognizance of our brethren and sisters in prison.

WHY has the state government still not published a White Paper of the recently much promoted Mega Job Fair in Goa? The Dr Pramod Sawant- led BJP government had organized a huge  Mega Job Fair at the Dr Shyama Prasad Mukherjee Indoor Stadium, Taleigao from November 8 to 9, 2022 and after creating a lot of hype by putting up thousands of posters every few metres in public.

Unfortunately, no one really knows how many got jobs and who were finally selected by the companies enlisted in the private sector, the government has not published a White Paper on this after holding such a job mela of huge magnitude in Goa.  Why?

As per my knowledge the owners (most of them non-Goans) of almost all the private sector companies in the state are historically known to recruit only migrants from neighbouring states in large numbers  in their establishments in different parts of Goa. This is not because Goans are less educated or not smart enough to work in their highly reputed companies/establishments in Goa. But because they love making huge profits at the expense of hiring poor migrants for peanut salaries and exploiting them for years on end.

The government should first take strict action against these companies for indulging in anti-Goan  malpractices and then only dream of solving the unemployment problem of Goans in their own state. Organizing these cheap “free-for-all” jumla mega job fairs are along the lines of local feasts/jatra fairs  in Goa!

THE decision to activate the Goa Staff Selection Commission which has been defunct from its very inception is a step in the right direction and about time too. But it needs to be ensured that ministers and MLAs should have no role whatsoever directly or indirectly in recruitment which should be done through a very transparent and meticulous processm with merit being the sole guiding criteria in the selection of every government employee to any post. Integrity would also be a very desirable and necessary attributes if people are to have trust in the system and those serving them, something increasingly lacking of late!

As almost the entire senior bureaucracy is bowing and bending to their political bosses, it would be appropriate for this Commission to be headed by a retired high court judge to ensure that there is no political interference and manipulation in the selection of staff. Integrity of the selectors and transparency in the process must always be beyond question and doubt.

After the BJP in Goa came to power in 2012, we have seen thousands being brazenly recruited into government service, with merit thrown to the winds. All this is reflecting today in the pathetic functioning of our government offices with very incompetent staff being paid with the blessings of their political godfathers!

If we are to attract and retain high calibre quality staff and reap the benefits of a successful recruitment process, then it is imperative that we select staff based on merit and integrity and not on any political or financial inducements or any other bias.

The late Nelson Mandela placed great emphasis on selection criteria with his famous quote ,“My respect for human beings is based not on the colour of a man’s skin nor authority he may wield, but purely on merit.”   –Aires Rodrigues, Ribandar