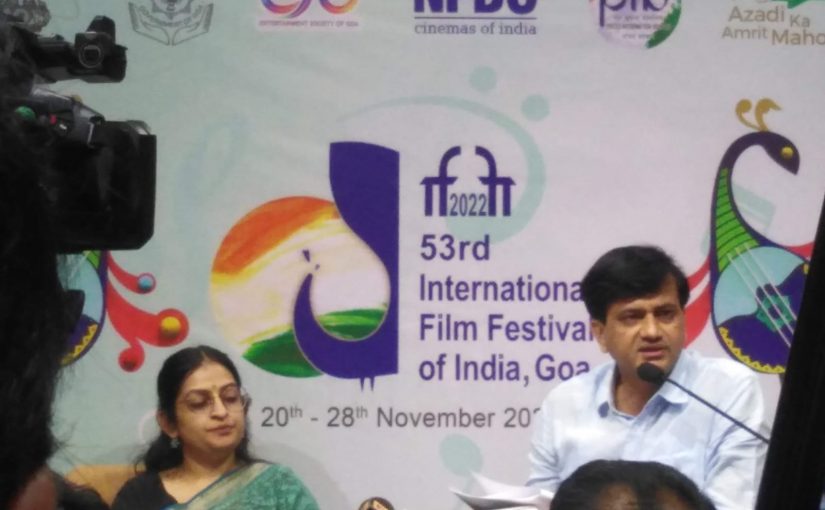 AT THE IFFI PRESS CONFERENCE ON NOVEMBER 17…. Managing Director of NFDC Ravinder Bhakar and ESG CEO Swetika Sachan brief media about the 53rd International Film Festival of India in Goa from November 20 to Novembet 28, 2022.

THE 53rd International Film Festival of India (IFFI) is upon us even before I am really prepared for it this year! This is one time of the year when I look forward to having a filmi holiday with the IFFI films in town. The big changeover is the festival is being managed this year by the presumably more capable minds and resources of the National Film Corporation of India, Films Division and the Entertainment Society of Goa for the first time in IFFI history, although the Directorate of Film Festivals is still playing a role in truncated fashion or so to speak.
Most media people in Goa are already pleasantly surprised when asked to collect their media cards as early as on November 17 this year (three days before the festival rolls from November 20 onwards to 28, 2022) and reportedly there’s going to be 400 plus, plus media people covering IFFI this year, with a lot of national coverage presumably. Announcing details of this year’s first full-fledged post-Covid-19 IFFI Managing Director of NFDC Ravinder Bhakar at press conference held on November 17, 2022 said that they were going all out to make the country premier film festival an outstanding affair this year because it was also part of the 75th Aazadi Ka Amrit Mahotsav celebrations which is also celebrating 100 years of Indian cinema.
According to the PIB brief over 550 media delegates have registered although only 417 applications have been processed so far. General delegates register at about 5,400 delegates and all may look forward to a wide selection of something like 280 films from 79 countries will be screened, as also 180 Indian films and taking all categories together about 500 films for delegates to choose from according to personal preference. Interestingly, 183 films are by women filmmakers. The country focus is France and they have about eight films here.
Opening film is the Austrian “Alma and Oskar (2022) and closing film Krzystof Zanussi’s Polish film “Perfect Number” (2022), the mid-festival film is “Fixation” (2022). Other highlights in the Indian section is a tribute to Asha Parekh with her films “Teesri Manzil,” “Do Badan” and “Kati Patang”; there is also the celebration of 50 years of Manipuri cinema with the screening of five feature and five non-feature films curated by the Manipur State Films Film Development Society in the important Indian Panorama section.
Gala premieres for the first time will feature films like “Drishyam” and “Bhediya” as also new season Netflix web series such as “Khakee-The Bihar Chapter,” “Qala”, “Fauda.” All this and much more. This year the Film Bazar is being further upgraded with more pavilions due to come up at the Marriott Hotel grounds nearby at Miramar beach, this will be on the lines of say major international markets like the one at Cannes.
Most of IFFI will be on physical platform but online platform is there too like last year and delegates may work on their MyIFFI App designed to service online viewers as well as delegates who prefer to catch the films on screen in the various venues of INOX in Panaji and Porvorim. Alas, the Kala Academy auditorium, a hot favourite with many delegates, is out of commission and will be sorely missed. All transport arrangements will be improved upon by road for delegates even if traffic disruptions are the usual bugbear in small state Goa.
There will be the usual Masterclass section with noted filmmakers like R Balki , Kabir Khan, Mani Ratnam and more playing a role. ESG CEO Swetika Sachan confirmed that the ESG has more lined up which would present Goa as a special destination, there would be Shigmotsav and Carnival parades down DB Road and a special section for children, this along with popular film screenings at special venues designated on November 26 and November 27. A 75 poster contest is also under way and not last but least of all Konkani cinema is getting a special platform to showcase its films. So Konkani mogi have something to look forward to too.
On the surface of it there is so much packaged here at an estimated budget of Rs57 crore between NFDC and the government of Goa, but a lot of it is also sponsored, according to the IFFI spokespersons. It’s left to be seen if IFFI this year has taken on more than it would be able to digest and swallow. Especially since even Panaji’s main thoroughfare of the Campal promenade is in an even more state of disarray and injurious to walking (for example, take a look at the inner lanes flanking the areas opposite the Kala Academy where the heritage enclave of independent old villas stand!