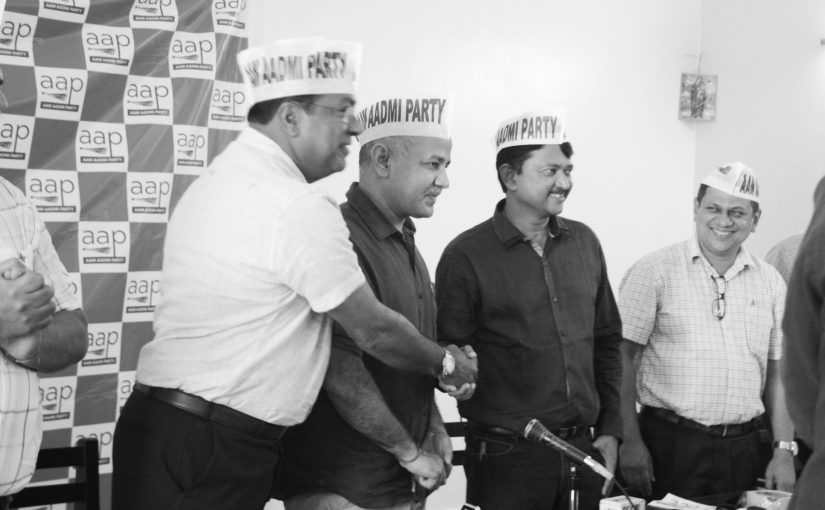 AND a few stray thoughts on Elvis Gomes, one of the most senior officers of the Goa Administrative Service, formally joining AAP on Wednesday. Gomes, who was finally relieved from his post as inspector General of Prisons by the government, lashed out at the administration. In a press conference, he lamented on political interference in administrative functioning. Discipline was so bad that  even the lowest clerk with political patronage could defy senior officers. Gomes was disgusted with the politics of the seniority list which deprives honest officials a promotion to the India Administrative Service cadre.

It was widely expected that he would join the AAP and will probably be projected as its chief ministerial candidate if it forms the majority government. AAP has been putting up posters and banners in Goa claiming that a survey had predicted it would win 35 of the 40 seats in the Assembly. This has come in for ridicule by other parties as AAP’s candidates are either unknown or have a dubious background.

The loyalty of some of the candidates is suspect. The party’s candidate for South Goa in the parliamentary polls Swati Kerker recently released a photograph of party state convenor Valmiki Naik appearing to celebrate the victory of the Bharatiya Janata Party (BJP) in the Lok Sabha polls.

THERE is no doubt that Gomes is AAP’s best known and most winnable candidates so far. He has better credentials to become Goa’s chief minister than present chief minister Parsekar or other contenders. In the unlikely event that the Congress wins, there will be a bitter fight for the top post which will probably go to Goa Pradesh Congress Committee (GPCC) president Luizinho Faleiro, considered among Goa’s most corrupt politicians.

If Goa Forward wins, Vijay Sardessai will stake his claim to the post. The biggest nightmare is that Sudin Dhavlikar of the Maharashtrawadi Gomantak Party (MGP), who is both corrupt and communal, could become chief minister. Compared to all, Gomes has a clean reputation and is a competent administrator.

If he becomes chief minister, it will be the first time after Dayanand Bandodkar that a sports lover and sportsman will take the post. Unlike the other aspirants who can only play dirty politics, Gomes is president of the Goa Football Association.

And a few stray thoughts on the claim of politicians, NGOs and even industrialists that the legitimate custodians of Goa’s welfare are the people of Goa. None on the panel at the Prudent Media 10th anniversary event could agree on who ‘we’ represented.

BJP MLA Nilesh Cabral insisted that his party represented the people as it had been elected with a majority to rule Goa for five years. The implication was that since the voters had given the BJP a majority, they had no right to question any party decision. Cabral even claimed that the National Green Tribunal and courts had no business interfering in government decisions like building the third Mandovi Bridge.

His argument was that if the government decided on behalf of the people that a bridge was needed, then the courts had no right to interfere. This irritated moderator Arvind Bhatikar who silenced him by pointing out that law makers should not defy the law.

THE most prominent face of the AAP, Dr Oscar Rebello, insisted that only his party represented the people, saying that AAP was the most democratic party. Audience protests against Delhi-based parties trying to dictate to Goans what was in their interest led Dr Oscar to claim that AAP was very different from the BJP and the Congress with their high command culture.

He pointed out that AAP had prepared manifestos for each constituency after consulting the people and even the candidate was chosen taking the local people into confidence. But he could not explain why AAP needed party leaders from Delhi to select candidates to contest the election. He also came in for a lot of flak over AAP claims that it will win 35 out of 40 seats based on a survey conducted by the party itself.

Fatorda MLA Vijay Sardessai clarified that anyone who had the interest of Goa at heart irrespective of whether he was a Goan by birth or domicile was entitled to call himself/herself Goan. This included Goans working abroad and people of Goan origin settled abroad.

IT IS not widely known that Sardessai himself was born in Venezuela, once a prosperous nation with huge oil reserves which is now in an acute financial crises. We only hope that Venezuelan dictator Hugo Chavez who ruined the country is not a role model for him. The MLA believes that only a local party can serve Goa’s interest.

He is opposed to both BJP and Congress, and is very bitter with the latter for denying him a ticket in the last elections, dashing hopes of a grand alliance of all secular forces.

The two other speakers, Claude Alvares and Ambar Timblo, could not compete for attention with the politicians. Alvares, who heads Goa Foundation which brought mining in Goa to a halt through its public interest petition in the Supreme Court, has been stressing that all the minerals and natural resources belong to the people.

He has been demanding that the government take over the running of all mines, and has launched the Goan Mitti (Goan soil) movement which seeks a takeover of existing mines by co-operatives of the stake holders. Alvares has been accusing the mining lobby of looting and plundering Goan people. Rather like Narendra Modi, he has been promising that if the government recovers the `35,000 crores lost due to illegal mining, every Goan would become a crorepathis. The voice of Ambar Timblo, the only representative of industry, was drowned in the noise made by the politicians.

AND a few stray thoughts on businessmen in Goa being unanimous over the difficulty in doing business in Goa. It is a nightmare. Builder and franchisee of Monginis bakery Datta Naik said that he would not advise his children to enter business in Goa, implying his regret in pushing his son into taking over his business six years ago. He pointed out that it took him six years to get an industrial plot allotted by the Industrial Development Corporation.

Naik said that it was not only Catholics who were born with a passport in their mouth as had been pointed out by Advocate Radharao Gracias, but also Saraswats because of rampant corruption. He warned that the Saraswats would also migrate out of Goa as it was much easier to do honest business abroad.

Industrialist Manoj Caculo has already complained about the steep increase in road tax, which is 20 per cent in Goa compared to 10 per cent or less in neighbouring states. As a consequence, car dealers here are on the verge of closing down.

Normally, Dussehra and Diwali is the peak season for car purchases in Goa, which is a good market for high-end cars. But sales have fallen drastically as it is now cheaper to buy and register the car in Karnataka. Caculo, who is diversifying into restaurants, also complained that more than 20 permits were required to set up a small business like a hotel. While big sharks could get projects approved through the Investment Promotion Board (IPB), Goans who wanted to start businesses were harassed by everyone.

The most outspoken industrialist was Sriniwas Nayak of Pride Group of casinos, who is also a builder. He is understandably bitter because he has been harassed by Kashinath Shetye, allegedly a blackmailer who files endless RTI applications and cases against businessmen and even government officials. No wonder that Nayak lamented that the most successful industry in Goa was the RTI and NGO industry.

There is no investment and assured return. Nayak asserted that if the laws were clear, all businessmen would obey them. He claimed that the casino industry was continuously harassed by government agencies like the Pollution Control Board and NGOs because they were soft targets.

ON THE charge that casinos did not employ Goans, he insisted that he was keen on hiring Goans and would even provide training in the skills needed. The problem was that Goans were just not interested in working. He cited many frustrating examples including a parent who persuaded him to give his son a job but not on night shift. Another asked for vegetarian food for his son during Sharawan. One employee wanted leave to attend the village feast within a month of joining. In no country can employers work with such demanding staff.

THE loan representative of the mining lobby blamed the industry for the suspension of mining. He pointed out that when the Chinese boom started, everyone joined the party and thought it would never end. Everyone, including truck drivers, barge owners and those who supplied equipment to the industry, made money.

When the party was over, everyone started complaining. You cannot party 24 hours a day, 365 days a year even if Goa Tourism ads project the state as a 365-day party destination. Goan employees seem to believe they can party even during work. The government should wake up and smell the coffee.

Contrary to prime minister Narendra Modi’s claims and Parsekar’s boasts, businessmen in Goa feel it is a nightmare to be in business and want to get out as soon as possible. Only the sharks and rattlesnakes from outside who bribe their way flourish in Goa at the expense of local industrialists.

And a few stray thoughts on Parsekar declaring that mobile phone companies would not require panchayat permission to set up mobile towers. He has issued an order that no NOC is needed from the panchayat to set up the towers. In the wake of resistance from villagers, he threatened to use arms against them, as if they were terrorists from Pakistan. His excuse is that the towers are needed for the successful conduct of the BRICS summit scheduled for next week.

The risk of radiation may be exaggerated and the jury is still out on whether mobile towers are harmful. But it is certainly unethical of a leading cancer expert and president of the Goa Medical Association to claim that they are harmless. The Supreme Court itself has ruled that mobile phone towers should not be set up in the premises of schools. Abroad, mobile phone towers are set up in remote areas and not in residential areas.

And a last stray thought for yet another Saturday. The Modi government and the defence minister are in a catch 22 situation. There are increasing demands that they furnish proof of the surgical attacks against militant camps on Pakistan. This is in the wake of statements from the United Nations that they could not find any evidence of a counter terrorist strike by India.

Pakistan has denied they ever took place. It has even taken bus loads of international journalists to spots claimed to have been destroyed by India’s surgical strike. A Congress MP from Mumbai Sanjay Nirupam has also claimed that the strikes never took place.

If the Indian government does not provide proof, Pakistan can continue to claim that there was no strike. This is good for India as there would be no pressure to take revenge. If India succumbs to pressure from people like Arvind Kejriwal and the Congress and provides evidence, Pakistan would have to act. This will lead to escalation.

Anna Hazare is right and it is an insult to our jawans to ask for proof of the surgical strike against militant camps in Pakistan.