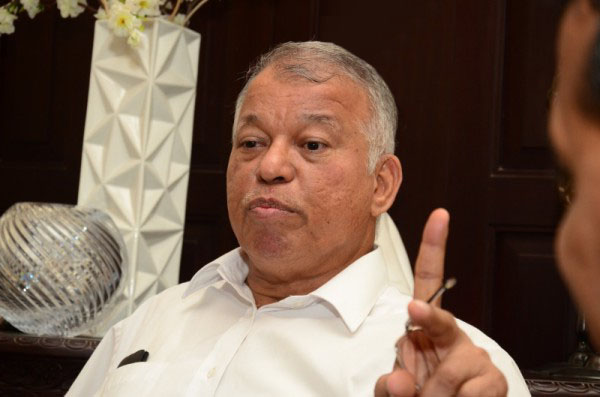 SOME months ago I had suggested to one of my directors, Dr Francisco Colaco, that I was planning a series on Goa’s political monsters. I have known them all, both former and present chief ministers, all members of cabinets and how they looted the public.

Many were unfortunately monsters I had created, like Churchill Alemao and Luizinho Falerio who had become heroes of the Konkani agitation thanks to me. But when they came to power and became crorepathis by looting the public and misusing their position, they all forgot about Rajan Narayan and Goan Observer.

Former chief minister and current president of the Goa Pradesh Congress Committee Luizinho Faleiro had boasted about borrowing money from the Economic Development Corporation (EDC) to buy land at a low rate before announcing that Verna would be the location for the electronics industrial estate. He then sold the land at huge profits when it was set up.

During Manohar Parrikar’s tenure as chief minister, he had exposed how Faleiro had extorted money from the Steel Rolling Mills in a white paper. All this and more will appear in my series on Political Monsters of Goa which will begin shortly. But Faleiro is not the only monster I will write about in the run up to the elections. To maintain the suspense, I will not mention the names for the moment.

Among the stories is the sordid tale of the brother-in-law of a former chief minister running a prostitution racket from Vistar Hotel in Panjim. A fearless IPS officer, Shrish Thorat, raided the hotel, arrested and slapped him around.

Thorat was not only suspended but hounded out of his job. The former chief minister, who was the cause of this, came rushing with an industrial friend to my basement flat in Dona Paula to plead with me not to write about his brother-in-law’s involvement in prostitution as he had just got engaged and his reputation would be spoiled.

And then of course there was the former Maharashtrawadi Gomantak Party (MGP) leader who became a chief minister by defecting from his party and joining an alliance formed by the Congress under late Dr Wilfred D’Souza. He was having an affair with the daughter of the president of the Goa Pradesh Congress committee. Her husband worked on the ship and was sailing most of the time.

He was afraid I was going to use the tape. Since the husband did not have any objection and the mother-in-law kept quiet, I let him go, as it was now his private affair. I would not have been so forgiving had I known he was deeply involved in the drug trade.

I also have interesting stories about the longest serving chief minister, Pratap Singh Rane – how he manipulated the land revenue and the Mundkars and Tenancy Act to deprive the people of Sattari of their rights. And how he used and misused his position to promote his wife, who was for a long time chairperson of Bal Bhavan and Sanjay School for special children. When he was toppled from the post, his wife Vijayadevi was so mad that she destroyed all the flower pots in the official residence.

The series will also tell you stories about the intolerant and vindictive attitude of chief minister and present raksha mantri Manohar Parrikar. In the good old days when he first became chief minister and hid behind the mask of secularism, he invited Tara and me for a private dinner at the International Centre Goa, and on both occasions did not pay the bill.

When my better three-quarters wrote about a dirty gaddo he patronised outside Alankar cinema for ros omelette during a dengue epidemic, he denied it and also ordered the owner of the Herald to stop her column. He later filed a defamation case against all editors and publishers for carrying a statement by Luizinho Faleiro on how he favoured his brother-in-law who had defaulted on his loans to the EDC.

There are many more stories waiting to be told. One is the case of a former Union Minister for Law and former deputy chief minister of Goa who extended a huge loan to the son of then prime minister Deve Gowda without any security. He also abused his position as chairman of a leading co-operative bank.

Or the story of the PWD minister who bought water storage tanks at public expense to bribe voters before an election. Or another PWD minister belonging to the majority community whose wife is a senior sadhak of the Sanathan Sanstha has been implicated in the murder of the rationalist Govind Pansare and the Margao bomb blast which almost claimed the life of Digambar Kamat.

Watch out for our political monster series which will begin soon.