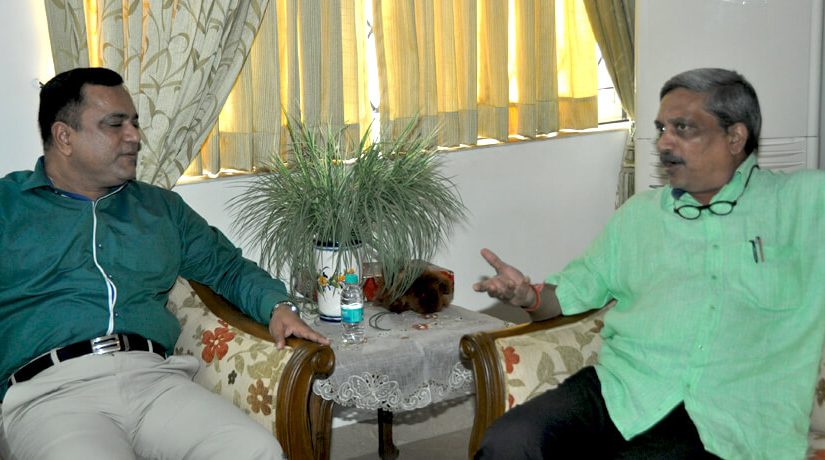 OPPORTUNISTIC: Manohar Parrikar filed the complaint of abetting power theft against Mauvin when he was in the opposition but withdrew it when the BJP joined the coalition of a Francisco Sardinha.

Among the veteran political monsters is the Dabolim MLA Mauvin Godinho. There are cases pending against him for power theft and for assets disproportionate to his known sources of income. Mauvin is shifting to the BJP for insurance against action on his corruption cases

Among the biggest political monsters of Goa is Dabolim MLA Mauvin Godinho, whose affair with the Sangh Parivar is not recent. It goes back to the time when Manohar Parrikar helped Francisco Sardinha topple the Rane government in 1999. Ironically when Godinho was Power minister in the Rane government, Parrikar filed a complaint against him for misusing his official position for personal benefit. But subsequently when the Bharatiya Janata Party (BJP) became a partner in the Sardinha government, Parrikar tried to withdraw the complaint. But he was not permitted to do so as the state had become a party.

But what provoked the complaint? Successive chief ministers in the 90s had extended concessions in power tariff to steel rolling mills. These mills melt scrap for products like steel rods for the building industry. One of its main raw materials is power to fire the furnace and shape the steel. It is alleged that several Congress politicians made a lot of money by offering power rebates to the mills and generous loans from the Economic Development Corporation (EDC). The politicians who benefitted from these dubious deeds included Industries minister Luizinho Faleiro and Power minister Aleixo Sequeira from the Rane cabinet.

When Rane became chief minister in 1997, the cabinet decided to end the power rebates to steel rolling mills following complaints from the electricity department that the mills had not even paid the concessional charges. They had run up arrears running into crores. Due to political pressure, the connections could not be terminated. Many were also accused of stealing power.

The entire cabinet agreed with Rane that the rebates should be stopped. Mauvin Godinho in defiance of the cabinet continued to grant rebates even after the deadline for stopping them causing Parrikar to file the complaint.

When the case came up for hearing, it was proved that Godinho had defied the cabinet. Rane confirmed that the rebates were illegal as they were given after the cabinet had directed him to stop them. It was a clear case of misuse and abuse of power by the power minister. It is alleged that there were huge kickbacks from the owners of the mills. Ironically, it was Parrikar who tried to save Godinho when he became chief minister by attempting to withdraw the case.

When Parrikar became chief minister with a majority on his own, he did not pursue the case. The duo however fell out and a fresh case was filed against Godinho for having assets disproportionate to his known sources of income. Godinho had amassed wealth much more than he could have earned as an MLA, minister or businessman.

In the 2007 assembly elections, Godinho had declared assets of Rs 2.73 crores. In 2012, five year later, his assets had grown to almost Rs 8 crores, representing an increase of Rs 7 crores – 191 per cent over his declared assets in 2007. No doubt in the last four years, Godinho has made further additions to his assets.

Godinho filed a special leave petition against the high court order on the framing of charges in the Supreme Court in 2007. The case came up for hearing on January 30, 2011 and has not come up since despite the court order that the matter be expedited. Advocate Aires Rodrigues filed a complaint with the Supreme Court over the delay, pointing out that the last hearing had been held three years ago. As far as we know, nine years have passed since Godinho filed the special leave petition. It has yet to be fully heard and disposed of by the Supreme Court.

I knew Godinho when he was president of the Youth Congress in the 90s. He had already discovered how to misuse public property for his private benefit. For his wedding reception, he hijacked Chicalim public garden. His new wife was recovering from severe malaria and fainted during the first dance. His decision to join the BJP and contest on the saffron ticket is possibly motivated by the hope that he will continue to evade punishment in the power scam and the disproportionate assets case pending against him.

He is also alleged to have looted the Sancoale Communidade. Indeed Godinho had allegedly cheated in a much bigger fashion than any other politician. But no action has been taken against him because he has become very close to the BJP. Godinho knows that as long as Rane has influence in the Congress party, he cannot hope for any forgiveness. If the Congress returns to power, the cases against him which are crawling will start galloping. Godinho cannot try to manipulate the prosecution as he has successfully done all this years.

It is not current deputy chief minister Francis D’Souza who is the first Hindu Catholic. Godinho is competing for the title. In 70s, he was considered the brightest young man in the Congress, but has lost his way. Due to the corruption charges, even his close links with the Gandhis did not help him.

Rane managed to convince Sonia Gandhi that Godinho was corrupt and should not be given a ticket. Despite this, he got a Congress ticket and won Dabolim in 2012. In a case of rats leaving a sinking ship, Godinho is now all set to desert the Congress party.

In the Parliamentary election in which Narendra Modi became prime minister, Godinho supported the BJP. As a reward, Parrikar has promised him the BJP ticket for Dabolim. The only problem is that BJP workers as well as alliance partner Maharashtrawadi Gomantak Party (MGP) is against giving him a BJP ticket for Dabolim.

In fact, the MGP wants the seat and has threatened to break the alliance with the BJP if it insists on giving the ticket to Godinho. It looks as though Godinho has reached the end of the road. But he is very enterprising and may succeed in bribing his old party, the Congress, to give him a ticket, particularly after the survey that the Congress will do much better this time and rumours that senior Rane may not contest in 2017.