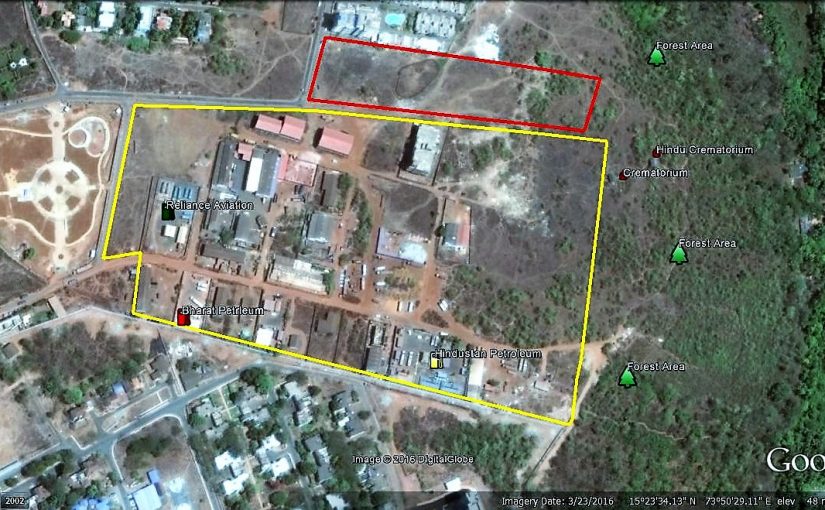 LAND GRAB: Dabolim MLA Mauvin Godino is alleged to have grabbed 15,000 square metres of land for Edify School promoted by him

It is October 15, 2016, a very busy Saturday as Goa is excited and involved in the BRICS (Brazil, Russia, India, China & South Africa) Summit, turning into a virtual fortress. The high-level four-tier security stops every vehicle, each suspicious looking character on the road. As convoy after convoy speeds past the infamous denotified Survey No 8/1 of Dabolim village (the scene of the notorious Dabolim Airport Parking Denotification Scam), a little further an institutionalised crime continues unchecked by security agencies.

There, on a Saturday, the Communidade of Chicalim and Revenue Department officials with a private khaas aadmi, architects, contractors all assemble to survey a piece of land. As drill machines, mechanised compressors and trained labourers neatly get down to demarcating the piece of land, it is interesting to note why officials are working overtime on a holiday, particularly when the rest of the state is in a virtual curfew. The operation carries the mark of local MLA Mauvin Godinho.

LAST year on July 30, the state government, through its administrator of Communidades of South Zone at Margao, announced that 15,512 square metres of an ‘uncultivated and unused’ plot of land belonging to Chicalim Communidade bearing Survey No (7/1) (part) called Nicor Ginaor Arcalgina Martilem was being given to Valens Education Society. The hush-hush deal was never publicised and may have gone unnoticed had Goan Observer not chanced upon an innocuous looking signboard on Chicalim’s Airport Road which says Senior Citizen’s Park sponsored by Edify School. So what is the connection and the scam?

CHICALIM Communidade has given away 15,512 sq m of land to Edify School to develop its educational institution at Survey No 7/1 (part). While the Goa government rate puts this property in the bracket of `1300 / sq m (total cost `2.02 crores), the Chicalim Communidade has demanded `1600 / sqmtr (`2.48 cr). Up front, it might seem as if the Communidade demanding a little more to pay off the zonn to its shareholders. The truth is the Communidade members and their godfather have been paid well to make a sellout deal.

The property sandwiched between Murgao Industrial Estate and prime real estate land is currently valued at `15,000-25,000 per square metre. At that rate, the deep-pocketed Edify School promoters would have dished out a whopping `24-40 crores for the property. Communidade members reveal that its executive committee has been run by people close to Godinho. They have, in the past too, entered into such sell-out deals where prime Communidade land is sold and in lieu, the Dabolim MLA pockets the lion’s share and his cronies get the crumbs. The land deal would have left the Communidade management richer by `20-38 crores unofficially.

COMMON knowledge has it that the land belonging to the Communidade is used only for public welfare and purpose. This particular piece of land was earlier earmarked for a senior citizens’ home by the Communidade. Why then was public land meant for building a safe haven for the old and the needy given away to a rich man?

Chicalim Communidade under the guidance of its patron Godinho and his friendly Goa government used Amendment of Article 334-A of Code of Communidades which allows “provided further that the government may, with the prior consent of the concerned Comunidade, grant on lease, land admeasuring up to 2 lakh sq mts, to any educational or health institution or any charitable and/or social trust or society or any similar social institution of public utility or engaged in the field of education or health, duly recognised by the government, for the purpose of any scheme, without auction”.

The ruse of an educational institution and the idea of public service was made to gift prime Communidade land that could have been used for other profitable yet public purpose to a private profiteer masquerading as an education society. Valens Education Society is a profit-making organisation that runs an Edify School in Mangor, Vasco da Gama. Most importantly, why was prime community land leased for a private purpose to a private investor for profit that would be pocketed by him?

A 10,000 SQ M built-up area is slated to come over the 15,512 sq m land under the garb of Edify School, Goa (http://www.abindesignstudio.com/projects/details/81-edify-school-goa).

Commissioned by Agarwal Packers & Movers group owned by Edify Education Pvt Ltd, it is currently being run in Mangor Hill by Valens Education Society at House No. 141, Mangor Hill in Vasco Da Gama owned by Mauvin Godinho, though the house has been registered in his mother’s name.

Godinho has been facilitating the operations of Valens Education Society and Edify School Goa, encashing his position as the rogue Congress MLA-turned-BJP government approver, a move that also got him the coveted post of chairman of the South Goa Planning and Development Authority despite being from the opposition party.

What Godinho did was facilitate the sponsorship of a small park meant for senior citizens on prime Communidade land on Airport Road, Chicalim. The naïvety of his fraudulent politics showed as a huge strategically displayed board proclaiming that the park was sponsored by Edify Goa.

Next, the Communidade members who are all his plants showed the ‘charity’ of Edify School in the form of a park for old people to the aging members of Communidade of Chicalim to pass the resolution favouring the private school. What was never told to the members was that this was a residential school for rich men’s children built on the land of our forefathers that was kept aside for a senior citizen’s home. Godinho and his Communidade cronies were laughing away to the banks.

THE entire handover of this prime Communidade land valuing over `40 crores has been marked in secrecy and stealth. While nobody in the neighbourhood knows what the land that had a small plot growing wild variety of rice was being used for, the entire operations have been raising eyebrows. The residents have no clue when the gazette notification announcing the lease land to Valens Education Society was announced.

Goan Observer dug up that the land was actually leased in July last year. Its demarcation too has been shrouded in secrecy on December 15 last year during a period of holidays and office breaks. Surveyors from the Revenue Department and Communidade of Chicalim along with members of Valens Education Society surveyed and demarcated the land after office hours.

Interestingly, the local panchayat that owes allegiance to Godinho has been kept out of the proceedings lest they too demand their pound of flesh. Inquiries at the panchayat reveal that the it has no knowledge of the upcoming school.

“Alert citizens have brought to our notice that such a school is coming up on Communidade land, but we have no knowledge of it. In fact we came to know of the school when we received a complaint saying that a school was being built so close to aviation turbine fuel bunkers in Murgao Industrial Estate, but we had no clue,” clarifies Kiran Mesta, secretary, Village Panchayat of Chicalim.

In a typical guerrilla style operation, Valens Education Society and Chicalim Communidade officials have even started constructing an illegal fence since October 17 around the demarcated land. “We have received no application for permission to put up this fence nor has it been discussed in any of our meetings,” confirms former sarpanch and Ward No 8 panch Francisco ‘Shikeet’ Nunes. “We have however received a complaint stating that this school will be in the danger zone of fuel bunkers and we won’t put the lives of children at peril”.

However, the local residents’ complaints to the panchayat and Block Development Officer (BDO) Mormugao’s offices too have fallen on deaf ears, pointing to an unholy alliance between the Communidade, panchayat and state government

THE dictionary meaning of the word ‘edify’ may mean to “instruct or improve (someone) morally or intellectually” but the fact remains that this whole project has been planned and is being executed compromising every moral using distorted intellect.

The land – which as per Goa government’s gazette is “uncultivated and unused” – was being used to cultivate a wild variety of paddy and vegetables by a member of the Communidade till few years ago. The Communidade denied him the permission to cultivate further due to a political fallout between Godinho and the Communidade member. Google Earth images of the plot over time clearly outline an egg-shaped plot within the plot that had a laterite stone fence around to keep off cattle.

But the school has more to it than meets the eye. It is being built in a radius of less than half a kilometre from Goa’s three major aviation turbine fuel (ATF) tank clusters belonging to Hindustan Petroleum, Bharat Petroleum Corporation and Reliance Aviation. Common knowledge has it that the explosive impact of the highly volatile ATF can flatten buildings and scorch out lives in a two-kilometre radius.

Forest laws are also being violated as the proposed school is adjacent to a thick vegetated home to leopards, peacocks, wild boars, pythons and cobras all unsafe for children and also adjacent to a Hindu crematorium. Could the Edify School management not consider even child psychology while planning its Goa school? The remote location also features on Goa Police’s hot spot / watch list for narcotics and psychotropic drugs sale.

The former played host to Godinho’s family in Dubai where he runs a successful advertising business. The duo was brought together by the Dabolim Airport parking land de-notification, after which Vales sought ‘justice’ for compensation as he felt that the state government compensation of his land acquired for widening the NH-17B near Alto Dabolim was insufficient.

A greedy Vales, despite receiving compensation, wanted more and used Godinho’s stranglehold over Chicalim Communidade to seek an alternate piece of land over and above the compensation. Needless to say, Godinho is a shadow informal partner to the Valens Education Society and its saga of grabbing Goan land for selling out to non-Goan land sharks as much as he has been a part of the heavily polluting Pinky Shipyard or the Chicalim Communidade’s multiple plot scam at Alto Chicalim.

With many of the Goan politicos, a Middle East connection too is up for questioning as whispers of money laundering grows, this new brothers-in-heist combo of Godinho and Vales may well be another set of new players who sell Goan community land and store the money away in a safe haven abroad.