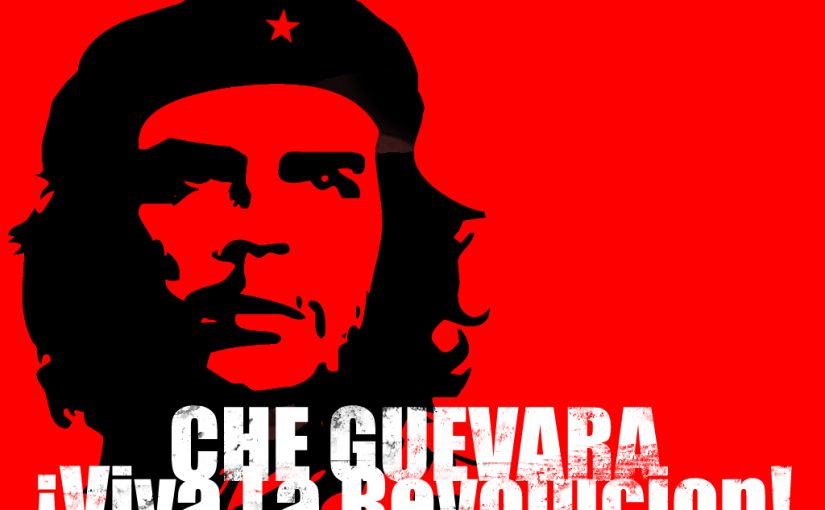 CRUEL IRONY- Che Guvera who inspired the revolution in Cuba was converted into a brand to sell a wide range of purely commercial products ranging from T-shirts to coffee mugs and even condoms. Che went from being a symbol of resistance to the capitalist system to becoming one of the most marketable and marketed brands around the world. It is the above image based on a photo shop image of Che Guvera with an enigmatic Mona Liza smile that had launched a billion products in a globalised world. The Fatorda MLA Vijai Sardesai shares his birthday with Che

The hero of the Cuban Revolution was Che Guvera who was the closest companion of Fidel Castro who led the revolution against the dictator. Castro went on to build the first truly socialist country in the world where everyone got the same salary whether it was the General Manager of the hotel or the room service boy. Cuba is the only country to provide Universal 100% medical care and education up to any level. The death of Fidel Castro raises disturbing issues over its future, coming soon after Obama lifted the embargo after 50 years on trade with Cuba which is across the bay from Florida in the US

NOT just in the hearts of revolutionaries, Marxist insurgents and rebellious teenagers, but on T-shirts, watches, sneakers, key chains, cigarette lighters, coffee mugs, wallets, backpacks, mouse pads, beach towels and condoms. He’s not only been used by politicians like the Venezuelan president, Hugo Chávez, to promote their own agendas, but he’s also been employed by merchants to sell air fresheners in Peru, snowboards in Switzerland and wine in Italy.

The supermodel Gisele Bündchen pranced down a runway in a Che bikini. A men’s wear company brought out a Che action figure, complete with fatigues, a beret, a gun and a cigar. And an Australian company produced a “cherry Guevara” ice cream line, describing the eating experience like this: “The revolutionary struggle of the cherries was squashed as they were trapped between two layers of chocolate. May their memory live on in your mouth!

As Michael Casey, the Buenos Aires bureau chief for Dow Jones Newswires, observes in his fascinating new book, “Che’s Afterlife,” the image of Ernesto Guevara most frequently used by politicians, demonstrators and merchants alike is based on the famous 1960 picture of the guerrilla leader taken by the Cuban photographer Alberto Díaz Gutiérrez, known as Korda. It’s the familiar, ubiquitous close-up, often rendered in high-contrast blacks and whites, which features the handsome 31-year-old Argentine-born revolutionary looking off into the distance as if he had his eyes on the future, his gaze — described, variously, as pensive, determined, defiant, meditative or implacable — as difficult, in Mr. Casey’s words, “to put a finger on” as the Mona Lisa’s smile.

In this bracing and keenly observed book, Mr. Casey traces how Korda’s photograph became one of the most widely disseminated images in the world, how Che went from being a symbol of resistance to the capitalist system to one of the most marketable and marketed brands around the globe, how the guerrilla fighter became a logo as recognizable as the Nike swoosh or McDonald’s golden arches.

Although newspaper and magazine articles have traversed this ground before, none have done so with the thoroughness and globe-trotting ardor of “Che’s Afterlife.” Mr. Casey has written a book that is not only a cultural history of an image, but also a sociopolitical study of the mechanisms of fame. It is a book about how ideas travel and mutate in this age of globalization, how concepts of political ideology have increasingly come to be trumped by notions of commerce and cool and chic, and how the historical Che Guevara gave way, post-mortem, to a host of other Ches: St. Che, said to possess the ability to perform miracles; Chesucristo, a Christ-like figure revered for his ideals, not his advocacy of violence; an entrepreneurial Che, promoting the lesson “that individuals should honestly strive to produce their utmost for the good of all”; and the Rock ’n’ Roll Che, more representative of youthful anti-authoritarianism than of any political dogma.

Korda’s famous photograph of Che was taken in 1960, at a state funeral for victims killed by an explosion aboard a freighter docked in Havana’s harbor. By radically cropping the shot, snipping out a palm tree and the profile of another man, Korda gave the portrait an ageless quality, divorced from the specifics of time and place.

This abstract element would be emphasized further in paintings and silk-screen variations on the picture (like those done in the style of Andy Warhol’s Marilyn and Mao), which, Mr. Casey notes, stripped the image of its historical and political roots and created a more mainstream, accessible Che.

Korda, who died in 2001, Mr. Casey writes, would not be able to collect royalties on his wildly ubiquitous image until 1997, when the Castro government signed the Berne Convention for the Protection of Literary and Artistic Works, an international copyright treaty.

Although Korda’s original photograph was not widely distributed for years, Mr. Casey says, Fidel Castro began using the image as a branding symbol for Cuba in 1967, months before Che’s death. It was a clever marketing plan on Mr. Castro’s part: Che’s denunciations of the Soviet Union made him popular among “thinkers and artists of the Western European left, many of whom had lost faith in the Soviet Union,” while his condemnation of imperialism “sat well with young radical students in the United States and Europe, who were impatient for societal change and for whom the very word revolution was inspiring.”

After Che was killed in Bolivia in October 1967 at 39, at the end of a disastrous guerrilla campaign, his fame and popularity — as a martyr now — spread even more rapidly around the world: red and black posters based on Korda’s photograph became symbols of the resistance movement during the 1968 student protests in Paris. They surfaced, too, in America, where the revolutionary was embraced by both the Black Power movement and by hippies and antiwar activists.

In its May 17, 1968, issue, Time magazine observed that the Che legend had given “rise to a cult of almost religious hero worship among radical intellectuals, workers and students”: there were “Guevara-style beards” and berets in Italy, the magazine reported, and “handkerchiefs, sweatshirts and blouses decorated with his shaggy countenance” in “half a dozen countries” — all making for “a new source of profits for composers, poster makers and book publishers.” It was an article that could have easily run some four decades later, on the occasion of the 40th anniversary of Che’s death.

Clearly, it’s not what Che Guevara had in mind when he declared that “the revolutionary idea should be diffused by means of appropriate media to the greatest depth possible,” but in becoming one of the world’s most iconic brand names, Che has achieved an immortality that even exceeds the predictions of the stranger he meets at the end of his “Motorcycle Diaries,” who tells him “the spirit of the beehive speaks through your mouth and motivates your actions.”

Though anti-Castro Cubans continue to denounce him as a murderer with a cold capacity for violence, Che is embraced in Latin America and the Middle East and by antiglobalization protestors as “a die-hard foe of yanqui imperialism”; in Hong Kong as a symbol of rebellion against the authoritarianism of the Beijing government; and in the United States by immigrant activists, demanding “the right to inclusion, to be considered part of the American Dream.”

For many, Che has become a generic symbol of the underdog, the idealist, the iconoclast, the man willing to die for a cause. He has become, as Mr. Casey writes, “the quintessential postmodern icon” signifying “anything to anyone and everything to everyone.”