Manmohan Singh deplored  that  implementation of the scheme which had imposed a huge burden on the poorest of the poor. The Former prime minister who was also the finance minister who initiated the process of Liberalisation blamed both the PMO and the RBI 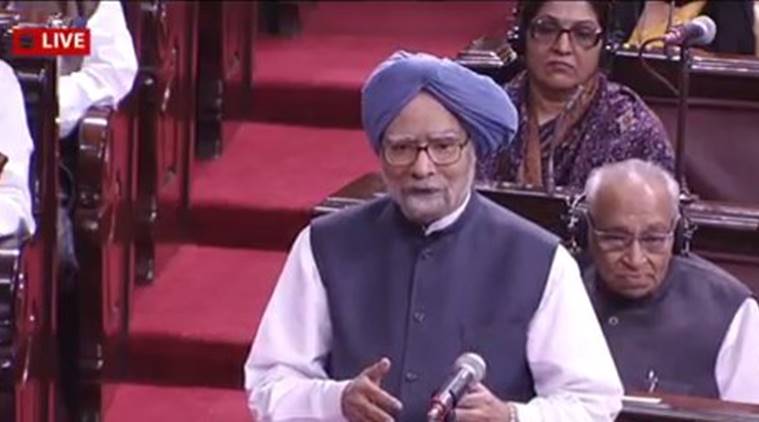 CALLING it a ‘monumental mismanagement’, former Prime Minister Manmohan Singh on Thursday said that the demonetisation of high value currency notes has caused great distress to the common man of the country. He remarked that the GDP of the country could shrink by 2 percentage-points due to the way it has been implemented.

Here is the full text of Manmohan Singh’s full speech in Rajya Sabha:

I rise to highlight some of the problems that have risen after the decision to demonetise Rs 500 and Rs 1000 currency notes.

Prime Minister has been arguing that this is the way to curb black money, to prevent growth of forfeiture currency notes and also to help in control of terrorist finance activities. I do not disagree with these objectives. But I do want to point out this that in the process of demonetisation monumental mismanagement has been undertaken about which today there is no two opinions in the country as a whole. Even those who say that this measure will do harm or cause distress in the short term but be in the interests of the country in the long run should be reminded of what John Keynes said once,” In the long run all of us are dead.”

And therefore, it is important to take note of grievances of the ordinary people who have suffered as a result of this imposition on the country overnight by the Prime Minister. And I say so with all responsibilities, that we do not know what will be the final outcome.

Prime Minister has said that we should wait for 50 days. Well 50 days is a short period. But for those who are poor and from the deprived sections of the society even 50 days torture can bring about disastrous effects. And that’s why about 60 to 65 people have lost their lives, maybe more. And what has been done can weaken and erode our people’s confidence in the currency system and in the banking system.

I would like to know from the Prime Minister the name of any country he may think of where people have deposited their money in the banks but they are not allowed to withdraw their money. This alone,I think, is enough to condemn what has been done in the name of greater good of the people of the country.

And Sir, I would further like to point out that in my opinion that the way the scheme has been implemented will hurt agricultural growth in our country, will hurt small industry, will hurt all those people who are in the informal sector of the economy. And my own feeling is that the national income, that is the GDP, can decline by about 2 per cent as a result of what has been done. This is an underestimate, not an overestimate. Therefore, I feel that the Prime Minister must come up with some constructive proposal on how we can implement this scheme and at the same time prevent this distress that has been caused to the common people.

It is no good that everyday the banking system comes with modification of the rules, the conditions under which the people can withdraw money. That reflects very poorly on the Prime Minister’s office, on the Finance Minister’s office and on the Reserve Bank of India. I am very sorry that the Reserve Bank of India has been exposed to this sort of criticism which I think is fully justified.

I, therefore, would not like to say much more than this. I urge upon the Prime Minister to find practical, pragmatic ways and means to relieve the distress of the people who happen to be a great majority. After all, 90 per cent of our people work in the informal sector, 55 per cent of our workers in agriculture are reeling in distress. The cooperative banking system which serves large number of people in the rural areas is non-functional and has been prevented from handling cash. So, in all these measures convince me that the way this scheme has been implemented is a monumental management failure, and in fact, it is a case of organised loot, legalised plunder of the common people.

With these words, sir, I conclude. It is not my intention to pick holes in what one side does or another side does. But I sincerely hope that the Prime Minister will view that this late hour will help us to find practical, pragmatic ways and means to provide relief to the suffering of the people of this country. Thank you.