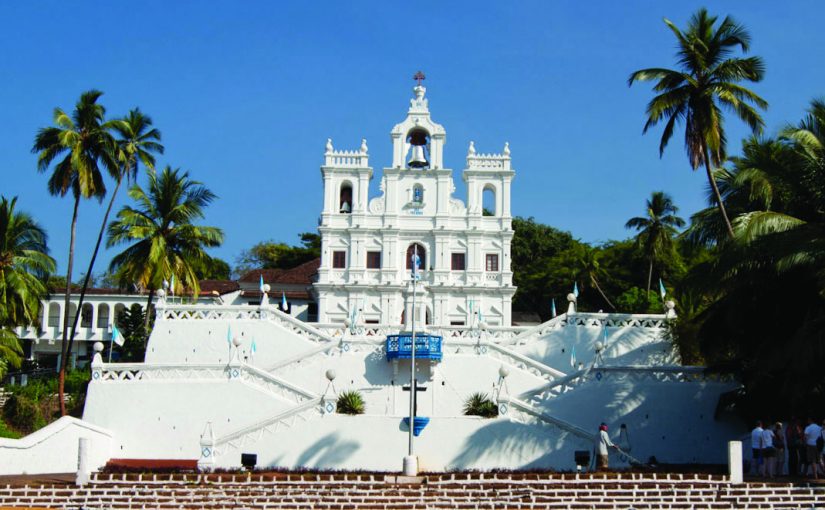 ABOUT a month ago, a Hindu friend of mine, who incidentally is a strong BJP supporter, after I-T raids on doctors, builders and mining barons, in the wake of demonetization, wrote on the face book, “The greatest arena for black money laundering are the Hindu temples in Goa. A thorough probe by a central agency will unearth the extent to which this is carried out”. A few days later, to everyone’s utter surprise, we read about the income tax notice to the Archdiocese in Panjim, Goa, giving the church just a day to get its act together and produce its records. Very odd indeed! For one, why only a 24-hour window? Then, why only select one religious denomination in a nation where the funds of temples and gold would probably trump the black economy?  Even though most of them come under government control there is no genuine calculation of the offerings of devotees at the temples between what is declared, what is earned annually and what has been stored over centuries. If one had to probe in-depth the malaise at the temples, India might well have been one of the richest countries in the world. The estimates are almost mythical in the number of zeros, but suffice it to say that if the Modi government was serious about actually ferreting out hidden wealth, this is the one highly sensitive area where this government’s mettle would be severely tested.

Against this canvas, the income tax notice to just one religious entity in Goa seems extraordinary and leads one to wonder why it was specially selected. That too, at a time when 160 churches across Goa are busy with the wedding season and a host of other functions. The preparations for Christmas have begun in right earnest. Many of the Churches are undergoing repairs. In the middle of all this the Archdiocese receives a letter asking them to furnish details of all cash and balance receipts of churches and societies registered under it. It has been further asked to reveal the number of notes of Rs.500 and Rs 1000 held by it on the closing day November 8. Vis-á-vis such a notice, it is heartening to note that the majority community was equally pained like the minority community as I-T department chose to grill the Church.

CHURCH RISES TO THE OCCASION

The notice was outrageous because it reached the Church on the very day of the deadline. “What was the urgency?” asked Fr. Valerian Vaz.”Are we not entitled to a reasonable time period to collect, compile and submit all these details from so many of our churches and institutions in Goa and Daman?” questioned Fr. Valerian.  Yet, the Archdiocese as an organized, structured, methodical and systematic institution accepted the challenge seeking a week’s time to reply. It rallied all concerned relying mainly on the hard work of each and every priest to submit the details to the Archbishop’s House which in turn submitted all the details to the I-T department on November 28.

“One would like to ask if letters have also been sent to the casino industry, for instance…The onus is now on the I-T department to prove that it is approaching the black money issue with an even hand. It has to show and prove that it is looking in the right places and not using the law as a tool to harass religious institutions.” There are no reports that Hindu temples in Goa have received any such Income-Tax notice. This is allegedly due to the fact that many temples do not come under the Income-Tax Act and are regulated by the Mazania Act. This hundred-year-old Portuguese Act is already being challenged staunchly by lower caste Hindus for several reasons: First, it reportedly favours the upper caste Hindus denying equal rights to the lower castes. The locals in Ponda, for instance, have been agitating for the past six months over the replacement of the idol in the Marcaim temple. In a memorandum to the authorities, the Ponda villagers feel that a small group of Mahajans are dominating the association of the Shri Navdurga Temple, Marcaim and are denying equal right of worship to the villagers and devotees. They further allege that a small group of Mahajans claim that they are owners of the temple and owners of the idol of Navdurga as per the Portuguese policy and Mazania regulation. Second, the villagers say the managing committee is collecting all the offerings made to the deity and that they (mahajans) are not even accountable to the devotees.

Therefore, there is consensus within a large number of Hindus about the need to amend the Mazania regulation to protect the fundamental rights of all to profess, practise and propagate the religion as well as to be involved in the procedure of checking account books to assess the veracity of audited statements of cash balance which run in crores.

As far as religious institutions of any denomination are concerned, it is felt by most, that there ought to be a level playing field.  Shantaram Naik, a member of Parliament from the Rajya Sabha from Goa, expressed his surprise that the central government was “selectively targetting” Goa churches and said that churches in the state should be exempt from Income-Tax just as Hindu temples were. I may beg to differ. I would rather make a plea that each and every religious institution should be brought under the purview of the I-T Act with the stipulated reliefs provided for charitable activities. In this way everyone will remain accountable for the monies received and the faithful will rest assured that there’s no hanky-panky anywhere.

CHURCH HAS NOT TAKEN UMBRAGE!

The Opposition mounted a stinging attack against the BJP government in power. BJP’s defense has been that if the Church itself has not taken umbrage why should others intrude? That the notice is not a penal action against the Church, but an effort on the part of central government to find the sources of black money. This leaves many questions unanswered. If one reads the script everything appears fine, but those who read between the lines suspect “hidden motives” on the eve of elections, one of them being the oft-reported allegation that the BJP General in-command wants to have the Church live in an atmosphere of fear to do its bidding.