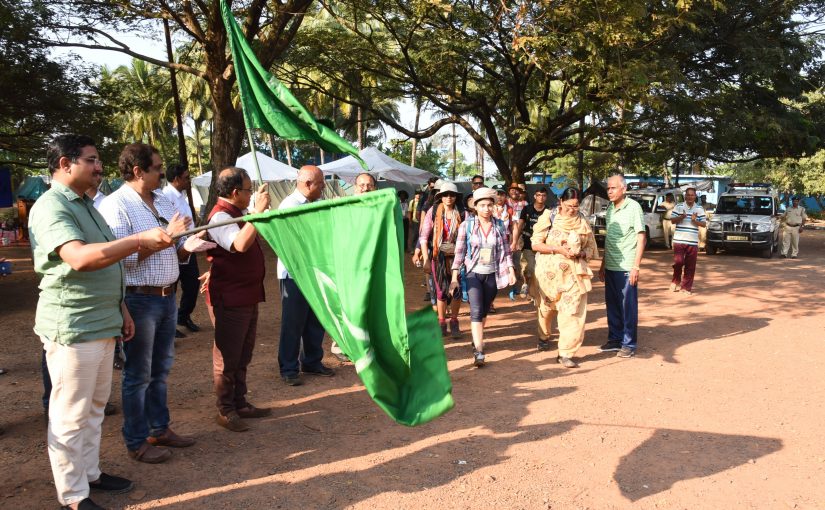 ON A TRAIL TO THE MOUNTAINS: Chief minister Laxmikant Parsekar flags off the National Trekking Expedition organised by Youth Hostels Association of India Goa Branch at Campal on December 16, 2016. MLA & chairman of EDC Sidharth Kuncolienker is also seen

ISN’T it amusing that in a sheer act of shadow-boxing chief minister Laxmikant Parsekar, while at the end of his tenure, says that he will probe the graft allegations in the PWD and Transport departments held by Sudin Dhavalikar who has just been dropped from the cabinet? Why did the chief minister all this while turn a Nelson’s eye to the exposed corruption, especially in the Tourism Department? Will he also dare probe the deep-rooted corruption among others and corporations like GSIDC, EDC and the Entertainment Society of Goa? In 2012, the BJP rode to  power on the promise of zero tolerance to corruption and good governance, but the state has witnessed the highest ever levels of corruption, nepotism and abuse of power never seen before!

THE other day I saw the bronze life statue of Edward Soares, former principal of St Thomas High School at the central triangle in Aldona, and while reading the words on the plaque my mind rolled back to my days at the school. It reminded me of what a great principal he was and how he moulded many young minds and his students later became successful individuals.

Edward Soares guided his students with keen observation and without the use of a cane in hand. It is unlikely that the school will see a principal like him again! Soares was a visionary educationist who believed in the refining power of discipline in education.

The writing on the plaque reads that the statue was erected on his birthday December 9, 2006, by his ex-students and family. Alas, today this statue is breaking up and its surroundings in a mess, with bird droppings marking the face of a much-loved son of Aldona. Surely on his birthday he deserved a clean-up and at least a humble garland in remembrance?

The statue of principal Soares is immortalised in the hearts of many old-timers in Aldona and I hope it continues to serve as a beacon of light for generations to admire and emulate.

ONE FOR ELVIS GOMES!

AFTER going through the merits and demerits of BJP and Congress corruption and the criminal scandals associated with their candidates, I can say that the only party that is likely to give Goa a clean, corruption-free government in the forthcoming March 2017 Assembly elections is the Aam Aadmi party! Their candidates have criminal-free records and they come across as candidates who inspire trust.

Goa badly needs a change of governance or the same old crooks will continue to make our life miserable. In Cuncolim constituency I cannot think of anyone more honest and upright than Elvis Gomes, who resigned from his civil service job to take on the challenge of turning around the corruption-ridden political system in Goa. I have no doubt that he will win by a thumping majority.

Orville Dourado Rodrigues: The Indian government wants to control our lives, how we dress, what food we should put on our dining table, what educational institutions our children should go to, and now a limitation on the jewellery one possesses. Traditionally, jewellery is handed down generations, gifted by grandparents or other elders as heirlooms. How can anyone possibly validate that? The jewellery written about must be most probably either inherited or probably gifted to the bride according to Indian tradition and other jewellery could be purchased over time. I am sure that most retain the receipts issued by jewellery shops. What about millions of expatriates, especially those in south India who toil tirelessly to amass gold, so that their daughters are gifted the jewellery at the time of their wedding? This government sucks.

Salus Correia: Long live the BJP. We voted BJP so we cannot complain. These decisions are for the good of the nation and we will see that they are applied only to non-BJP supporters!

Bruce Dsouza: I did not vote for them.

Sidharth Bakre: Ancestral gold or gold in hand before November 8 does not come in ambit of scrutiny by IT Department. Gold bought on or after November 8 will be scrutinised. Finance Department already gave clarification on this which appeared in many newspapers.

Rajan Narayan, Goan Observer: This is not true. The relevant IT rules were framed long ago. For at least over a decade if you have gold more than 500g it must be reflected in income tax wealth returns. It is a blatant lie that only gold bought after demonetisation will be brought under scrutiny. Do not mislead people, please post notification backing your lie that only gold bought after November 8 will come under scrutiny.

Sidharth Bakre: First you prove your news coz ur misleading people.

Arvin Jaiswar: Has the government published any notification on this? So how we should believe this as genuine news.

Sidharth Bakre: It appeared in one of the newspapers recently. Amendments to IT laws: No tax on ancestral jewelry, purchased from…etc (see Economic Times)

Sanyog Kandolkar: Do you know what the cost of 500g gold is? You talk about common man and middle class people but I am sure we middle class people won’t be in any position to buy 500g gold right now. Its value in market today is `13.7 lakhs for 22 carat gold. Please don’t try to fool people.

Sanyog Kandolkar: This 500g gold restriction will give a pinch to rich people who are trying to convert their black money to white through gold purchases. And GO is trying to save their ass by posting something foolish.

Sidharth Bakre: Now there will be no reply from GO I guess. They are only good for sarcastic front page, nothing else. Damn you!

Goan Observer: The issue you yourself have admitted the onus of proof is on the bride, that even the ancestral gold and jewellery that you possess was bought from disclosed income. Most of us who live in urban areas have rural roots. Since there is no tax on agricultural income it is possible that the gold was bought from tax-free income.

Austin Fernandes: This government cannot do anything for the poor, so Modi wants to destroy the middle class by not allowing them to spend their own money or save it for the children. Please let us know about the minister who hired 50 planes for his daughter’s wedding, how much of it was white money…and can the common man afford it.