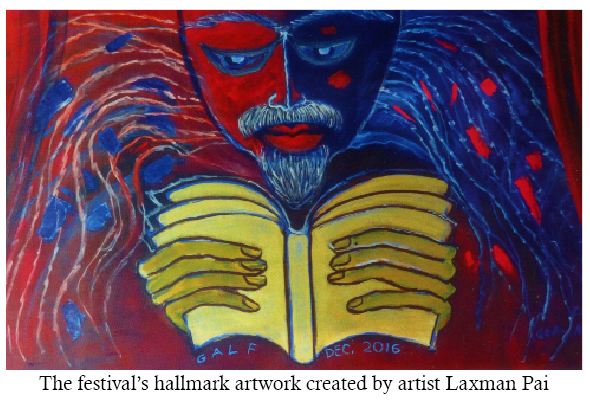 BEYOND GOLD- Most politicians wives are switching to pearls which can be much more expensive than even gold. Mrs Vijaya Devi Rane has admitted to owning many pearl necklaces

An overview of the 7th Arts & Literature Festival in Goa, by Tara Narayan

LITERATURE festivals can be like a breath of fresh air to sweep anxieties, fears, confusions, cobwebs of life away! Breathe deeply. As usual, this year’s 7th edition of the Goa Arts & Literature Festival hosted at the International Centre Goa too was a feast for the mind. It offered enough for one to pick and choose selectively whatever appealed from a cornucopia of modern-day fiction, non-fiction, historical fiction, historical non-fiction, graphic novels, prose and poetry in English as well as in the regional languages of India including Konkani. There were also book launches and books available on sale (beneath a shamiana out on the lawns), and a tribute concert to this year’s Nobel prize-w inning timeless and evergreen American poet-singer Bob Dylan by Lou Majaw. Majaw doesn’t like to call himself a fan of Bob Dylan but confesses to life transformation after hearing some of Dylan’s lyrics. He certainly celebrates Bob Dylan at his annual concert in Shillong, Meghalaya, or the Khasi Hills as he prefers to call his home place.

Let’s say the freewheelin’ Lou Majaw is our Bob Dylan from the north-east. Most of us who grew up in English-educated urban milieu are familiar with at least some of Dylan’s songs, particularly ‘Blowin’ in the wind….’, ‘A hard rain’s gonna fall…’ and ‘The times, they are a-changing…’.  Timeless lyrics, evergreen sentiments.  Dylan gets the Nobel prize for literature this year for the poetry of his lyrics and sizeable output. Majaw discovered him in 1965 and has ever since acknowledged that Dylan songs had the “power to evolve my soul”. If you feel the times we’re living in are bad for democracy to thrive and prosper in – and many feel like that these days – then at this year’s GALF, it was clear that there are enough people young and not-so-young who care enough to not go under or give up without a fight. They are not going to bow, bend or crawl. This much is clear at least when it comes to the right to expression, even if there was no representation from Pakistan this year.

The inaugural function’s two keynote speakers set the tone of the festival. If feisty writer and political activist from Tamil Nadu P Sivakami said that in India we’re currently living “in a state of cashless poverty and speechless democracy”, the Panjim-born Jorge Barreto Xavier (former secretary of state for culture, Portugal) rued the fact that it’s a world in which the rich are getting richer and the poor poorer. One per cent of the world has wealth equivalent to the collective wealth of the rest of humanity! So we’ve always had the politics of economy, politics of religion, politics of culture intertwining to create the forces of war as our world wars testify. His tightly packed talk is one worth studying if one is interested in how once again the retrogressive powers that be around the world are spoiling for a war, but one which will be more catastrophic than ever before. He pointed out that we continue to “live in a de-regulated and fragmented world,” perhaps only the power of discourse may bring us together to talk to each other and understand each other’s concerns, for we must go beyond “the cacophony of the present!”

Jorge Barreto Xavier cautioned everyone to beware the return of traditional dominant forces and the economy of inequality which is really an economy of slavery, but remember “today we have the extraordinary power to react globally… it’s a kind of vertigo!” He said we need to slow down the economy of life or soon we’ll be physically exhausted: “We need to build a better community and discourse is a good tool.” If one may say so, perhaps he’s reaffirming some of messages and values “Father of the Nation” Mahatma Gandhi valiantly got killed for! Whose world is it today? Are we still predominantly a Gandhi’s world out here (hopefully, we are!) or is it a Trump’s world which is manifesting itself globally and being mirrored in Modi’s world closer home? One may well ask these questions if we’re looking for solutions to rescue the world from a nuclear holocaust. Several sessions at the festival discussed the politics of our times. One, FlashPoint 2016: What now in Trump’s World  had Dr Faisal Devji in conversation with Ben Judah.

Devji is a reader in Indian History at the University of Oxford, fellow at St Anthony’s College, and author of ‘Landscapes of Jihad’, ‘The Terrorist in Search of Humanity’, ‘The Impossible  Indian: Gandhi’, ‘Temptation of Violence’ and ‘Muslim Zion: Pakistan as a Political Idea’. Among the several book launches were Mahabaleshwar Sail’s ‘Yug Sanvar/Age of Frenzy’  translated by Vidya Pai, Jayanti Naik’s ‘Salt of the Earth’ translated by Augusto Pinto, Cyprian Fernandes’ ‘Yesterday in Paradise’ (it is this Kenyan-born journalist’s debut novel), Roanna Gonsalves’ ‘The Permanent Resident’ attracted a lot of interest because she’s based in Australia and is a most gregarious author. Among politician writers of interest is the much seasoned Margaret Alva who has written about her innings in Indian politics. She has hung up her slippers and settled into peaceful retirement in Bangalore (like poor little Jayalalitha Jayram wanted to retire on her farmhouse with her dogs and books but never got around to doing). Catch up with her articulate ‘Courage & Commitment’ one of these days. She’s seen much life and times and is one of India’s longest-serving women Parliamentarians.

Other book launches: Ryan Lobo’s ‘Mr Iyer Goes to War’, Arshia Sattar’s ‘Pampa Sutra’, and Luis de Assis Correia’s ‘Portuguese India and Mughal Relations (1510-1735)’. De Assis Correia may be a travel agent but he is an ardent historian with a passion for unearthing Portuguese history in India. Engage him in a conversation and he reveals such nuggets as ice was carried all the way from the mountains of the Himalayas to preserve the pineapples Portuguese diplomats gifted Emperor Akbar! Along with mangoes, pineapples were also much relished at the Mughal court.

According to him, but for a Dona Juliana Dias da Costa who maintained  cordial relationship with the Mughal emperor Aurangzeb Alamgir, Goa would have long since become a district of Maharashtra when Maratha Chatrapatis Sambhaji and Sahu invaded the tiny coastal state. His book offers a riveting read for anyone interested in Goa’s and India’s Portuguese history.

Several sessions dealt with media under siege, and journalists making their presence felt were Josy Joseph (national security editor of The Hindu newspaper, perceived as one of India’s best journalists) of ‘A Feast of Vultures: The Hidden Business of Democracy in India’, Rana Ayyub of ‘Gujarat Files’, Ben Judah of ‘This is London’, ex-Caravan’s Supriya Nair and art critic Meera Menezes contributed to the conversations along with Cyprian Fernandes whose forte is African journalism.

Some earlier scheduled book launches didn’t take place and namely, we missed travel writer and cook book author and photographer Naomi Duguid’s latest offering ‘Tastes of Persia: A Cook’s Travels in Armenia, Azerbaijan, Georgia, Iran, and Kurdistan’ – did she come at all? This writer is a keen researcher in home-cooked traditional cuisines around the world and her books are a magnificent feast for the palate and senses.

Goa has quite a number of poets and poetasters and the English poetry sessions were considerably livened up with the participation of internationally recognised professor emeritus and poet from Singapore, Edwin Thumboo (who’s been generously hosting poetry and writers’ festivals in Singapore for many years now), along with India’s Jerry Pinto  and Ranjit Hoskote who have arrived more or less vis-à-vis name, fame, and undoubtedly fortune will follow.

Jerry Pinto is remembered for his sensitive biographies of the late Leila Naidu Moreas, Hindi cinema’s legendary dancer Helen and his novel ‘Em and the Big Hoom’ which has received rave reviews, winning several awards.

Hoskote has contributed in no mean measure to art criticism, curated art shows and has several poetry collection worth reading but not in a hurry. He has a  Sahitya Akademi translation award among others. Mumbai-based octogenarian Gerson da Cunha is an education on how to live actively and positively. This former PTI-Reuters and advertising man has contributed indefatigably towards promoting civic consciousness in the maximum city. Catch up with his collection of poems titled ‘So Far’.

Graphic novels seem to be catching and charming everyone’s literary imagination these days. The much admired and very successful graphic novelist Amruta Patil attended this year’s GALF and everyone jammed up to listen to her sessions and perhaps get her autograph on one of her truly wondrous graphic novels – there’s ‘Kari’ (2008), ‘Adi Parva: Churning the Ocean’(2012) and this year’s ‘Sauptik: Blood and Flowers’. Patil combines writing and painting with distinction and her combo novels are something many young writers want to copy, for graphic novels as a genre are contemporary now and much easier on the eye and mind. Her novels churn up familiar Hindu mythological sagas with enchanting artistry and robust, appealing-to-funny-bones narrative, to tell a gamut of  complex interweaving stories. Her brushwork is exquisitely beautiful to match with her irreverent style of narrative, a real contemporary treat, genius quality.

All this and much more by way of a liberal and liberating festival at this year’s Goa Arts & Literature Festival at the International Centre Goa, the perfect place for such a festival.