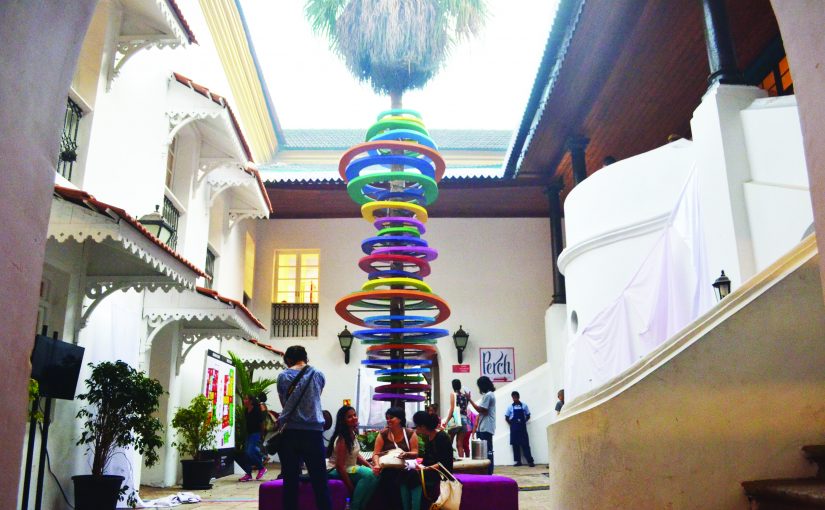 PALM ART: What a way to treat a live tree! At the Adil Shah Palace courtyard is an installation which sees grotesque plastic bangles on a palm tree! (Pic by Gourish Poke)

AT THE best of times, my dears, the aam aadmi has little time for festivals of the arty crafty type to develop mind and soul. But this is not to say I don’t approve of festivals like the week-long Serendipity Arts Festival currently in town. Such festivals are by the khaas aadmi and for the khaas aadmi who has all the luxury to get bored of life. If that sounds a little churlish, I take it back with some good things to say for whatever it is worth.

I’d say the Serendipity Arts Festival is welcome as an alternative to replace the killer trance, drugs and casino festivals of Goa any day. I say this after a dekho of the festival in bits and pieces throughout the week. A friend asked what the name meant and I was quite vague about it, so looked it up. Oxford dictionary says it means “the occurrence and development of events by chance in a happy or beneficial way, as in a fortunate stroke of serendipity”.

The word was coined by one Horace Walpole in 1756 after a story of three princes of Serendip who kept making discoveries by accident and sagacity, of things they were not seeking but found to their benefit. The organisers are determined to have it in Goa annually for “Who doesn’t want to come to Goa?” (quoting Preeta Singh, the driving force behind the festival).

I still think in Goa such festivals are a bit like our khaas aadmi government singing its swan song – ‘here, all you pathetic aam aadmi. If you have no cash you may as well enjoy some art, music and literature and become culture vultures! Also say a very nice thank you to all the khaas aadmi who have curated the Serendipity Art Festival.’ It’s a bit like if there’s no bread, eat cake. It’s a syndrome coming into India courtesy modern-day economic slavery imposed by very khaas aadmi indeed – with much camouflaged dramabaazi of course than in the old days. Slavery is slavery, be it economic, religious, social, cultural or all rolled in one. Just think about it, that’s all and come to your own conclusions.

Needless to say, Serendipity too competes for a footfall count along with the International Film Festival of India in wooing more folk to come and holiday in Goa. There’s one flaw. For those who reside in Goa, it’s no holiday or picnic and Serendipity’s platter of plenty by way of yesteryear’s and today’s contemporary arts and crafts – and everything else thrown in to stimulate mind and body – has to be appreciated in between domestic and workplace chores. That’s also how it is for me in the small media whenever IFFI or any other festival comes around.

MOST Goans don’t have the time to engage with a day-long or week-long festival, although much of it may be in the evening which is bad for Goa’s public transportation system is pitiful. It’s ironic that Goa wants to become the capital of India as a destination for all kinds of festivals and celebrations, but still has to catch up with something as primary as an economical, eco-friendly transportation system! The result is increasing traffic jams on indifferently built and serviced roads with an all-time high mortality rate vis-a-vis road accidents.

Also, there are few modern sewage and garbage disposal systems in place contrary to outsider perceptions. Goa is still a state of towns and villages and at this point both are coming together recklessly in one mega urban conglomerate (with the BJP government hell bent on urban progress and development minus infrastructure).

Goa will undoubtedly cease to be the Goa we love to run away to for a holiday. It will become as much of a toiling urban nightmare as Mumbai, Delhi and Bangalore where the air is no longer worth breathing. I have no doubt that one of the reasons Mumbaikars, Delhiites, and Bangaloreans want to open shop in Goa is because they want to come breathe in Goa at least part of the year. It’s also one reason why everyone wants to party here, have their festivals here and own a piece of real estate.

If you’re really asking me, my dears, much though I enjoyed some of the Serendipity Art Festival, what I’d really like to see happen is for the Adil Shah Palace (the oldest building in Panjim) to be converted into a historic memorial. I wish the same for the old Goa Medical College – this grand heritage building deserves better than being turned into an entertainment centre. It is the oldest medical establishment in Asia and the alma mater of so many of our distinguished medical fraternity. It deserves to be converted into a hospice and day health centre for the people of Panjim, a memorial heritage building to be taken care of and not for having IFFI festivals and other entertainment like the promotion of booze.

They are promoting feni and wine in one corner of the old GMC complex as part of the Serendipity Arts Festival! Panjim’s old GMC complex deserves to be put to some memorial usage rather than sundry shows to entertain people!

This way we remember the old GMC for its distinguished medical record and similarly the Adil Shah Palace for the badshah Adil Shah; the Muslim history of Goa is tied up with it and Muslim history has as much a right to be remembered as Hindu and Christian history, good, bad or ugly.

History always comes with mixed emotional messages but it is education at large. The more we study it and keep in touch with it, I dare say the less we may repeat bad or terrible history! The Adil Shah Palace is history and while out there after a long last week I found myself wandering around trying to capture some of its past memories. Who was badshah Adil Shah of the Bijapur sultanate? What happened to his palace? Go find out! Thinking about all this I barely paid attention to the Serendipity art and craft installations everywhere!

What a fabulous broad wooden corridor or verandah running all around –which at the moment serves as a Serendipity cafeteria – to give grand Mandovi river views. After “conqueror of the spice trade” Afonso de Albuerque ransacked, slaughtered and occupied Adil Shah’s summer palace in 1510, it came to be called the Idalcaon Palace and served as a residence for Portuguese viceroys; after Goa’s Liberation it served as the State Legislative Assembly for many years before the Porvorim complex came up.

It is clear the palace has been maintained indifferently and water drips away at one corner, the bit of garden around the palace is a mess – a glorious African tulip tree is blooming away, and inside the palace a lone palm tree (a date palm?) still lives. I wonder how old the tree is.

They’ve converted this living palm tree into an art installation with plastic bangles all around it. Gross, my dears, I hate live trees being treated like this. In my book it is always hands off all live trees no matter old or young. Leave trees alone and let them grow freely. I’ve nothing against modern usage of heritage buildings for worthwhile purposes, especially to raise funds to maintain the building like it deserves to be maintained. A bankrupt government won’t do it of course.

Hence, I support the genesis of the Serendipity Art Festival, but I don’t think this festival is about raising funds for a public cause. I fear one of these days some crorepati will get his hands on both the Adil Shah Palace and old GMC building, raze them to the ground to put up modern blocks of entertainment complexes, multiplex malls or a real estate project for the millionaires of the world to invest in and at the same time keep political pockets fattened. If only one chief minister would decide once and for all to restore the Adil Shah Palace and the GMC to their rightful dignity as memorial heritage buildings and not to be tampered with for commercial gain. I keep my fingers crossed, my dears.