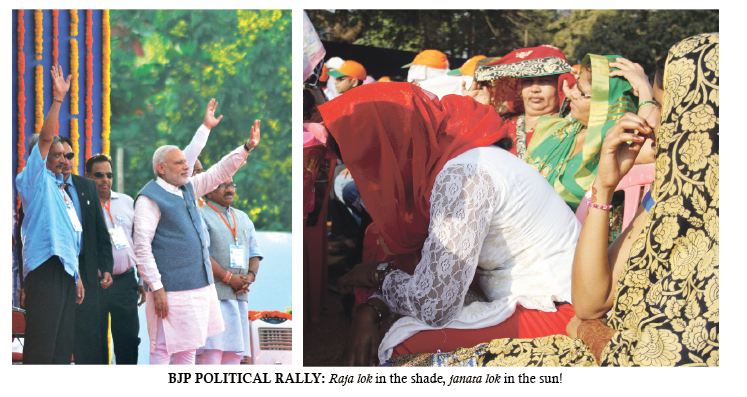 While politicians sat under the shade, the aam aadmi sat in the burning sun…

RALLY politics can be very hard for the aam aadmi and should be discouraged. It was a three-hour cookout for all the ‘Laadli Laxshmis’ and ‘Raja Rams’ who came for a darshan of prime minister Narendra Modi in Goa on Saturday, January 28 at Campal football grounds. The gathering was largely of converted Bharatiya Janata Party (BJP) beneficiaries and probably well-paid for (`500 one source alleged). Perhaps that’s why raksha mantri Manohar Parrikar quipped in one of his speeches to collect from everyone but vote for BJP, much like Aam Aadmi Party (AAP) chief Arvind Kejriwal! VIP culture is the fastest growing culture in India.

The khaas aadmi politicians had a shaded high stage from which to make their electoral promises (not short and sweet, our politicians love the sound of their voice), while we, the aam janata who vote for them, were warned to come early – by 3pm – to occupy the rows of  plastic seats baking in the sun and wait for the action to start. Modiji came at 5pm by helicopter.

Do you know what it is like to sit in the naked burning afternoon sun for more than three hours? A salute to all those women, children in tow, who perspired it out to shout slogans and clap at the right moments. Desh ka neta  kaisa ho? Narendra Modi jaise ho!

Unable to get a pass for the media enclave for a closer look of the VIPS and VVIP Narendra Modi-ji, a few small media folk were forced to park their vehicles in the vicinity and hotfoot it to the aam aadmi class seats  – far, but not too far away to get briefed about what the BJP intends to do if voted back to power! Much of it was repeat play.

Manohar Parrikar, Shripad Naik, deputy chief minister Francis D’Souza, Vinay Tendulkar, Narendra Sawaikar, the entire BJP ministry was up on stage with lone woman Kunda Chodankar (president of the Mahila BJP). When chief minister Laxmikant Parsekar took the mic to wax lyrical over BJP’s achievements and challenges ahead, the drone of a helicopter in the background announced Modi’s arrival and everyone disappeared to receive him leaving poor Parsekar-ji to gallantly finish his speech before what has been estimated to be a 25,000 to 30,000 gathering. The BJP leaders returned with the prime minister. Then it was over to Modiji attired in his trademark white kurta-pyjama, and charcoal grey jacket this time around.

Never mind the cheers when he started his speech in his by-now standard Konkani greeting of “tumkam sogleyank mayemoga cho yevkar.” The 30-minute speech in shudh Hindi was laced with promises to turn Goa into the most comfortable state in India. There’s only one condition. In the name of stability, give BJP a majority vote in the state polls. He said Goa suffered from a disease called instability and asked the people, “Do you want instability, 12 chief ministers in 10 years (from 1989 to 1999)?” No, roared the enthusiastic crowd. It was a win-win situation with this audience.

Vote for BJP and Goa may look forward to more tourism, more bridges, more of everything that Goa hasn’t got in 50 years or so of frivolous Congress party rule. At one point he said “Mera Goa” must be the iconic state for other larger states to emulate. There were the usual potshots at veteran Congress and lately-arrived Aam Aadmi parties. Mercifully the speech wasn’t too long and the Modi cracked a joke looking at raksha mantri Manohar Parrikar, saying he was a strong defence minister, and he dared not break an aviation rule which says he must return to his helicopter before sunset.

After his departure, it was a melee for everyone to get out of the bamboo and steel barricades which are now the hallmark of every political rally to keep people in their place. At one point, near a water distribution corner, everyone scrambled to get a bottle to quench their thirst in the merciless sun and chuck the empty bottles below their chairs. Women draped their faces with saree pallus or dupattas, men put handkerchiefs or newspaper sheets on their heads.

At the entrance, security checked bags and attire for hidden water bottles – apparently a security risk. One volunteer wanted to confiscate the broad shady khas grass hat a woman was wearing but when she pointed at the sun and said, “I may faint in that heat and then you will have to take me to Campal Clinic nearby”, she was allowed to keep it. Incidentally, the Campal Clinic road is now as smooth as Hema Malini’s cheeks! A transformation to see. If only roads across Goa could always be this smooth.

Back to Modiji. He is undoubtedly an engaging orator, although one may lose interest every now and again for his promises are old and familiar, much of his Hindi is difficult and many Goans may miss its finer vocabulary and nuances. The only peppering of English words were “comfortable” and “iconic”, a word many wondered about – yeh iconic gift kya ha? The bottom line is that the BJP and Modi-ji are the greatest! Blame the Congress for the country’s ills and credit the five years of BJP rule for rescuing people from the mess created by the Congress.

Modi-ji said never has Goa been so blessed by funds in the BJP Goa kitty. No other state has so much financial aid from the centre. Maybe if Modi-ji had come by road to the venue he would have seen the broken roads, dangerous kerbsides of capital “city” Panjim where so many Goans young and old lose their lives annually! Maybe he would have seen the broken, filled with garbage, gutters, and the iconic St Inez nallah, reflecting the cesspool that politics has become in India in the last 68 years of independence.

Funny, in all these years of brashtachar (corruption), the voting public has not caught on to the fact that for government after government, the public kitty continues to pine for funds for quality development and progress – but there is no shortage of funds for elected government representatives to grow obese, wear the most expensive khadi attire ever and spin out bhashan after bhashan to throw dust in aam aadmi eyes. Goodbye, Modi-ji, hope you enjoyed your break in the country’s most comfortable state, rapidly becoming less and less comfortable for the many who live and want to live here!