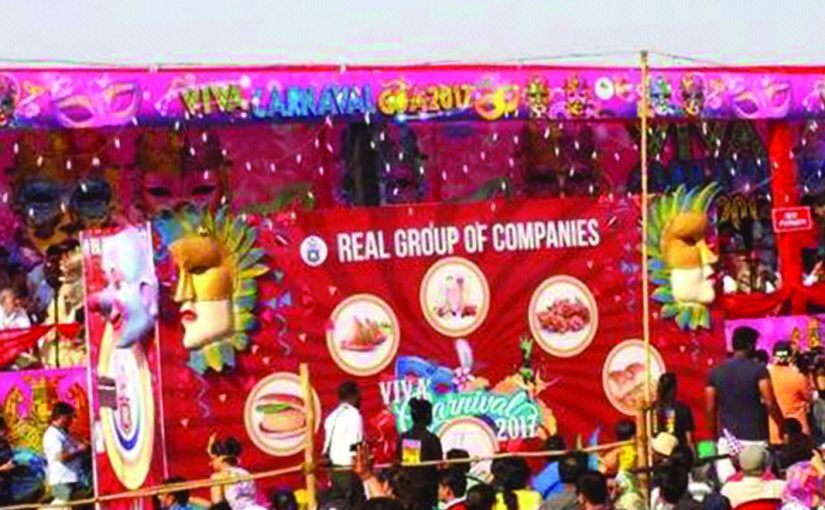 COLOURFUL CARNIVAL: Following the end of a vibrant Carnival season, the Panjim Carnival Committee announced the prize winners of the float parade in Panjim. Real Group of Companies was named the winner in the Commercial Category for their float of a dance and music band alongside the display of Real Soft Drinks bottles in a unique style. The float was designed by Jurgen Francisco Martins

The BJP in 2012 came to power in Goa on promises of good governance, transparence in administration, zero tolerance to corruption. But despite a very clear mandate, this government which promised parivartan goofed up with U-turns on almost every pledge. Over the last five years it has been a story of unabated corruption with the government violating and circumventing every possible law. The abuse of power by the government has been like never before.

Despite being advised by the law department to hold a session of the Legislative Assembly in November and after being advised in January to dissolve the assembly, this government – to somehow hang on to power towards the fag end – attempted to high-handedly breach even the basic provision of the Constitution by trying to avoid holding that required  session. But after judicial intervention, as was expected, it has held that five-minute sham session which was nothing but a murder and mockery of democracy.

Having personally witnessed the working of successive governments over the last four-and-half decades, I can confidently state that this government has been the worst Goa has had since Liberation.

The people of Goa have over the last five years witnessed all the acts of omission and commission by the BJP government. In a democracy the people are supreme. In a dictatorship… We shall know the verdict of the people on March 11 when the votes are counted! Will Goa deliver 40 worthy MLAs? Will it be sunrise or sunset for Goa?

I WOULD like to condemn the goons of Akhil Bharatiya Vidayarthi Parishad (ABVP), the students’ wing of the  RSS-BJP-Sangh Parivar, for unnecessarily unleashing unprovoked violence by pelting stones at students who turned up for a seminar at Ramjas college, where JNU PhD students Umar Khalid and Shehla Rashid were invited. Khalid had backed JNU student Kanhaiya Kumar (accused of allegedly raising anti-India slogans) and was  invited by the college’s Library Society to speak on a subject related to his PhD, which he is doing from JNU – his topic at the seminar being ‘The War in Advasi Areas’.

What was wrong with inviting these particular students to Ramjas college? The one thing I know about this BJP-supported students’ wing is that it has the habit of spreading lies and indulging in violence in many prestigious universities in India as if it is their birthright by branding everyone anti-national. The BJP-supported ABVP won’t debate or discuss along accepted norms; it only wants to silence any dissenting voice with threats of violence.

I think that we Goans/Indians should henceforth keep extra vigil on such BJP-supported students’ groups waiting to take over campuses to unleash communal politics by influencing other students into becoming dumb puppets or into circus animals to be controlled by violent threats!

Anyway, three cheers for Delhi University Kargil martyr’s daughter  Gurmehar Kaur for taking a strong stand against such disgraceful hypocrites, the real enemies of India, and for daringly challenging their sick ideology through Twitter. We need more students to take on such people who are really anti-nationals! Let’s stop them from taking the law in their hands and from abusing those who don’t share their viewpoints for political gain. Long live freedom of speech!

THE season of Lent began on Ash Wednesday, March 1, with a reminder that dust you are and to dust you shall return. During this season we are reminded of God’s divine love through the Stations of the Cross which focus on our renewal and reconciliation. Lent invites us to surrender ourselves to God and reconcile in his love. Our penance should be to reach out to people and touch their lives, by regularly visiting the sick and the disabled, the orphans and the aged.

Lent helps us build stronger relationships with God, our family and friends. It helps us to encounter God in our daily hopes and struggles, joys and sorrows, anguish and suffering, and empowers us to understand that life is a gift and a challenge. Participating in building God’s kingdom means taking part in the death and resurrection of Christ. Many parish associations are always short of members and volunteers who will empower and enrich their association and reach out to people.

To make our Lent mission more meaningful, let us not only contribute monetarily towards Lenten alms, but also with our time and talent towards the renewal of church, society and ourselves. Let us help those who have strayed away to return to God. As we observe fast and abstinence, also abstain from speaking ill about anyone or use foul language which ruins relationships. Speak not rudely, but help!

Let us ask pardon for wrongs done and spread the message of reconciliation and peace to all around us and thus, give Jesus Christ to the people in the form of his body and his blood