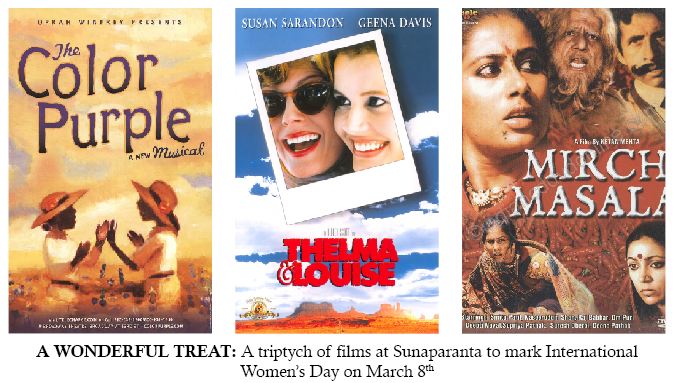 A WONDERFUL TREAT: A triptych of films at Sunaparanta to mark International Women’s Day on March 8th

WHAT a long way women have come and I’m not sure if they have arrived yet! It’s not only men but women too who specialize in U-turns! To arrive would be reach a place which is happy and harmonious and where men and women respect one another enough not to abuse, bully or take each other for granted. I tell myself the worst is over but in India, Middle East, South East Asia or even Europe and the USA, the same old story continues. Women continue to be second or third class citizens of Mother Earth!

I found myself asking a whole lot of comparative questions anew last weekend after seeing two mind-numbing films, mercifully one more positive than the others, at the Sunaparanta amphitheatre up at Altinho in Panjim. Altinho is my favourite place to wander around and it is really something sublime to see a film outdoors under the sky like this, when night is falling and pensive birdcall in the air courtesy some grand trees standing around, fabulous artwork etched against the backdrop of an ever darkening sky and if one takes a walk the scent of raat-ki-rani and white and rich pink champa tease the senses from somewhere. It’s cool and the amphitheatre fills up by 6.45 pm when the film starts rolling.

There’s a film club at Sunaparanta if you’d like to join up but on this occasion they were celebrating International Women’s Day right through March but March 31/April 1 & 2 weekend the screenings were free because the films were three women-defining films – namely, The Color Purple, Thelma and Louise and Mirch Masala. All three films focus on the life and times of women in times gone by and right up to this day. If you haven’t seen these films, my dears, you just haven’t lived (that’s what I always like to say).

Men young and old should see the films if they want to understand, sympathize/empathize with women. But how many men want to do that even in our reputedly enlightened times! As far as I can see all around me women are still in trouble here and there courtesy men around them who see them but don’t see them — mothers, wives, sisters, daughters, girlfriends, etc. As far as the majority of men are concerned, women may continue to be second and third class citizens of Mother Earth. In my experience even the best of educated men (the ones I grew up with and fortunately or unfortunately love/adore/respect) suffer from streaks of exasperating male chauvinism.

The Color Purple is a 1985 film based on Alice Walker’s Pulitzer award-winning novel of the same name and has a grand canvas bringing to life all the afflictions plaguing the southern black women in USA at the turn of the 19th century. Incest, domestic violence, paedophilia, poverty, racism, sexism, it’s all there. Whoopi Goldbert plays the lead role of Celie whose stepfather keeps raping her as a  14-year-old girl and then hands over to another man much like him in a farce of a marriage. White women in USA may have enjoyed a superior status but not the black women who were more at the mercy of male  exploitation, abuse, insensitivity and little gratitude.

I DON’T have to tell you all this and even post-women’s lib women don’t know how to hold their own vis-à-vis the men in their life to be happy. The “womanism” of this film is shocking. There’s strong-willed Sofia (Oprah Winfrey in her debut role) who makes the mistake of saying “Hell, no!” to the white mayor’s spoilt hysterical wife who wants to hire her as a maid, and for saying “Hell, no!” repeatedly, she gets shot, arrested and put in jail, the jail sentence being to be in the service of the mayor’s wife. The film’s all about how to kill a woman’s spirit till she is down on her knees. In an unequal society, black men, as well as white men and women, pull the strings.

The black women survived by supporting one another with music, forgiveness and somewhere along the way find their own identity as free women. Time and the years take their toll and Celia is too good to be true but true she is. Don’t know what the plight of black women is in the US of A today, much improved I dare say, but the black woman’s plight is still more or less the plight of many women in India today despite all the overt and covert male rhetoric of Bharat being so mahaan!

THEN there’s the plight of modern-day American white women! In Thelma & Louise (1991 film) we have Thelma (Geena Davis) as a bored housewife putting up with a boorish husband and Louise (Susan Sarandon), a waitress with a musician boyfriend whom she has a hard time trusting, Both women share notes and are good enough friends to plan a runaway weekend break for themselves – a wild ride out of town in a breezy Thunderbird convertible. In the process Thelma wakes up to grim reality (her marriage is no marriage) and Louise, the wiser one, still can’t make up her mind about her boyfriend. While on the road both women get into trouble of the criminal kind, wilfully and not-so-wilfully, mostly in self-defence, and a series of unfortunate chain events or perhaps mishaps.

Rather than end up in prison they take the decision that they’ve had their “fun” and life is not worth coming back to. When cornered by police chasing them they hold hands and laugh and literally drive off into the Grand Canyon, preferring to choose death over life with the kind of male society they have to put up with.

The film impacted me so much the rest of the night at home I wondered if I was a Thelma or a Louise in my own life, my dears! How many women live daily with some kind of a fatalistic death wish? To die or not to die, and how to die, like that. It’s pretty boring and sad.

Mirch Masala is more familiar to us in India and cheered me up no end. For here is Sonbai (a role played by Smita Patil) who gives women a lesson in putting up a fight for their rights. I must say the film concluded the women’s mini-festival of films on a positive note. I mean, why give up? Think out of the box constantly and there will always be ways in which a woman may deal with the male of the species! That’s the message of The Color Purple too. A  friend seated next to me exclaimed, “I leave my husband alone to do whatever he wants, and I have my own life to live and enjoy!”

Well, why get married them? Get married only if you want to have children, she snapped. Also, why have children? The world’s full of children who can do with parents of the sharing and caring kind, who need vital lifting up from the abject misery of their poverty. Mera mahaan Bharat is still steeped in poverty with poor children, poor women, and yes, poor men too, growing up in slums. Nobody deserves to grow up in a slum, you have no idea what it does to their psyche.

This is to say if you’re a man don’t take things at face value, be kinder to the women in your life! Don’t think of them as miserable, helpless possessions to use and abuse at will until you get tired of one, two, three…in short, don’t be like the tyrannical womanizer subedar (Naseeruddin Shah) or hypocritical mukhi in Mirch Masala. The late Smita Patil as Sonbai is unforgettable. Women are not consumer items but human beings and being women does not make them second or third class citizens of Mother Earth! I always think that if parents respect their daughters, their sons also would, and the end result would be more space for women to feel like they’re happy to be women.