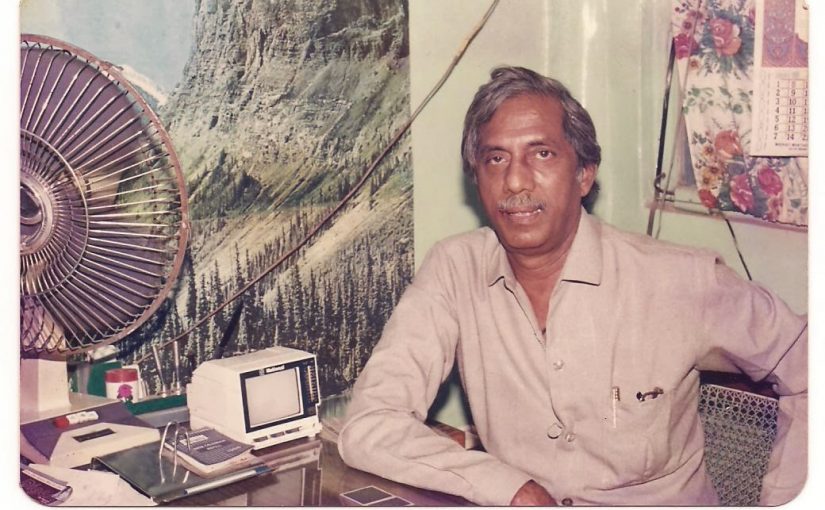 HAJI MASTAN: Mastan was the first celebrity gangster of the city of Bombay. He would be often seen rubbing shoulders with politicians, Bollywood actors and actresses and businessmen at parties and functions. His unique traits of dressing completely in white clothes, wearing white shoes, smoking costly cigarettes and driving a white Mercedes made him a “style icon” among the poor and uneducated Muslim youths in the ghetto areas of south Mumbai

In the ‘70s the underworld played a major role in financing films. There was close interaction between the don’s and films stars. The author is a veteran film journalist who worked for “Screen”, the film weekly of the Indian Express Group for over 40 years

Recently when I received a copy of a film magazine I was contributing to for 10 years without a break, I was shocked to see the cover. It carried a very different kind of ad for a film called “Dongri ka Raja” with only the names of smugglers and dons who ruled Bombay in the sixties, dangerous names like Haji Mastan, Karim Lala, Vardarajan Mudaliar (popularly known as Varda Bhai), Dawood Ibrahim and Arun Gawli.

Every name evoked memories of these men who made the underworld their own and ruled the world above their world with their frightening and ferocious ways. Reading these names brought back memories of rare encounters I had with them – villains to many, but also heroes to those who admired their way of functioning in the most modern city of India.

I first saw Haji Mastan Mirza at an Eid party hosted by the legendary Dilip Kumar at his 34, Pali Hill bungalow, once owned by the beautiful actress Naseem Banu and passed on to her equally beautiful actress-daughter Saira Banu and son Sultan (who died recently, sometime after his beautiful wife Rahat). I also saw Karim Lala there. There were people from every field of life, from saints, to those who were branded as sinners, and beautiful women who were all friends of Saira Banu and admirers of “Yusuf Sahab” as  Dilip Kumar was known.

I WAS surprised beyond words to see how the most dreaded men in the city, Haji Mastan and Karim Lala, sat at the feet of Dilip Kumar and kept singing his praises, with the legend being as friendly as could be to them. I even wondered if these two men were the same denizens of the underworld whose names spread terror not only among common people, especially the rich and powerful, but even among the police force, whose attempts to nab them and end their draconian and devilish empires consistently failed.

It was a sight to see these men who made headlines with their dastardly deeds and crimes, sitting with the legend and enjoying the “biryani”, the highlight of every Eid celebrated there. They talked and embraced each other like brothers who have been lost and found in Hindi films. Dilip Kumar (now 94 and a victim of dementia) even inspired them to speak some dialogues from his films and hum a few of his popular songs. These men were very different from the image they portrayed of criminals involved in nefarious activities who play with lives, some of them innocent.

Soon, all the big smugglers of Bombay, headed by Mastan, surrendered before the great socialist leader who had single-handedly taken on Mrs Indira Gandhi and her declaration of Emergency in the country, Mr Jayaprakash Narayan at a public meeting in New Delhi. This made headlines globally. It seemed like all illegal activities would come to an end with their surrender, but there were others like Dawood Ibrahim, the son of a police constable, his brothers ,and many others who continued to hold Bombay, as it was known, and the film industry, to ransom.

I MET Mastan on two more occasions. The first was at the launch of a film by actor Sanjay Khan. The muhurat was at 10.30 am and the bar was thrown open. All the liquor vanished within half an hour. Around 11.30 am a tall and lanky man dressed in white and wearing white chappals entered the hall at the now defunct Centaur Hotel in Juhu. Sanjay Khan and all his brothers ran to welcome this man who was none other than Mastan, the same man I had met at Dilip Kumar’s Eid party. Even though all eyes were riveted on this special guest I made a bold attempt to introduce myself and he was very humble and soft-spoken. He told me he had started his own political party called “Dalit Mukti Sangharsh Morcha” to serve poor and downtrodden men, women and children. He handed over a well designed, green and gold visiting card embossed with his name, Haji Mastan Mirza, in golden letters. He asked me to approach him anytime I had a problem. I wondered if I would meet him again because there was something very good about this man who was only known for his black and deadly deeds.

I WAS destined to meet him again at the launch of a film called “Inspector, Daku Aur Woh” which was produced by one of his former smuggler friends, N.P Ali and was to be directed by R.K Nayyar,  husband of the late actress Sadhana. Sanjeev Kumar, Randhir Kapoor and Ranjeeta were the stars. Many celebrities drove down from Bombay all the way to a village called Aptegaon for the launch. Mastan, the chief guest, drove in with a convoy of cars following him. The moment word spread about his presence, the whole gaon (village) swarmed the place to catch a glimpse of the man they had only heard of, emphatically proving that he was the star among stars. On seeing this, Randhir Kapoor, known for his witty remarks, said, “Who says we are stars? Looking at the craze he commands we look like junior artists” and Sanjeev Kumar was the first to agree with Randhir.

Mastan continued to do a great deal of social service. Films like “Deewaar” were inspired by his life and his friend Mukri, the comedian, was even given the permission to make a film on his life called “Mastan”, but the unusual hero did not live to see the making of the film. He died of a massive heart attack. There were thousands of people at his funeral. The police expected scenes of violence but it was the most solemn procession I had seen. That marked the end of a never to be forgotten chapter in the history of Bombay, which would be renamed Mumbai years after his death.

I HAD my first and only encounter with Varda Bhai during the Ganesh Utsav at Matunga which was organised with his support and guidance. When he entered the mandal dressed in a lungi and a simple white kurta there was silence all around. The dancing and noise started again only after he left.

There was a brave inspector called Y.C Pawar who made it his mission to catch this criminal who was a master at creating fear in the minds of people. Pawar put the fear of God in Varda Bhai and he fled to Chennai, his native place, where he died suddenly. His empire of crime crumbled in Bombay. His life was made immortal in two major films, Mani Ratnam’s “Nayagan“ with Kamal Haasan playing him, and the other, “Dayavaan”, with Vinod Khanna playing him, directed by the flamboyant and fearless Feroz Khan.

The only time I had a close brush with Arun Gawli was when he came out in open support of an actress called Preeti Jain who had accused Madhur Bhandarkar of raping her several times with the promise of casting her in one of his films. I saw Gawli as a politician when he stood for elections from the Dagdi Chawl area of Lalbaug.

The only don I did not encounter has been Dawood Ibrahim and I have to be satisfied with different actors trying to play him in films made on the crime scene in Mumbai in the nineties and later films based on the 1993 Mumbai bomb blasts.

I AM waiting for the day when Prime Minister Narendra Modi keeps the promise he made before he came to power, to bring Dawood back from wherever he is hiding I don’t understand how an entire government and all the agencies working against terrorism have still not been able to lay their hand on Dawood, who everyone knows lives in Pakistan enjoying the kind of life that can put our stars and the sheikhs of the Gulf to shame.

I have had encounters with many other dons of Mumbai, but they have nothing of the power, the aura and the mystery behind their power like Haji Mastan, Karim Lala, Varda Bhai and other dons of the ‘60s. There have been many attempts to make films based on their lives and times, but none of them have been able to get it right, except for Yash Chopra and Amitabh Bachchan making a “deadly” combination to re-create the life of Haji Mastan, but within the format of commercial Hindi cinema.