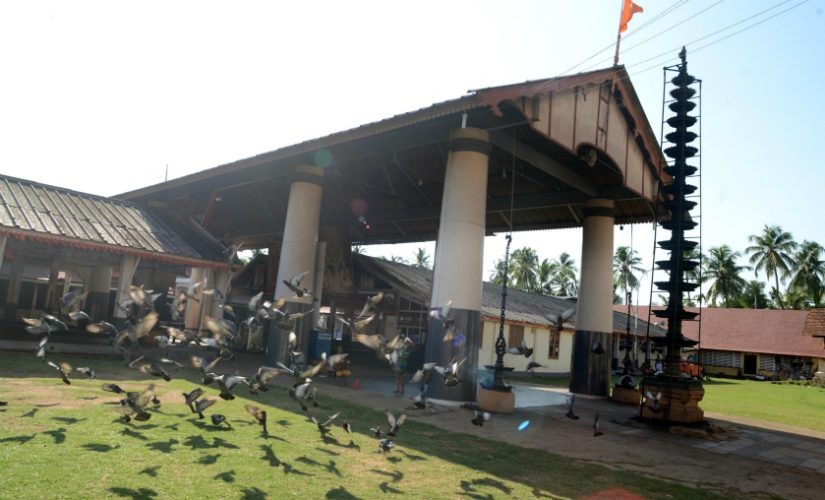 FLOURISHED: The Saraswats who migrated to Kochi not only flourished but even built their own temple. Like Saraswats in Goa they also entered into business. (Thirumala Devaswom temple. Photo courtesy: Rajesh Kumar)

Goans who settled in Kochi following the persecution by Adil Shah and subsequently by the Portuguese, were the first to use the weapon of hartal against the then king of Travancore. Both the Left and Mamata Banerjee have the Saraswat Brahmins of Goa to thank for teaching them how to organise a strike!

KERALITES greatly value the contributions made by the Konkanis in various spheres of their life ever since they started migrating to the southern state from the 11th century. But many grudge the ethnic community for introducing a disruptive form of protest in the state.

The hartal, they organised in protest against the illegal demand of a huge sum of money by the King of Cochin for the royal treasury in 1791, was later adopted by Keralites as their most favourite form of protest. The trade and industry in the state today consider hartal as one of the major hindrances in the development of the state.

Historians, however, do not blame the Konkanis for shutting down their business at Vypeen and Mattancherry after the King sought 30,000 varahams (then currency) from Thirumala Devaswom, an important socio-religious organisation of the Gowda Saraswat Brahmins (GSBs).

They view it as a spontaneous reaction against the persecution by King Raja Rama Varma, who massacred a large number of Konkani merchants after the Devawom refused to part with its wealth. The King then plundered the shops of the merchants and looted the temple.

In fact, historians say that the Konkanis are one of the most persecuted communities in India. It was the persecution by the Mughals and Portuguese that forced the Konkanis to flee their homeland in the country’s south western coast. The first batch of Konkanis came to Kerala in 1294, when Allauddin Khilji attacked Goa, according to noted Konkani writer, historian and activist, Narendra Purushottam Mallya.

Another exodus was triggered by an inquisition carried out by the Portuguese in accordance with a Papal bull in 1560. Mallya told Firstpost that a large number of Konkanis were forced to flee to different parts of the country after they were given the option of either converting to Christianity or leaving their homeland.

“We feared they will convert us forcefully, kill our language, culture and religion. Unable to bear the torture, atrocities and persecution we left our homeland,” said Mallya, who was honoured by the Government of India with the Padma Shri in recognition to his contributions to the community.

Mallya, who initiated a movement for the promotion of the Konkani language, said that the Konkanis who reached various parts of Kerala were also persecuted by the local kings and people. A group of families which came to Kozhikode were denied shelter by the Zamorin, a Hindu ruler.

The refugees who came to Kochi were allowed by King Veera Kerala Varma to settle down in the kingdom. He allotted an area behind his palace at Mattancheryy called Cherrlai to the Konkanis. However, his successor Raja Rama Varma forced them to flee to Thuravoor and Alappuzha in Travancore Kingdom.

They were not even welcomed by the locals in many places. They were denied entry in temples by Namboothiri Brahmins, who considered themselves superior to the refugees, who were called Paradeshi Brahmins. The boycott forced them to construct their own temples and live around them in agrahara (Keri) fashion. The community built 16 temples during the period.

However, many of them were plundered, some repeatedly by the kings and the Portuguese. A temple they built in 1599 was destroyed by the Portuguese in 1662. It was reconstructed in 1663 during the Dutch reign but the idol disappeared mysteriously in 1719. The temple was plundered again in 1791.

The migration of Konkanis to Kerala was thus marked by several trials and tribulations. It is recorded in history as the ‘great run’. The migration was led by Saraswat Brahmins. Sonars (goldsmiths), Kudumbis (manual workers), Vaniyars (traders), and Devadasis accompanied them.

Though the Konkanis have settled in different parts of the state, the major settlement is in Kochi. They have made the land allotted to them at Mattanchery their permanent abode. Today, there are 30,000 Konkanis in Mattancherry.

Thirumala Devaswom, which is called Gosripuram, is the socio-religious nerve centre of the Konkanis in Mattancherry. It also serves as the headquarters of all migrated Konkanis in Kerala. The Saraswat Brahmins live around Gosipuram, while the Kudumbis and others live in the periphery. There is an unwritten rule among the Saraswat Brahmins prohibiting members from selling their land or buildings to outsiders.

Though the Vaniyars represent the business community, the Saraswat Brahmins were forced to take to business as they could not find suitable jobs when they migrated to the city. Kapil R Pai, president of the Devaswom, said the upper caste members had excelled well in the business despite the lack of experience.

“With the help of the rulers and the Dutch merchants they flourished in their business. The rulers gave the Konkanis free hand in the business, which helped them control the trade globally. At one point of time, all major trade and business of Kochi went through their hands. This in turn helped Kochi to emerge as an international trade centre,” claimed Pai.

The Saraswat Brahmins are today one of the most prosperous communities in Kochi.

The Konkanis were also the first to start an Anglo-vernacular school in Kochi. The TD School they established at Mattancherry is today a major centre of learning in Kochi. Besides, they set up many other schools and colleges not only in Kochi but also in the nearby areas.

The practice of women wearing sari and blouse without a veil was brought to Kerala by Konkani women, according to Mallya. He said that the practice was embraced by most sections of women in the state. The beautiful elephant procession that later become an integral part of Hindu festivals in the state is also a contribution of the Konkanis.

While the Saraswat Brahmins have prospered, the benefits of their prosperity were not passed on to the Kudumbis, who had accompanied them in the migration.

Though the Saraswat Brahmins use their service in their business and homes they have kept them at a distance in social and religious spheres. A member of the community was reluctant even to take this correspondent to the place where Kudumbis stayed. He agreed only after some senior members of the community intervened.

P Raman, a Kudumbi, said lack of education was the major reason for the economic and social backwardness of his community. “Kudumbi families who were content with their traditional jobs have realised this and are now trying to give proper education to the children now,” Raman said.

He said that the Kudumbi Seva Sangham, which they formed recently, was helping the community in achieving economic and social progress. He claimed that the government of Kerala had recognised the community as Other Backward Community (OBC) because of their efforts. This, he hoped, will help them in accessing government jobs and educational opportunities.

Historian Balagopal TS Prabhu believes that the upper caste would not have made the progress they have made in the social and economic spheres without the hard work of the Kudumbis.

“It is high time that the Saraswat Brahmins recognised the role played by the Kudumbis in their economic advancement and share the benefits with them,” he said.