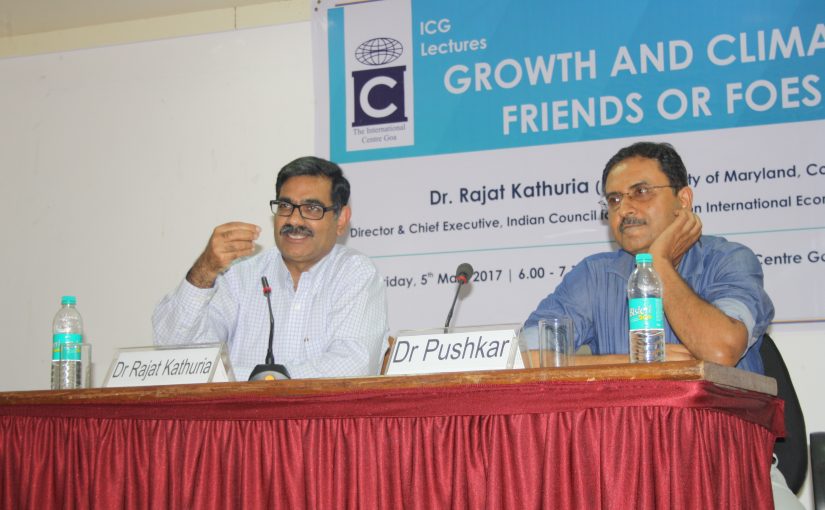 URBAN GROWTH V/S GLOBAL WARMING: Dr Rajat Kathuria (left) at the ICG talk cautioned against unsustainable urban planning in India. He said instead of following China we should follow Germany (which now gets 85 per cent of its power from renewable sources like wind, solar energy, and hydroelectricity), breaking a record amongst developed countries racing to achieve zero contribution towards global warming!

WHAT is more important, my dears? Money or a first class environment around you? Why shouldn’t the two be mutually inclusive?  Even the poor need and want a better environment! The rich may run away from dirty India/Bharatdesh for vacations every now and again to USA, Canada, Europe, Australia, New Zealand and the Asian countries (some of which like Singapore are very environmentally and eco-conscious, even once upon a time impoverished Thailand has cleaned up its act on the environment front)….but the poor in India are stuck in the one place they call “home” – perhaps next to the St Inez ganda nallah in Panjim (for example).

The media has been going on and on about what a health hazard this once upon a time fresh water creek has degenerated too, with folk actually living on its edges or in fine towering homes nearby, but who’s listening? Not the government authorities of the day which continue to live off the fat of our public exchequer. In India we continue to be oblivious to the importance of cleaning up our own backyard, front yard, neighbourhood, and perennially wallow in environmental degradation be it outdoors or at our own doorstep!

IS this lack of concern for the environment then in our DNA, to continue to flout and disobey laws and continue merrily to contribute to progressive collapse of our once life-giving environment? Is life in modern urban India no longer about cradle to cradle but cradle to grave? With the continuing urban population boom our deteriorating environment and parameters of primary health are reflected in unkempt roadsides, polluted water bodies, garbage-filled gutters, depressing gardens and public grounds….

It was with all these joyless thoughts that I went to listen to Dr Rajat Kathuria’s talk on “Growth of Climate: Friends or foes?” at the International Centre Goa on May 5, 2017. It is clear that from village to urban India neither our people nor our governments are interested in inner or outer cleanliness! The ruthless exploitation of natural  resources has a lot to do with it (that is why India is acquiring a reputation as a rich country with a lot of poor people). These days the political talk is how to outsource natural resources or auction them to the highest bidder…and the companies desi and foreign come to mine our hills, put our sources of fresh water in bottles, dirty our air, take over our crops to modify any which way they can to acquire monopolies of destruction and death.

Stephen Hawkins has predicted if we don’t contain global warming we have only a 100 years more to live off mother earth! Our civilisation is made up of more destroyers than creators/friends of the earth, because we are so biased in our haste to exploit all our natural resources to develop and progress into cities of concrete – this kind of structural transformation is very resource intense and ill-affects the environment (the primary quality of our air, earth and water). Why should industrialisation and urbanisation be the narrative of progress and development where we sacrifice the quality of the air we breathe, the water we drink, and the food we eat to stay fighting fit?

Something is fundamentally wrong if that’s how we define progress and development. Mr Dr Rajat Kathuria (director/chief executive at Indian Council for Research on International Economic Relations, Delhi) spoke of all this and how in the countries of the West today they’re returning to the cradle to cradle model instead of cradle to death mode urban, industrial lifestyles!

WHICH reminds me that we should look at Germany as our role model – they no longer source their energy from nuclear power plants and the Scandinavian countries are getting there, addressing issues of the environment and moving towards zero global warming. Global warming is serious. The kind of steel and concrete industrialisation and urbanisation we patronise contributes big time to it…if we continue to cut down our forests, poison our water resources, and breathe toxic air, we will die as climate change refugees — and don’t think it’s not happening in the Indian sub-continent.

It’s happening around the globe. Courtesy the kind of industrialisation and urbanisation we’re engaged in, it is not sustainable. China is discovering this and so must India quickly or by 2050 60 per cent of our population will be living in cities and we already know that public services cannot keep pace with such urbanisation, quality of infrastructure will continue to fall and deteriorate even as we try to upgrade our comfort levels with technology of generators, inverters, and bore wells. Soon there will be no ground water left!

Dr Kathuria said he grew up in Lucknow in Uttar Pradesh. It’s not the best of places for any expectations of quality of public services. With the degradation of natural resources, public services deliver less and less, and private services are counterproductive vis-à-vis the environment. Climate change is driven by growth of the urban model,  “night light data” tells us we’ll be way past 50 per cent urbanised soon and “75 per cent of our GDP comes from cities, two-third of our jobs are in cities…agriculture is only 13% of GDP!”

The statistics should make us pause to think. Most of our data reveals the tragedies of unplanned urban growth…it is at the cost of huge health costs even if “140 million Indians have moved up from poverty level between 2004  and 2009” in urban scenarios. Look at the asthma statistics in polluted urban cities…in contrast European countries are enforcing strict laws which come with  regulation/incentive packages to take care of the environment.

IN Barcelona and London they value environment more and better public transportation ensures people take the tube to work. Private vehicles are banned entry in core urban areas. Asked Dr Kathuria, “Do we in India want to be part of the problem or solution? Remember the rich can adapt to climate change, the poor can’t.” Even a 2 per cent degree Celsius rise in temperature is going to take many places around the globe under water – Mumbai and Goa are vulnerable!

The scenario we will see increasingly courtesy climate change is an influx of refugees  seeking asylum elsewhere – and in many places they are not granted asylum. In Flanders recently, Dr Kathuria learned about a “circular economic concept from start to finish designed on re-use and re-cycle principles…cement and plastics are being replaced by bio-materials.” Zero waste is introduced at design and planning stage, “You re-cycle or pay for disposal! You throw, you pay!”

One thing we must understand is that the carbon footprint of the poor is nil, it is only of the moneyed classes. A behavioural change must come naturally or be enforced and all this means not so little things like taking to the bicycle to move around town, “Remove stigma of riding a bicycle!” The rich in Europe are riding bicycles and it’s doing them a lot of good. Yes, but riding a bicycle in Flanders is different from riding a bicycle in Panjim! In the Indian urban scenario 80 per cent of buildings in cities are not built yet, they will be built by 2050 and then imagine the kind of high carbon energy which will be locked up. Imagine the nightmare of urban life in India!

I’m glad, my dears, I won’t be alive to see all this. But I do hate the thought of imagining my Bharatdesh slipping bit by bit under water. Think about all this and don’t just think. On that note it’s avjo, poiteverem, selamat datang, au revoir, arrivedecci and vachun yeta here for now.