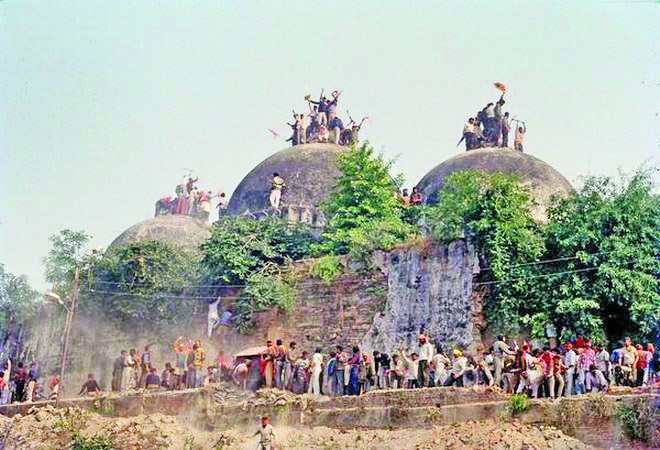 RUTHLESS: The Babri Masjid was demolited by the RSS workers who were reportedly incited and applauded by senior BJP leaders like LK Advani, Murli Manohar Joshi and even Narendra Modi and possibly Manohar Parrikar

Concerned that achhe din have failed to arrive, BJP president Amit Shah and RSS chief Mohan Bhagwat, are raking up the Ayodhya issue again. They are pressurizing the government to issue an ordinance as was done in the case of triple talaq or pass a law in parliament, bypassing the Supreme Court

Contrary to the impression sought to be created by RSS Chief Mohan Bhagwat, the leopard has not changed its spots at all.
In a series of public interactions with a range of intellectuals and political parties, Bhagwats claimed that the RSS respected the Constitution. He claimed that the organization was committed to an inclusive India and not an exclusive India.
However in the same breath Bhagwat insisted that Muslims should not just accept Hindusim but consider themselves Hindus. His logic was that they were Hindu converts. Please note that he did not ask the Muslims to be parts of Hindustan which would represent the entire country. He wants them to accept and respect Hindu customs and tradition. Which presumably means that among other things they should accept the veneration of the holy cow.
And worst of all, there is no compromise whatsoever on the RSS obsession with building a Ram Mandir on the site of the disputed Babri Masjid in Ayodhya.
It may be recalled that two decades ago when the Babri Masjid was demolished by the RSS kar sevaks to the cheers of BJP national leaders like LK Advani and possibly Manohar Parrikar, it unleashed a cycle of violence. The Chief Minister of UP had given an assurance that the Babri Masjid, reportedly built during the tenure of Babar as the first Mughal Emperor, would be protected.
The Prime Minister, who belonged to the Congress, Narsimha Rao, also had been assured that no damage would be done to the Babri Masjid.
In fact Lalu Prasad Yadav who was then chief minister of Bihar arrested BJP patriarch LK Advani who was leading a Rath Yatra towards Ayodhya for the demolition of the Babri Masjid.
I recall visiting Bicholim to check out how many Goans were participating in the Ayodhya yatra. All those who gathered that

day at Ayodhya were required to bring bricks with the symbol of Ram on them for constructing the Ram temple on the ruins of Babri Masjid. I found half a dozen brick klins making Ayodhya bricks.
REVISITING AYODHYA
Mohan Bhagwat and Amit Shah have twin reasons to step up the noise on building the Ram temple even though any construction of Ram temple on the disputed site would be illegal and amount to content of court as the matter is before the Supreme Court. The main reason for raking up the Ayodhya issue is political, not religious.
Although no definite proof has been provided that the Masjid that was demolished was built by Babar, Ayodhya was never a cause for large scale violence. This is despite the fact that at some stage in the early part of the century the situation was further complicated when an image of Ram was smuggled into the Masjid. But until the BJP launched the Ayodhya Yatra the situation was peaceful in Ayodhya. Both Muslims and Hindus worshiped their respective gods without any conflict. Advani’s decision to launch the Ram Ayodhya Yatra was entirely political and lit the flame to decades of violence across the country.
Significantly the Yatra began in the home state of the present Prime Minister Narendra Modi who was the principle organizer of the Yatra. Before the yatra the BJP had less than ten seats in the Lok Sabha and was considered a marginal party. In the elections that followed the demolition of the Babri Masjid, the strength of the BJP soared to over 200, making it the second largest party in the country.
After several efforts they manage to form the first BJP government under Atal Bihari Vajpaye — a coalition government which was deliberately headed by Vajpayee who had the image of being a moderate. The claim is that Vajpayee was horrified over the demolition of the Babri Masjid. But the fact remains that whenever the BJP is in trouble and fears that it may not get re-elected it has always fallen back on communal polarization. The worst symbol of that is the Babri Masjid demolition.
Three of Uttar Pradesh’s neighbouring states — Madhya Pradesh, Chhattisgarh, and Rajasthan, — and two other states, all ruled by the BJP, are going to the polls in November. Parliament itself completes its term in June 2019 and might go to the polls as early as January or February depending on the results of the elections to the five states.

DISCONTENT
The promises made by Modi have not been fulfilled. Swachh Bharat Abhiyan has not succeeded in making the Ganga clean. Nor did he generate achhe din. The twin policies of demonetisation and introduction of GST have angered the middle class traders who were the main supporters of the BJP.
The youth of India represent almost 40% of the voters in the Lok Sabha. They voted for Narendra Modi in 2014, not for Swachh Bharat.
They did not vote because he promised to bring all the black money back and deposit `10 lakhs in accounts of every Indian.
They did not vote for the Jan Dhan zero balance bank accounts (most of which have only `1 contributed by the banks out of the fear that action will be taken against them).
The young people did not vote because of demonetisation which Modi promised will eliminate all the black money. (The ground reality was that all the `500 and `1000 notes which were scrapped came back to the banks. The Reserve Bank has acknowledged that 99% of the currency declared illegal was converted into legal money at the banks. Interestingly among the largest amounts which were converted from old currency to new currency was from a cooperative bank in Gujarat with which Amit Shah was reportedly closely associated.)
The BJP won the youth vote by a huge majority for the first time because it raised expectations of very rapid economic growth which would create lakhs if not millions of jobs for those desperate for jobs in the country. Unfortunately, there has been very little fresh investment.
Consequent on the RBI crack down on huge defaulters to the banks and the sacking of several Managing Directors, including

Chandra Kochhar, the CEO of the largest private sector bank ICICI, banks don’t want to lend money. Anil Ambani still owes the banks `49,000 crore. Jet Airways, which is in deep trouble, owed the bank more than `20,000 crore. Air India, which was merged with Indian Airlines, is on the verge of closing down.
However despite these mind-boggling numbers, the biggest defaulter is not a private company but one owned by the government and financial institutions like the Life Insurance Corporation. The Infrastructure Leasing & Financial Services Limited (IL&FS) which has contracts for building large parts of the high ways, has LIC has its largest shareholder. The company owes banks `91,000 odd crore! Compare this with the `8,000 odd crore owed by Vijay Malliya and the `11,000 odd crore owed by Nirav Modi, not to mention the `34,000 odd crore lent by Chandra Kochhar of ICICI to Venugopal Dhoot, the owner of Videocon.
And while corporations and millionaires default, banks are coming down harder on small individual defaulters and trying to recover their losses from the aam aadmi.

DISTRACTING THE DISCONTENTED
In the last few days Mohan Bhagwat has been repeatedly demanding that the government should not wait for the Supreme Court decision on the Babri Masjid issue. Bhagwat is been insisting that the government that has a huge majority in the Lok Sabha should pass a law in the winter session of parliament to bypass the court and build the ram mandir.
Bhagwat is not even willing to wait for parliament to take it up as the proceedings may be disrupted by the Congress and opposition although both Amit Shah and Bhagwat are banking on the fact that the Congress, which has started courting the Hindu majority, will not dare object to any law or even ordinance to build the Ram Temple on the ruins of the Babri Masjid. The argument is that if the Modi government passed an ordinance to ban triple Talaq to benefit Muslim women why can’t it pass an ordinance to build a Ram Temple. The logic of the RSS and Amit Shah is very simple. They believe that they have a Hindu government in the Centre and most of the states in the country. This may be the best opportunity to build the Ram temple. Since their logic is that lord Ram blessed than with 200 seats last time, maybe this time around if the ordinance is passed they will get 400 seats out of 520 in parliament. UP contributed 85 seats last time round, which is why building the Ram temple is on top of the agenda of the Hindutva brigade headed by Amit Shah and Mohan Bhagwat.
CONSEQUENCES OF RELIGIOUS POLARISATION
Unfortunately the BJP seems to be ignoring the other side of the coin. Raking up the Ayodhya issue might win them some votes, but it might also have bitter consequences like last time. It must be recalled that the post-Godhra riots where Muslims were systematically killed in Gujarat when Modi was a chief minister were a direct consequence of the demolition of Babri Masjid and the subsequent violence in Godhra. The riots that Bombay witnessed later where the targets were the stock exchange and the traders market and the government owned five star hotels, were in response to the killing of Muslims in Gujarat. The bloodletting did not stop there.
As recently as in 2008, just ten years ago armed terrorist all the way from Pakistan landed in the cuff parade coastal area of South Bombay and held land marks of Mumbai like the Taj Hotel and the Oberoi hostage for almost three days. It was as

horrible as the 9/11 attack at the Twin Towers in New York, allegedly carried out by Osama Bin Laden.
The communal situation is already very tense following the crackdown, particularly in BJP states, on Muslims and Dalits on suspicion of killing ‘holy’ cows. The situation has become even more tense after the arrest of Dalit leaders in the Bhima Koregaon war memorial event. The arrest of civil right activists further worsened the atmosphere. The Supreme Court judgement in the Sabarimala case has given yet another excuse to right wing BJP fanatics to proclaim that the Hindu religion in under attack.
If the government passes an ordinance or a law on the Babri Masjid and the building of a Ram temple in its place, it will make Indian another Pakistan. It will be even worse in Goa which is always enjoyed communal harmony. The Catholics are already feeling under attack and they may fear that the next target of the BJP, if it successfully issues an ordinance on the Ram temple, would be to demolish the Bom Jesus Basilica.
Hopefully Modi, Amit Shah and Mohan Bhagwat realise that Hindus will reject them if they issue an ordinance or pass a bill to build a Ram Mandir without the consent of the Supreme Court. What distinguishes us from Pakistan and other fundamentalist countries is the Constitution which guarantees all citizens freedom of worship.