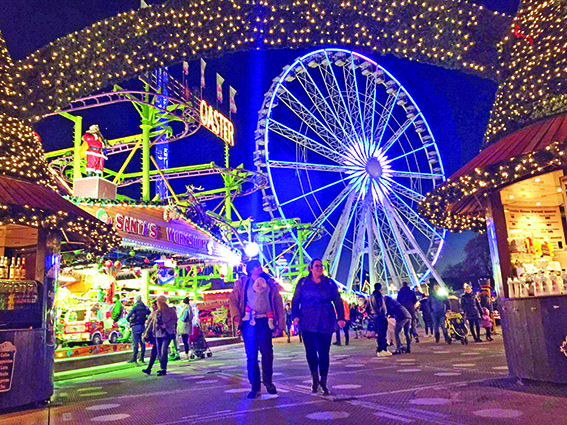 We asked actress and Shakespearean history author, Eva Griffith, holidaying for the first time in Goa after 30 years, to tell us what Christmas can be like back home in London. She agreed to put it down in words, and memories came flooding back…

The nightmare begins, probably, somewhere in August, when some misguided but well-meaning and jovial BBC News presenter says “Ha ha ha. It is” so-and-so “many days to Christmas”. At that moment, across the British nation, hearts that are ready for action in countless other useful ways heave in and let out a moan-full sigh of horrified resignation. Yes, sooner than we are expecting, it will be “that time of year again” when we, for some astonishing reason, in order to celebrate the homelessness of a poor couple in an unfamiliar environment — giving birth to a baby (of all things) in an outhouse of a hotel — hare around our cities, in my case London, to make the commemorative day “special”.
Of course, the Baby Jesus was special and deserving of a special commemorative day. (I truly believe that.) But why, in response, all the fuss and the bother and the awful expense for everyone — poor and rich alike? I’m not sure that was the idea… I mean, just sitting quietly in a church or temple or other contemplative place, thinking about today’s refugees and the homeless people all over the world; people suffering oppressive regimes having babies in unfamiliar places all over the world… shouldn’t that make a “Christmas”? Surely that should “make” it?
I don’t really know what preparing for Christmas is like in a Goan household. But I do know what it is like in an English household for the woman involved. For a start, in London, it’s a very cold time of year to go shopping. And you have to go shopping. Everyone has their favourite vegetable to go with the turkey. I have to have red cabbage; my husband has to have roast parsnips; my son has to have dauphinoise potatoes.
But in this way, based on food prep alone, the run-up becomes a marathon hurdling race of advance culinary expertise, also meaning there should be enough room in the fridge-freezer for everything at the right moment. I order a box of meat from a place up in Scotland. By the time it arrives the red cabbage is probably frozen in advance. There is already brandy butter (to go with the minced pies) in the fridge. The day before (Christmas Eve) I cook the dauphinoise in a saucepan, prior to putting cheese on top and baking it on The Day, along with the glazed carrots (in another saucepan, of course). We might risk some of this along with a boiled ham on Christmas Eve night. I have to remember, for example, that NOBODY LIKES Christmas pudding. But somehow one always gets bought. This is in the same way nobody likes Christmas cake. It will just make us extra fat. But somehow, one always gets bought.

Then, of course, there is the presents’ shopping and trying to remember — or have a vague idea — what people might like ‘for Christmas’. This is very difficult. Well, I guess, everyone knows how difficult it is to buy presents. That is a ‘universal’ for those who can afford to buy presents. I don’t have to explain that one. But that doesn’t prevent me from going to The Middleclass Place To Go for every Middleclass English Woman in London come Christmas time: John Lewis, in Oxford Street. With a happy, hopeful face, being as polite as possible while slipping around and past the mass of other individuals, all hoping for The Perfume or The Sweater for that loved one. It doesn’t stop me from hoping I get it right this year. I never do.
And then I think of my mother — and how hard she worked every Christmas — to try and get it right that year. And I notice, as I’m looking at the computer terminal here in Goa, that it is January 2, 2019. It is a year to the day when my mother died. I knew it was coming but I hadn’t noticed. And a heartless year has passed since. As I start crying and I think of that heartless year gone by and the people who — for some reason only they know — don’t love me any more, I think of all the things I have lost, including the sweaty, loving mother, poring over the Christmas cooking who, when I was a child, filled my stocking with tangerines and nuts when she had nothing else to give.
Seeing my tears, my friend Tara throws her arms around me and tries to cheer me up. I remember I was lying next to my mother when she died, you see, and this was certainly a kind of blessing. I looked after my mother. This was also good. And now as I remember, going 30 years back (no joke, it was 30 years ago) coming to Goa to be with my father for the aftermath of Christmas Day itself.
For Christmas, as all good Catholics know, is twelve days long. Yes, it is not just the English song that makes it the ‘Twelve Days of Christmas’ the feast really does last 12 days, the last being on January 5. My father, Kenneth Griffith, was writing a book about his experiences in India where he had just made a film, and we stayed in Dona Paula at the O Pescador Hotel while he wrote this book.
I remember coming from the airport, when there was no flashily smooth road, that it was very dark. But what twinkled through the darkness was the paper lantern stars and sparkling lights that Goan families put on their verandahs. I genuinely became emotional and full of wonder at the beauty of it all… and there were cribs. True, heartfelt cribs laid out on the verandahs. Faith is so special when it is meant. In the case of Christmas, it should be about and solely about the Birth of Hope. For this is another troubled time for the world. We are still hoping, tangerine and nuts in our hands, aren’t we? I hope so.
I had decided, some time ago, to avoid the English Christmas this year, by coming out to Goa. Indeed, it was always what I intended to do after my mother died. Come to Goa to find Christmas. To my surprise I find myself writing a book, in that same ‘O Pescador’ hotel, even in the same block, where my father wrote his book so long ago. Later on at my friend’s place I find that she has put cashews in my breakfast. And later that day my husband and I shared a tangerine. A tangerine or two.

(Note: Dr Eva Griffith began her career as a child actress, a theatre historian and researcher; her parents were the Welsh actor and documentary filmmaker Kenneth Griffith and Doria Noar. She has authored several books including `A Jacobean Company and its Playhouse.’ She is currently re-discovering her interests in Goa and India.)