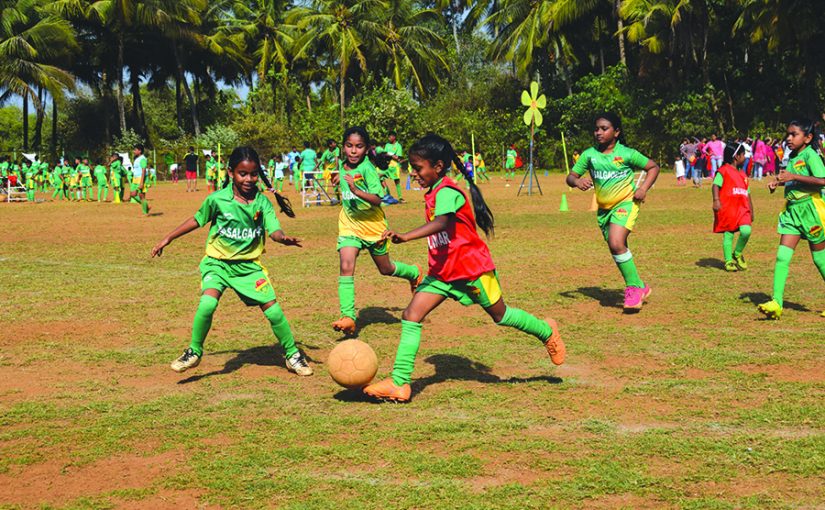 GRASSROOTS FOOTBALL FUN: Amidst a colourful and electric atmosphere, the 6th edition of Salgaocar FC’s annual Community Outreach Program came to a close at the Chicalim Panchayat Ground on Sunday, March 10, with their Grassroots Football Festival for children enrolled in the program and their parents. Since its first edition in 2013, the program has been a roaring success. Held every Sunday between October 2018 and March 2019, this year the program saw the registration cross 500 children from in and around Vasco. Divided into two batches of 6-8 years and 9-11 years, they are trained every Sunday under the watchful eyes of highly qualified and experienced Salgaocar FC coaches. A total of 40 licensed coaches and volunteers were involved in the program this year. The most promising players from the program are absorbed into the Club’s U-13 youth team. This year also saw the introduction of Baby Leagues for children in the 8 and 10 year age group

THE ensuing very crucial Lok Sabha elections will be our final opportunity to politically trash the BJP and restore our country’s secular outlook that the founding fathers of the Constitution had so dedicatedly toiled for. To restore democracy our India must wholeheartedly and selflessly unite against the deviously communal, corrupt and very divisive BJP. Over the last five years under Narendra Modi our great country has ebbed into dire straits. The BJP has over these years trampled on even the independence of the judiciary. And more importantly while eroding the autonomy of the Reserve Bank, Election Commission and the CBI, Narendra Modi and the BJP have ruptured the very secular fabric of our great nation.
— Aires Rodrigues, Ribandar

MOPA COMPENSATION
THE local residents of Mopa should not accept the measly compensation that the government is giving them, simply because the compensation is much lower than the market rate of land in Mopa. The minimum that the Mopa land is worth now is about 1,500 to3,000 per square metre. As of now, the Mopa residents have the ability to retain their land for agricultural purposes which will remain for them a perennial source of income from the produce of the land.
In a place like Panaji, which is well developed, the market value of land is at least if not more than 1,00,000 per square metre. Why should the Mopa residents settle for less than at least1,500 to 3,000? It may be stressed here that if the Mopa airport comes up, and God willing it will not, then the prices of the land in that area will skyrocket and it will be the local residents of Mopa who will suffer the most since they will not get value for their land due to the measly compensation being given, and they will not be able to afford the higher standard of living in and around Mopa, but on the contrary, those who have now bought land there such as the speculators will be the major beneficiaries if the price of land greatly appreciates there. Mopa is not developed now, but the people can gain steady livelihood from their land through agricultural related activities. The Mopa residents would do well to not squander their land by way of measly compensation but retain their fertile land for their source of living as Mopa is now, which will be the much, much better option. If Mopa comes up, land in Mopa might jump up to50,000 to 75,000 per square metre and it will be the residents of Mopa who will suffer the most because their little money from compensation will not be worth later and their livelihood will become miserable. — Elvidio Miranda, Panaji VOTE WISELY! A COMMON lie spread by the destructive communal leaders of RSS/BJP is that the original inhabitants of the entire Indian region were Hindu and they alone have a first birthright over resources, not other minorities living in this country. Due to this Hindu majority have been voting only BJP in recent years because for most religion comes first and not nation. BJP leaders say they don’t believe in playing politics of religion to garner Hindu votes but they always do and have been deliberately doing so all these years to win elections. Otherwise why raise religious-based issues like Ram Mandir construction in Ayodhya and show enthusiasm in solving this issue every time before elections in India? Last Lok Sabha elections they promised many things including much-hyped achhe din for common man with sure deposit of15,00,000 in every bank account. What they have given is bure din or bad days and unleashed stupid exercises like demonetization overnight in the name of bringing back black money and even hijacked our the Supreme Court, CBI, RBI, ED, etc.
The people of the country should vote wisely this time. Reject communal parties run by fascist right-wing organisations using remote control from behind which are playing with religious sentiments for political gains. Vote for real secular parties using common sense in the upcoming elections. Long live secular India! Down with termites…communal punks, the real enemies of India. Hope the Election Commission will do its job without bias and take quick, strong actions against communal parties asking for votes in the name of religion and successfully conduct fair and free Lok Sabha elections in this great country.
— Jerry Fernandes, Saligao

MAKHAN-CHOR GOVT!
IT is well said a people deserve the government they’ve got. We people of India richly deserve the current dispensation in state after state and at the Centre! Once upon a time we were small-time “makhan chors” but now we’re big time “makhan chors” and revelling in it. Our governments have little money for paani, bijli, sadak for aam aadmi and 40% of Indians are still struggling to earn enough income to afford roti, kapda, makaan to be happy and stay fighting fit.
Our sarkar has money to buy fighter air planes and strike secret deals of graft, gallivant around the world hugging world leaders, build colossal statues and other monuments of vanity, finance mega religious celebrations…there are ample funds for squandering on petty, trivial causes — but none for investing in the real happiness quotient of the people (except in the case of 22% of khaas aadmi who are rolling all the way to bank hand-in-glove with deals with politicians so that life is perennially party and showing-off time for them. So that aam aadmi may gawk at their extravagances and say wah, wah, taliyan — or turn away disgusted by the quality of moneyed classes in India.
Say it is one long saga of corruption and bribery all around. But when all the makhan is over will we start killing one another in a mahaghatbandan of asura and deva armies — it is already happening! Although it’s getting harder and harder to differentiate who is asura and who deva! There is so much nautanki camouflage and lies and counter-lies to fool, deceive …and carry on stealing from the public kitty — killing off the media and others who ask questions is so much collateral damage en route to dictatorship, no problem.
Who wins and who loses? Do we want India/Bharatdesh to continue to degenerate into militarized countries like Pakistan, Bangladesh, Syria, Venezuela (any number of examples around the world) but on a much larger scale? A banana republic where people in power and out of power too continue to live in stress, nurturing stress and dying stressed out with nothing but curses for whoever the “makhan chor” government of the day is?
Actually, from “makhan chori” we’re down to “dudh chori” and now it is “paani chori”….just to make some kind of an analogy contrasting the chupke chupke chori of old with the khulam khullah chori of today!
— Pankajbala R Patel, Panaji